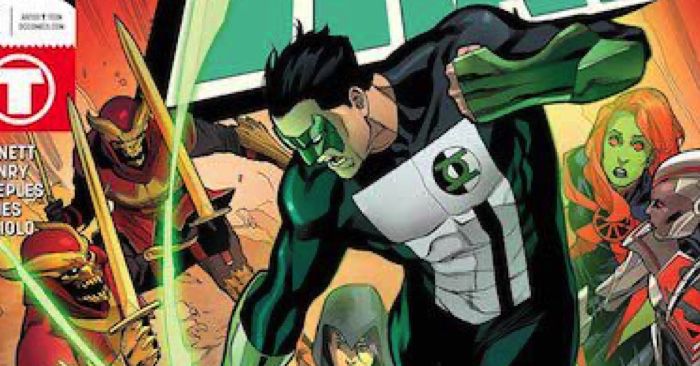 If you’ve been around for a while, you may have seen some of my Fashion Disasters articles, where I highlight the poor sartorial choices of superheroes who just can’t seem to get their act together. Superhero comics truly are the gift that keeps giving for those of us who are endlessly entertained by spandex wrought hideous, but every so often a hero comes along who flips the script. Who serves looks from their debut appearance onward. Who looks at the genre’s weird headsocks and tiny gloves and excessive zippers and says: “Not today. Not ever.” They are the few, the proud, the Fashion Heroes. Today: Kyle Rayner, Green Lantern!

This year marks the 80th anniversary of Green Lantern—at least if you’re counting from the debut of the OG Lantern Alan Scott—so it’s a good time to raise a glass in Kyle’s honor. Now, to be fair, the Green Lantern franchise is generally an extremely stylish one, although I don’t think anyone would have predicted that based on Alan’s original look:

Bless your heart, old man, but this is a mess.

The Stack Newsletter
Sign up to The Stack to receive Book Riot Comic’s best posts, picked for you.
Thank you for signing up! Keep an eye on your inbox.

But the franchise turned it around with the 1959 introduction of Hal Jordan, who I wouldn’t spit on if he was on fire but who I have to admit is a straight-up fox with one of the best costumes of all time. Equally foxy and stylish (and much more likable) is our second Earth-based GL, John Stewart.

(Guy Gardner, of course, is a proud Fashion Disaster, but that just makes me love him more.)

But as good as Hal and John’s looks are, they are essentially creatures of habit and have remained static ever since, temporary dalliances with giant evil shoulder pads aside. I mean, Hal’s costume is literally just the factory settings. It would take an artist to truly tap into the power of a Green Lantern ring to create a versatile wardrobe, and we got that artist in Green Lantern v3 #48 (January 1994).

Kyle’s first costume was, of course, Hal’s, since again: factory settings. He quickly redesigned it, though, and gave us this:

Kyle was arguably the poster child of the “kill off the Silver Age guy and replace him with a young hottie” trend of the ’90s. As such, he is a pretty big departure from basically everything about Hal, and we see that in his costume. It’s sleekly black and white with only accents of the traditional green. It’s interestingly asymmetrical, with a modular GL symbol instead of the classic iconography—fitting, since when Kyle was wearing this costume there was no Corps to be a part of. It’s legitimately sort of weird, because my boy is all about that editorial aesthetic, and so we’ve got those chunky gauntlets and the infamous crab mask, a striking departure from the traditional domino.

I just want to remind you all that this look debuted in 1994, and yet there is nary a pouch to be seen. No unnecessary armor, no straps or buckles, no tiny gloves and stupid jacket, no headsock. Just clean, sleek lines with enough detail to be interesting but not distracting. (Plus, as far as this millennial is concerned, the ultimate in Cute Boy Hair, though you can’t really see it on this cover.) Kyle Rayner, everyone! Hitting it out of the park on the first try!

Kyle spent nearly a decade in the classic crabmask, but somehow still gained a reputation for constantly changing his costume, possibly because his other uses of the ring were so much more creative than his predecessors had been. At any rate, it was a running joke in “Sins of Youth,” DC’s best crossover event ever because the concept behind it was not “heroes will fall and everything will change forever (temporarily)” but “wouldn’t it be funny if everyone was the wrong age?” A de-aged Kyle sports a different costume in pretty much every panel, because he’s perfect. A sampling:

“Sins of Youth” turned out to be prophetic, because not long after, Kyle finally changed his look, after finding a huge stockpile of Green Lantern energy stored in the sun (don’t ask) and absorbing it to become the godlike Ion:

Did someone say bold? Did someone say editorial? Did someone say “it’s the early 2000s and we’re really excited about digital coloring effects?” I mean, that is one (1) glowy boy! Yes, it is a little, um…phallic…but remember, we’re pushing boundaries here! Also, not a lot of male superheroes can pull off a mostly-white look, but Kyle is rocking those messianic vibes, well done.

Eventually Kyle relinquished the Ion power, resurrecting the Guardians in the process, and switched to a new costume to indicate that he was no longer a rookie:

And he nails it again. The lines are more classic, echoing Hal and John’s costumes, but the details—the squared off angles of the green chest piece, the textural details—make this fully a Kyle look. I love the glowy logo on his chest (again, it was the early 2000s, they were stoked about lens flares, let them have it). I’d also like to note that while the ribbing on the arms and legs and the clunky boot buckles are a hat tip to the “realistic” rubbery redesigns that were a trend in 2002 thanks to the success of the X-Men movies, they much more strongly evoke a more subdued version of the detailing that the New 52 would vomit all over everyone’s costume, or even the textured athleisure aesthetic that came into vogue about five years ago. My boy Kyle, ahead of the curve as always!

Kyle got another power up when his ex-girlfriend Jade died and bequeathed all of her power to him (SIGH), and returned to the Ion name, but not the costume:

Okay, I’m going to say it: Kyle has made his first misstep. That mask is very upsetting and I don’t enjoy it. But the rest of it? The glowing chest symbol? The field of stars on the black parts of the bodysuit? Outstanding. (Yes, he definitely stole the stars idea from his other ex-girlfriend, Donna Troy, but let’s say it was a tribute. More comics dudes should adopt costume elements from the women around them, I think.)

Kyle’s next new look would come when he joined the Green Lantern Corps Honor Guard in the aftermath of the Sinestro Corps War, and it’s surprisingly tame for my boy:

To be fair, Kyle had been through it in the war and maybe wasn’t feeling his most creative. Also, the resurrected GLC was pretty new and maybe he didn’t want to embarrass everyone else by being too much cooler than them. Either way, this is basically Hal’s costume/the standard look, with the GL logo over his heart instead of dead center, and a slimmed-down version of the original crab mask. It’s an elegant blend of his original costume and the standard issue Corps uniform, and since both of those looks are so solid, it’s hard to really go wrong.

Kyle stuck with this basic template even after switching corps:

His Blue Lantern uniform has the same lines as his Honor Guard uniform, but, you know, blue, and with the Blue Lantern Corps logo instead of the GLC one. Also, the white gloves have been dropped out for a duochrome look. But it’s still a solid aesthetic, if a little jarring outside of Kyle’s usual color scheme.

Kyle went on to master all seven rings and become a White Lantern, and you know what? He’s trying, okay? There aren’t a lot of design options available when it comes to solid white, and also he was maybe a little too influenced by the new Tron movies that had just come out, but he’s doing his best and I’m proud of him. Again, the all-white messianic look is tough—just imagine what a hash Alan Scott would have made of such a mandate.

Eventually Kyle relinquished 6/7 of all that power and returned to being a Green Lantern again…but he also joined the Omega Men and became the Omega Lantern, because why not?

Okay, I was kidding before when I said Kyle really dug Tron, but…I think Kyle really dug Tron? This is sort of the “rogue undercover” GL look, in that it’s still, you know, skintight and glowy, but a little less obvious. I sort of love it? Especially that combo GL/omega symbol, that’s a nice touch. Look, he’s trying to be subtle, bless his heart.

Most recently, Kyle seems to be attempting to recapture his early career, as he returned to a variation on his original costume, and rejoined the Titans (yes, he was on the Titans briefly in the ’90s before he joined the JLA, and yes, that’s super weird):

The crab mask is the slim one he’s been sporting for the past decade, the logo is closer to the traditional one and not nested in the black stripe the way it used to be, and the stripe itself is narrower, but it’s functionally the same look and still a strong one. The return to it, however, plus placing him on the Titans, just indicates to me that DC still isn’t totally sure what to do with Kyle.

In fact, aside from the Green Lantern 80th anniversary special, Kyle has been pretty much MIA since Titans was canceled last year, which is a damn shame, since he’s a great character. But the one-time rookie has been around for a while now, and he’s proven himself to be pretty durable. I’m looking forward to his eventual return, and I’m especially looking forward to seeing what he’s wearing. Given his history, I can only assume it’ll be something great.

Teaser: Riley Keough Stars In Amazon’s Latest Miniseries ‘Daisy Jones & the Six’
Bill Maher Confesses He Flies Private, Calls Out Celebrity Hypocrisy
Trailer: Netflix Latest Comedy ‘We Have a Ghost’
Nickel Creek to Release Their First New Album in Nine Years
15 Types Of Chains For Men and How You Should Wear Them in 2023