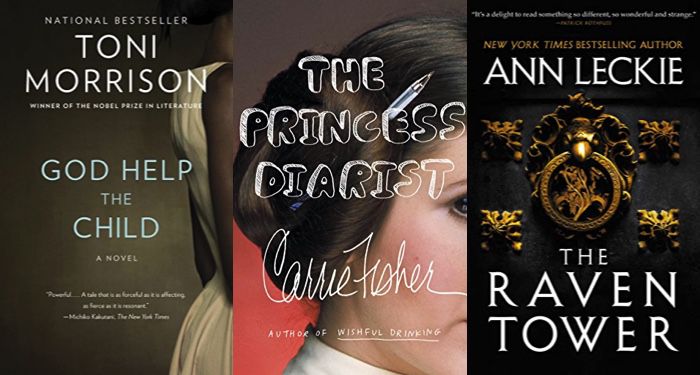 Blood Orange by Harriet Tyce for $2.99

The Light Between Oceans by M.L. Stedman for $2.99

Remarkable Creatures by Tracy Chevalier for $1.99

Welcome to Lagos by Chibundu Onuzo for $1.99

Dorothy Must Die by Danielle Paige for $1.99

Dark Tales by Shirley Jackson for $1.99

The French Girl by Lexie Elliott for $1.99

A Love Hate Thing by Whitney D. Grandison for $1.99

Under the Udala Trees by Chinelo Okparanta for $2.99

All Out: The No-Longer-Secret Stories of Queer Teens Throughout the Ages by Saundra Mitchell for $3.99

The Pillars of the Earth by Ken Follett for $1.99

X: A Novel by Kekla Magoon and Ilyasa Shabazz

Sick: A Memoir by Porochista Khakpour for $2.99

A Witch in Time by Constance Sayers for $2.99

The Rules of Magic by Alice Hoffman for $2.99

A River in Darkness by Masaji Ishikawa for $1.99

Younger by Pamela Redmond for $1.99

Vita Nostra by Sergey and Marina Dyachenko for $2.99

Marina by Carlos Ruiz Zafon for $2.99

The Astonishing Color of After by Emily X.R. Pan for $3.99

Chocolat by Joanne Harris for $1.99

The Tattooist of Auschwitz by Heather Morris for $3.99

Court of Fives by Kate Elliott for $0.99

There Will Come a Darkness by Katy Rose Pool for $2.99

And Then There Were None by Agatha Christie for $1.99

Not So Pure and Simple by Lamar Giles for $1.99

Sawkill Girls by Claire Legrand for $1.99

The Undoing of Thistle Tate by Katelyn Detweiler for $1.99

Strange Practice by Vivian Shaw for $4.99

This Viral Glass Bag Is Waiting for You on Amazon
Teaser: Zoey Deutch Hulu Satire Movie ‘Not Okay’
‘Black Ink Crew’ Star Ceaser Emanuel Claims He Didn’t Abuse Dogs, Was Set Up
Bill Cosby Jurors Must Restart Deliberations After Nearly Reaching Verdict
Without My Abortion, I Would Not Be New York’s Health Commissioner