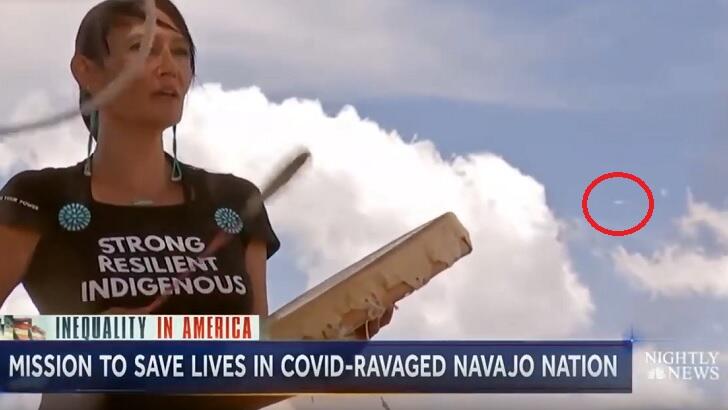 An attentive viewer watching NBC Nightly News earlier this week spotted a curious cylindrical object zipping across the sky in the background of a segment. The intriguing moment reportedly occurred during Monday night’s broadcast as the program was detailing how the Navajo Nation has been struggling with a water crisis as the same time that their community is being ravaged by the coronavirus pandemic. As reporter Cynthia McFadden discusses these issues, a Native American woman is shown playing a drum with two fairly large white clouds in the sky behind her.

The scene takes a strange turn when a peculiar white object suddenly emerges from one of the clouds, flies in a straight line through the clear blue sky, and then vanishes behind the other cloud. Were it not for a viewer who spotted the strange scene and reported it to MUFON, the proverbial UFO sighting likely would have gone unnoticed by the world at large as it lasted only a few seconds. While some imaginative online observers have suggested that the object was headed toward Area 51, Navajo Nation is approximately 375 miles from the notorious military base, which makes such an assumption something of a stretch.

Of course, the true mystery is what the nature of the object is, not where it is going. To that end, while some UFO enthusiasts have argued that the anomaly is a visitor from another world, more skeptical viewers have offered up the prosaic possibility that the ‘alien craft’ is merely an airplane that looks exotic due to the angle of the shot and how far away it is flying. With that in mind, what’s your take on the puzzling scene? Share your theory with us at the Coast to Coast AM Facebook page.