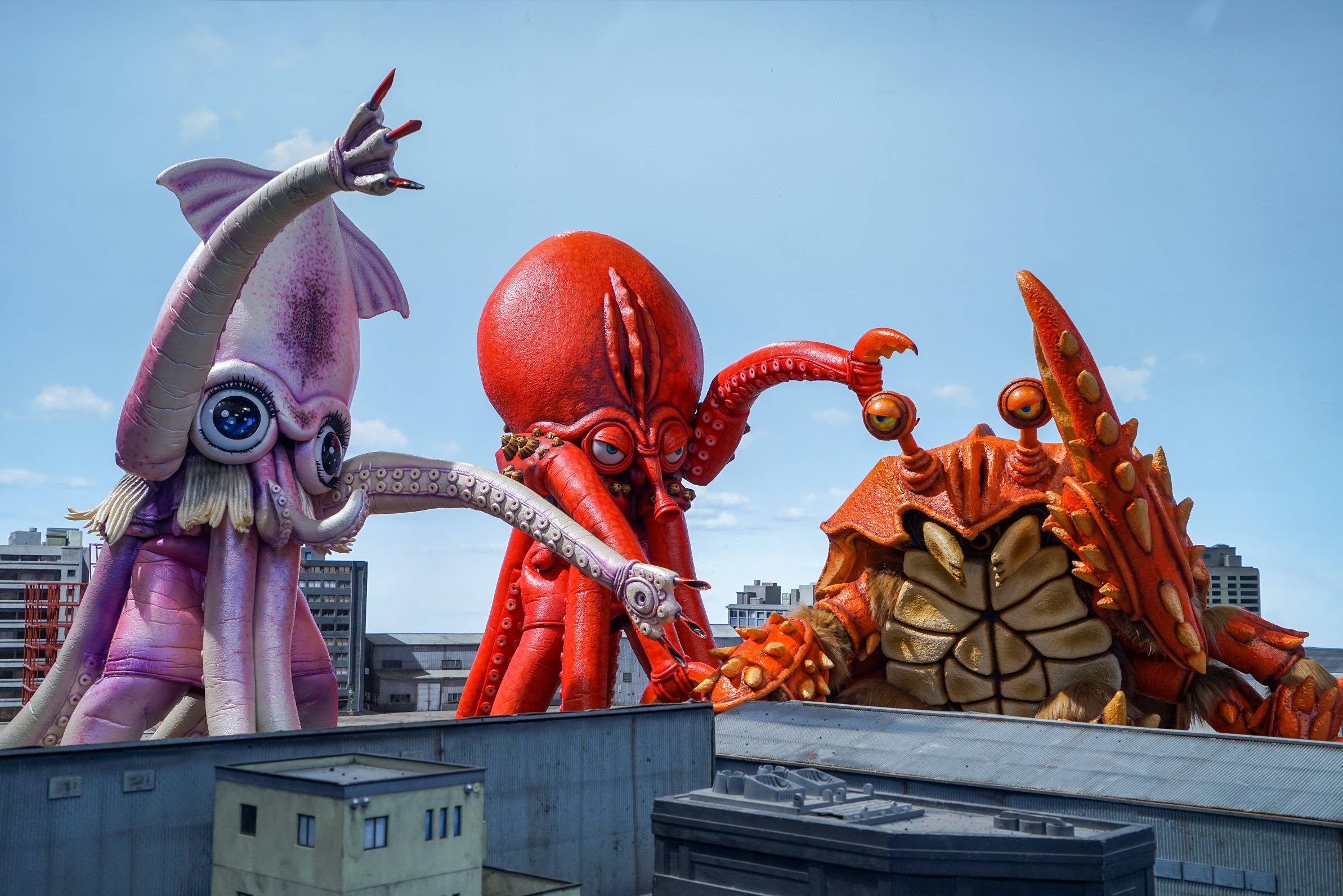 While it has its moments, Monster Seafood Wars wears its central joke much too thin, and pads itself with inane sequences. Our Culture reviews the film here for its selection as part of the 2020 Fantasia International Film Festival.

Told in flashback, Monster Seafood Wars features a giant squid, a giant octopus, and a giant crab wreaking havoc in Tokyo. Their appearance is allegedly the result of the mysterious Setap Z serum, created by a young man named Yuta (Keisuke Ueda). Yuta created the serum with noble intentions (to combat the global food shortage), but things seem to have gone awry. Nevertheless, will in-fighting with his rival in the newly-formed S.M.A.T. (Seafood Monster Attack Team) reveal that there’s more to this than we’d first thought? After fighting the beasts with vinegar cannons, Japan is gripped by a new fad: monster seafood cuisine.

According to director Minoru Kawasaki, the film’s origins lie with one of Godzilla’s fathers, Eiji Tsuburaya. Kawasaki has said that, in an idea that Tsuburaya had before WWII, “a giant octopus landed in Tokyo and went on a rampage. The army killed it with a vinegar gun at the foot of Mt. Fuji, and the people ate it at the end.” Whether or not this is true, it is lovely knowing that Kawasaki is a devotee of Mr. Tsuburaya.

The idea that giant monsters might become a gourmet hit is a novel one, but it is stretched to its limit over the film’s runtime. Indeed, amidst the rush to find a way of combatting the monsters, the film detours into a near fifteen-minute sequence of various people (many of whom having little to do with the proceedings) reacting in awe to the monster food. The conspicuous look to some of these individuals might indicate that they’re recognisable as minor celebrities in Japan, though this is conjecture. Whoever they are, the sequence grows tiresome, and any cultural relevance these people may have is lost on this Western critic – my apologies.

The characters aren’t particularly developed, and it is more the film’s bizarre scenarios that carry us forward. Indeed, the characters aren’t helped by the fact that an unconvincing romance is inserted into the proceedings; it even features the old chestnut of two men betting on the love of a woman. As one can imagine, such a dynamic often makes these characters seem uncharismatic to say the least.

On the other hand, the monsters are quite engaging! We have Takolla, the giant red octopus; Ikalla, the giant pink squid; and Kanilla, the giant crab. The monster costumes are charming, with Takolla and Ikalla sporting massive eyes which make them rather cute. Attentive viewers will recognise much of the sound design surrounding the monsters as that of Toho’s classic monster films. If I’m not mistaken, Kanilla’s roar is mixed from Hedorah’s roar (from  1971’s Godzilla vs. Hedorah), which itself was a remix of another monster’s roar from 1966’s Ultraman (it’s Kemular’s roar for those interested!).

It is something of a shame that several sequences involving the monsters are simply told to us rather than shown. We’re told that the military launched an attempted attack on the monsters, and that their soft outer skins rendered them impervious to attack. Sadly, we never see this in action.

The film doesn’t quite manage any overt political or social consciousness as is often found in Japanese monster cinema, but there are traces here and there. Regarding the serum Setap Z, there is a brief discussion of the double-edged nature of scientific discoveries; and of the need to make sure they’re safe before they’re released into the world. There’s also a light comment on consumerism, with one individual decrying the eating of monsters, only to emphatically call for more monsters to be killed after he’s tasted their meat. This is very silly and quite funny.

There’s even a slight joke at Prime Minister Shinzo Abe’s expense. Appearing on television, an unnamed Japanese Prime Minister (who happens to resemble the LDP leader) speaks about S.M.A.T. and the monsters. The PM says how S.M.A.T’s name is suitable for the Reiwa Era (in reference to the current emperor, Naruhito), as is his new slogan, “Reclaim Japan.”

Ultimately, Monster Seafood Wars is a bit too self-indulgent. It’s clearly aware of its humour and novel concept, but it draws it out to exhaustion. Many scenes that start out as funny drag on until the wit has been depleted. There’s a moment wherein a monotone scientist appears in a comically-sparse office to explain the creation of the serum, but the humour of his subdued performance is undercut by how long the scene goes on for.

This is still a good-natured film, and I cannot fault its heart. However, if you’ll excuse the expression, I just wish there was more meat to it.