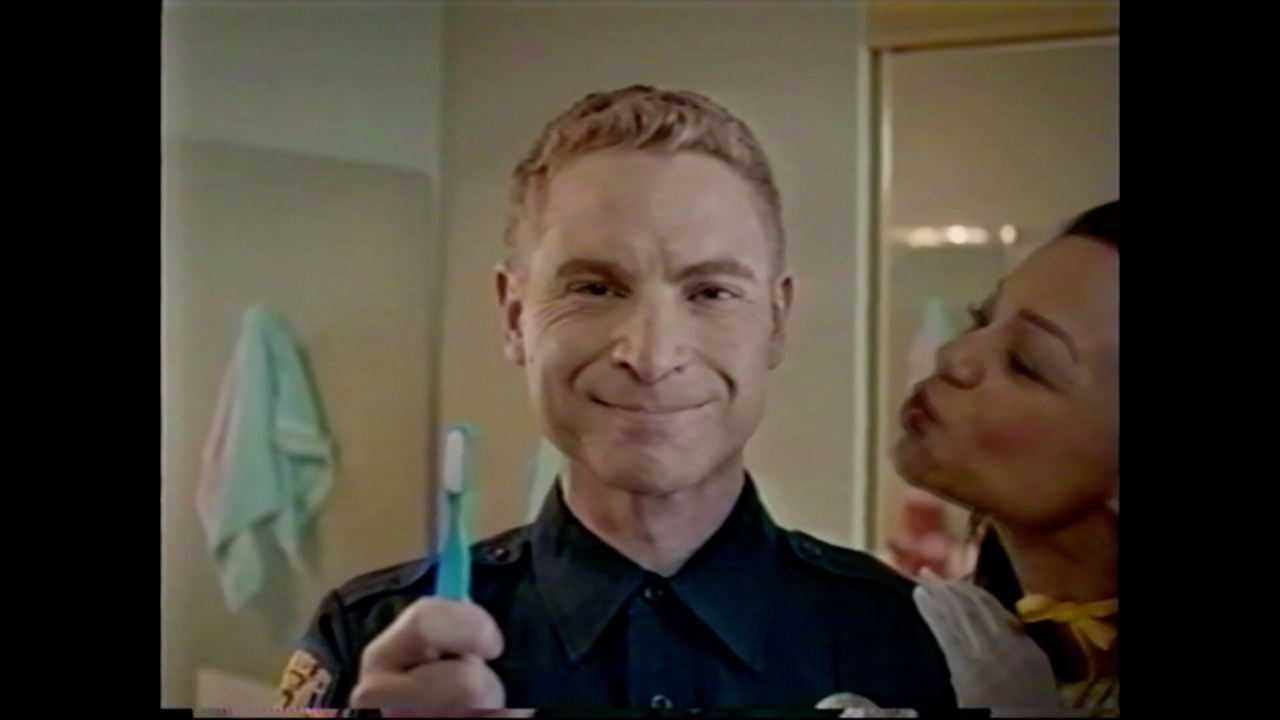 Survival Skills, Quinn Armstrong’s feature debut and an expansion of his 2017 short of the same name, is a jet-black satire of American law enforcement and an affecting rumination on society’s response to domestic violence that is presented with a unique aesthetic. Our Culture reviews the film here as part of its selection for the 2020 Fantasia International Film Festival.

Framed as an instructional video for police cadets entering the fictional Middletown Police Department – which exists to serve the equally fictional town of Ronald Reagan’s dreams, an Americana dreamscape that belongs to 1950s sitcoms and is, as our narrator (Stacy Keach) tells us, “89% white” – Survival Skills follows rookie cop Jim Williams (Vayu O’Donnell) during his first year on the job. Jim is conjured into existence via outmoded movie magic, is given a doting girlfriend (Tyra Colar) and a brightly decorated suburban home, and then sent out to work. But his rose-tinted glasses begin to slip when he is called to a domestic violence incident at the home of Lauren Jenning (Madeline Anderson), her daughter Leah (Emily Chisholm) and her violent husband Mark (Bradford Farwell), and he begins to see the world for what it really is.

Survival Skills employs a truly innovative formal system through which to communicate its narrative and themes; much of the film is designed to look like a lost VHS tape from decades ago, a shamelessly propagandist instructional video complete with early-1990s CGI, rampant tape hiss and the kind of cringe-worthy narrator common to corporate training materials everywhere. It is admirable that this aesthetic never feels like a gimmick; it is used for a specific and very clever purpose, satirising the false public image that any given police department would like to project – one that attempts to hide any number of systemic and deeply troubling issues that have long been endemic to American law enforcement.

In fact, the film generates much of its black, farcical comedy from the narrator’s attempts to (both figuratively and literally) control the narrative as Jim begins to develop free will and the whole thing veers off-course. And even once Keach’s narrator has lost all power and the rookie cop has started to dictate what we see and hear, it is interesting that scenes of violence are still hidden by heavy glitching and distortion, the film hinting at the side of American policing – and even American culture – that the establishment doesn’t want you to see.

Similarly to a film like Pleasantville (1998), then, Survival Skills borrows an outdated aesthetic to indict outdated values. In the second and third acts, hilarious retro cheese gradually gives way to the disturbingly surreal as Armstrong reflects on the ways in which America routinely fails to achieve justice for the most vulnerable (here represented by Lauren and Leah as they try to escape the abusive Mark). So this is a film that has not a shred of sympathy for the police as a unit, and utter contempt for the system individual cops represent. However, it clearly does ask us to identify with just one officer: Jim.

And sympathising with Jim isn’t difficult; O’Donnell gives a purposely wooden performance (Jim is often called “RoboCop” by those around him) to create a picture of a man who has been brainwashed into perceiving the world as a battle between the forces of good and evil, and his slow realisation that justice does not always prevail is genuinely heart-breaking. However, it must be said that it feels odd to sit down with a film that asks us to side with a police officer in 2020, given the charged debates that are currently raging around police brutality and accountability – and our alignment with him becomes genuinely uncomfortable at a point in the narrative when he chooses to take the law into his own hands, an action that threatens to undermine the film’s message.

But Survival Skills is based upon a 2017 short, which itself was inspired by Armstrong’s own experience of working in domestic violence shelters. While it has plenty of comments to make on the police, then, it is not a direct product of our current cultural moment and its primary concern is with drawing attention to a far more specific issue: America’s systematic failure of women. It undoubtedly succeeds in doing that – even if some elements of its narrative feel poorly timed – and does so in a genuinely inventive way.