Now and again, people ask me for my views on the Crop Circle phenomenon. Well, I’m sure the vast majority of them are made by people, although calling the creators “hoaxers” is way off the mark. To understand my views on the phenomenon, check out this link which will take you to one of my earlier articles here at Mysterious Universe. Personally, I think that article gets to the heart of the matter – albeit in a very strange and alternative way. With that said, I’ll share with you a few of my many experiences in the weird world of the Crop Circle. Built on land that had come into the possession of the Earls of Chester as far back as the end of the 11th Century, Chartley Castle – which can be found in the county of Staffordshire, England, where I grew up – is a stone fortress founded in the thirteenth century by Ranulph Blundeville, the then Earl of Chester.  And, in the summer of 2006, a striking Crop Circle was found in a field directly next to the old castle.  When word got out about the creation, I drove out to the site, as I was in the U.K. for several months. The Crop Circle was both large and intricately designed. 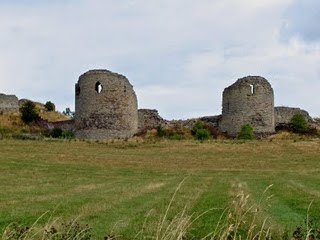 Not only that, as I clambered down a steep, grassy embankment towards the formation, and made my careful way through thick brambles, lush bushes and a barbwire fence, I could not fail to see something highly strange strewn around the fringes of the Crop Circle: namely, a not inconsiderable pile of large and spectacularly colorful peacock feathers that were laid out in the form of a five-pointed star. And what was the deal with all those peacock feathers? Rumors were circulating in the area – the little villages, for the most part – that the formation and the peacock feathers/circle amounted to what one local called “black magic.” The mystery remained exactly that: a mystery. 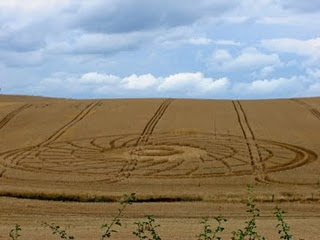 Moving on, in 1994, while I was digging through a then-newly-released government UFO file at the National Archives in Kew, U.K., I came across a fascinating Ministry of Defense document. As the file demonstrates, on March 23, 1964, T.E.T. Burbury, the Rector at Clifton Rectory, Penrith, Cumberland, wrote to the National Physical Laboratory at Teddington describing an encounter which had occurred some days previously. I quote from the rector’s letter: “Dear Sirs: Does an apparent column of blue light about 8-feet in diameter and about 15-feet high which disappears and leaves a mark of very slightly disturbed earth, the same diameter, mean anything to you? This occurred about 9.30 p.m. last Saturday night about 2 miles from here. It was seen by a person who is very short sighted who would have been unable to see anything, except the light, even if it had been present. I examined the ground which is about 100 Yards from the nearest building and there are no pylons near. There was no sign of burning, either by sight or smell, the grass growing between the exposed ground appeared quite normal. There were no signs of bird tracks or droppings: the ground simply appeared to have been lightly raked over in an almost perfect circle. “For your information only, I told the farmer to have a sample of the earth collected and analysed for bacteria content, but don’t know whether he has done so. Yours faithfully: T.E.T. Burbury.” Note the words of the rector:  “…the ground simply appeared to have been lightly raked over in an almost perfect circle.” Does this not sound somewhat familiar?

Now, there’s the matter of Crop Circles of the tiny kind. One of the things that amazes many people about Crop Circles – regardless of who or what creates them – is there size. Sometimes they are gigantic. It’s a lesser-known fact, however, that others are barely the size of a car tire. Back in the 1990s, I spent a lot of time running around England in search of Crop Circles – chiefly in the circle-saturated county of Wiltshire, but sometimes elsewhere too. One of the things that interests me is the perception that many people have of Crop Circles – namely, that they are huge, sprawling designs of intricate design. Well, yes, some of them are. But, not all of them.

While the photo above shows a huge formation – taken by me at ground-level in the summer of 1997 – with Wiltshire’s famous Silbury Hill in the background, the one below shows a very small Crop Circle, which I captured for posterity in a field in the summer of 1999. A natural event? Whatever the answer, it raises a thought-provoking question: How many similar circles of the small kind are overlooked each year, simply due to the fact that – for the most part – they are almost impossible to see, unless you happen to have reason to be in the relevant field where it “sits”? Perhaps, in a classic “not seeing the woods for the trees” scenario, the number of Crop Circles that manifest, appear or are made in England each and every year is far greater than we suspect. But, while focusing on the huge formations that certainly make for spectacular photographs and that reel in the media and the tourists, we are missing the equally intriguing, but far smaller, ones.

Maybe, one day, I’ll write a book on my days in Crop Circle land. There’s certainly enough material. All of it very weird…

Willow Review: Disney+ Sequel Series Is Worth the Wait — Fun, Accessible Fantasy at Its Most Charming
How Markarian Became Part of Naomi Biden’s Wedding Day—and a Favorite of the First Family
Indiana Jones 5’s James Mangold Is Still Shutting Down Trolls When It Comes To Major Theory About The Movie
‘Snow Monster vs. Ice Shark’ Trailer – Ridiculous Chinese Monster Movie Now Available on DVD
‘House of 1000 Corpses’ – Rob Zombie Shares Another Rare Image from the Lost Original Ending