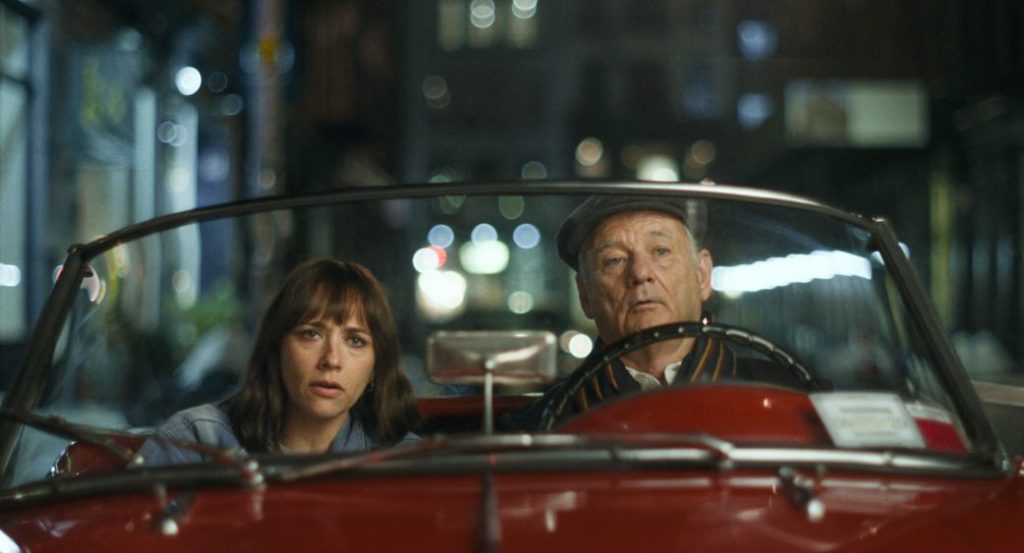 The specialty streaming space will be On the Rocks this weekend — so to speak. Sofia Coppola’s father-daughter dramedy is set to drop on Apple TV+ on Friday and it seems like light-hearted movie-watching fare from the Oscar-winning filmmaker.

Deadline’s resident critic Pete Hammond seems to sign-off on the sentiment that this will bring a little more fun than past Coppola auteur-driven pics like her previous film The Beguiled. In his review from when the pic premiered at the New York Film Festival in September, he wrote, “On the Rocks is more than just a riotously funny, wonderfully witty and smart film — it is a much-needed one.” Hammond added, “Coppola’s movie is also a bit of a pre-pandemic valentine to New York City, a reminder of the Big Apple’s pure joy, and even without Bill Murray to light it up that would probably be enough.”

On the Rocks stars Rashida Jones as  Laura, a young New York mother who is faced with some doubts about her marriage. Her larger-than-life playboy father Felix (Bill Murray) insists that they investigate him — so they do. As the two begin prowling New York at night, careening from uptown parties to downtown hotspots, their bond as father and daughter begins to grow stronger despite one detour after another. The film also stars Marlon Wayans, Jenny Slate and Jessica Henwick.

Watch the trailer below.

Iconic director Wayne Wang, who is best known for The Joy Luck Club and Chan is Missing, brings his latest feature Coming Home Again to virtual cinemas and select theaters in the U.S. and Canada.

Based on The New Yorker essay by award-winning Korean American writer Chang-rae Lee, the family drama follows a character also named Chang-rae (Justin Chon), a first-generation Korean-American who returns to his family home in San Francisco to care for his ailing mother (Jackie Chung). Wanting nothing more than to fulfill his role as the supportive son, he must come to terms with his own conflicted emotions.

Taking place over one full day, Chang-rae attempts to prepare a traditional Korean New Year’s Eve dinner — just like his mother. The care that goes into preparing this meal gives him time to reflect on the intense relationship between them. Memories become a doorway into a woman who was so much more than the mother he thought he knew. As a result, Chang-rae is faced with the dilemma of living with the permanent scars of unresolved family sacrifice, or the risk of opening new wounds as cancer shadows their lives.

Wang wanted the dinner Chang-rae cooked to be authentic and very precise. Rather than a fancy restaurant meal, the meal had to be an authentic home-style one. Wang had the set and food designed by Chef Corey Lee of San Francisco’s famed Michelin three-star restaurant Benu. During rehearsals, the chef taught the actors proper traditional cooking techniques so that they themselves could make the dinner on camera. So basically, this film will make you emotional and hungry at the same time.

On October 24 at 4pm EST, there will be a free Q&A livestream with Wayne Wang and Chang-rae Lee as well Chef Corey Lee. The conversation will be moderated by Emmy-winning filmmaker Robert Rosenberg.

Coming Home Again made its world premiere at the Toronto International Film Festival and will be released by Outsider Pictures and Strand Releasing.

Written and directed by Simien, Bad Hair debuted at Sundance and was acquired by Hulu for a pretty penny (a little over $8 million) and follows Anna Bludso (breakout star  Elle Lorraine), who had a traumatic experience during her childhood when her scalp was burned from a mild relaxer perm. Fast-forward to her adult life in 1989, and she is working at a music video TV show called Culture, which is the epitome of hip hop and New Jack Swing style. Her life is turned upside down when her dreadlocked boss is replaced by Zora (Vanessa Williams), a vicious ex-supermodel who looks to switch things up. When she warns Anna about her natural hair, she goes out and gets a weave from a bougie yet mystical hairdresser (Laverne Cox). She looks good and starts excelling at work with her new hair, but after a while, it begins to have a bloody mind of its own — literally.

The film definitely serves up Brian De Palma energy but ultimately, like all good horror movies, is grounded in relevant issues that impact modern audiences. With Bad Hair, Simien dives deep into the Black experience — specifically the experience of Black women.

Based on true events set in 1928 New Jersey, Radium Girls follows sisters Bessie (Joey King) and Jo (Abby Quinn), who spend their days dreaming about faraway places as they paint glow-in-the-dark watch dials at the American Radium Factory. When Jo loses a tooth, Bessie’s world turns upside down as they discover Jo is victim to radiation poisoning. Bessie befriends two young activists and they expose a corporate scandal. Bessie and “the Radium Girls” file a lawsuit against American Radium. This landmark case ultimately led to a lasting impact in the area of workplace health and safety as well as the study of radioactivity.

Radium Girls also stars Colby Minifie. It marks the feature directorial debut of Oscar-nominated producer Lydia Dean Pilcher and filmmaker Ginny Mohler, who wrote the script with Brittany Shaw. The film debuted at the Tribeca Film Festival in 2018 and was originally set to open in theaters in April 2020 before shifting to an October 23 release date. The film will opens in select theaters and in virtual cinemas today.

Set in New Orleans, Justin Benson and Aaron Moorhead’s Synchronic follows two best friends Steve (Anthony Mackie) and Dennis (Jamie Dornan). Both paramedics, they pair answer the call to a series of accidents that are bizarre as they are gruesome. They think it’s all because of a new party drug, but when Dennis’s oldest daughter suddenly disappears, it goes beyond that. Steve stumbles upon a terrifying truth about the supposed psychedelic that will challenge everything he knows about reality — and the flow of time itself.

The Gravitas Ventures film The Place of No Words is a different kind of fantasy. Director Mark Webber stars alongside real-life wife Teresa Palmer and their son Bodhi Palmer in this genre-bending pic that uses elements from his real life to enhance his storytelling — much like his previous films Explicit Ills, The End of Love and Flesh and Bone. It is clear that he has distinct vision when it comes to filmmaking.

In The Place of No Words, he tells a grounded family story of love, laughter, pain and death through a fantastical gaze of mythical forest creatures.  The pic, which originally premiered at the 2019 Tribeca Film Festival, opens in select theaters and on demand today.d in a series of “reality cinema” films. It’s a follow up to his 2017 film, Flesh and Blood, which is also a film that featured his real-life family members.