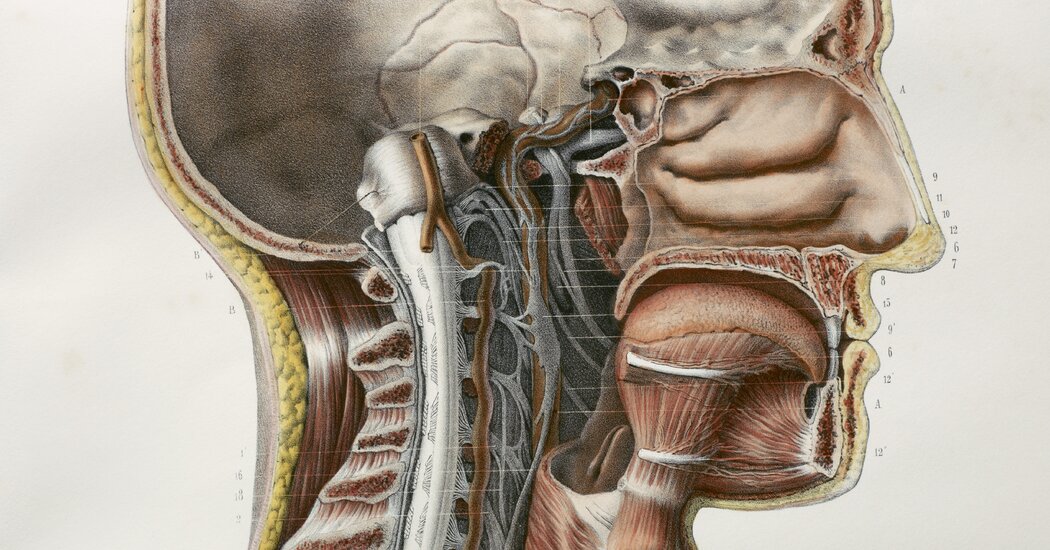 After millenniums of careful slicing and dicing, it might seem as though scientists have figured out human anatomy. A few dozen organs, a couple of hundred bones and connective tissue to tie it all together.

But despite centuries of scrutiny, the body is still capable of surprising scientists.

A team of researchers in the Netherlands has discovered what may be a set of previously unidentified organs: a pair of large salivary glands, lurking in the nook where the nasal cavity meets the throat. If the findings are confirmed, this hidden wellspring of spit could mark the first identification of its kind in about three centuries.

Any modern anatomy book will show just three major types of salivary glands: one set near the ears, another below the jaw and another under the tongue. “Now, we think there is a fourth,” said Dr. Matthijs Valstar, a surgeon and researcher at the Netherlands Cancer Institute and an author on the study, published last month in the journal Radiotherapy and Oncology.

The study was small, and examined a limited patient population, said Dr. Valerie Fitzhugh, a pathologist at Rutgers University who wasn’t involved in the research. But “it seems like they may be onto something,” she said. “If it’s real, it could change the way we look at disease in this region.”

Even without a direct therapeutic application, Dr. Yvonne Mowery, a radiation oncologist at Duke University, said she “was quite shocked that we are in 2020 and have a new structure identified in the human body.”

Dr. Valstar and his colleagues, who usually study data from people with prostate cancer, didn’t set out on a treasure hunt for unidentified spit glands. But the structures are important to researchers and doctors who deal in oncology.

Salivary glands collectively churn out about a quart of spit each day, which is responsible for “a lot of things that make you enjoy life,” Dr. Valstar said. It lubricates the mouth, making it easier to speak and swallow. It ferries the tasty chemicals in food to the microscopic cells that can sense them. It even comes imbued with crude healing powers, waging war against germs and speeding the closure of wounds.

Doctors take numerous precautions to avoid damaging the glands when administering radiation therapy, which can, with a single misdirected zap, permanently compromise the delicate tissues.

While perusing a set of scans from a machine that could visualize tissues in high detail, the researchers noticed two unfamiliar structures dead center in the head: a duo of flat, spindly glands, a couple of inches in length, draped discreetly over the tubes that connect the ears to the throat.

Puzzled by the images, they dissected tissue from two cadavers and found that the glands bore similarities to known salivary glands that sit below the tongue. The new glands were also hooked up to large draining ducts — a hint that they were funneling fluid from one place to another.

It’s not completely clear how the glands eluded anatomists. But “the location is not very accessible, and you need very sensitive imaging to detect it,” said Dr. Wouter Vogel, a radiation oncologist at the Netherlands Cancer Institute and an author on the study. The body’s other large salivary glands, which sit closer to the surface of the skin, can also be poked and prodded; that’s far less feasible with this fourth pair of structures, which are tucked under the base of the skull.

The new find, Dr. Vogel said, might help explain why people who undergo radiation therapy for cancer of the head or neck so often end up with chronic dry mouth and swallowing problems. Because these obscure glands weren’t known to doctors, “nobody ever tried to spare them” from such treatments, Dr. Vogel said.

Dr. Alvand Hassankhani, a radiologist at the University of Pennsylvania, said he was hesitant to label the structures “new organs.” In addition to the three pairs of known large salivary glands, some 1,000 minor salivary glands are sprinkled across the lining of the mouth and throat. They are more petite and tougher to find through imaging or scanning than their heftier cousins. It’s possible that the Dutch researchers just happened upon a better way to image a set of underappreciated minor glands, Dr. Hassankhani said.

Dr. Fitzhugh and Dr. Mowery were slightly more persuaded, but both called for more data. “To have it one clinical data set is never enough,” Dr. Mowery said.

The patient population in the study also wasn’t very diverse, Dr. Fitzhugh said. The original group examined by the researchers was made up entirely of people with prostate or urethral gland cancer, and included only one woman among 100 subjects.

The imaging techniques used in the study were also specifically tailored to hunt for tumorous growths in this patient population. It may be worth widening these experiments to include a new group of people, using different methods, she said.

Dr. Fitzhugh added that it should be easier to spot the camera-shy glands with traditional techniques “now that they know to look for it.”

Thomas Rhett Rediscovers His Country Self on the Rootsy New Album ‘Country Again’
Eurovision 2021: How will the song contest work this year?
Paramount+ Premiere Planned for the New ‘Paranormal Activity’ Movie Before the End of 2021
Florida’s Mile 0 Fest: On the Ground at One of the First Music Festivals Back
Official “Stranger Things” YouTube Account Teases Something for Tomorrow Morning… [Video]