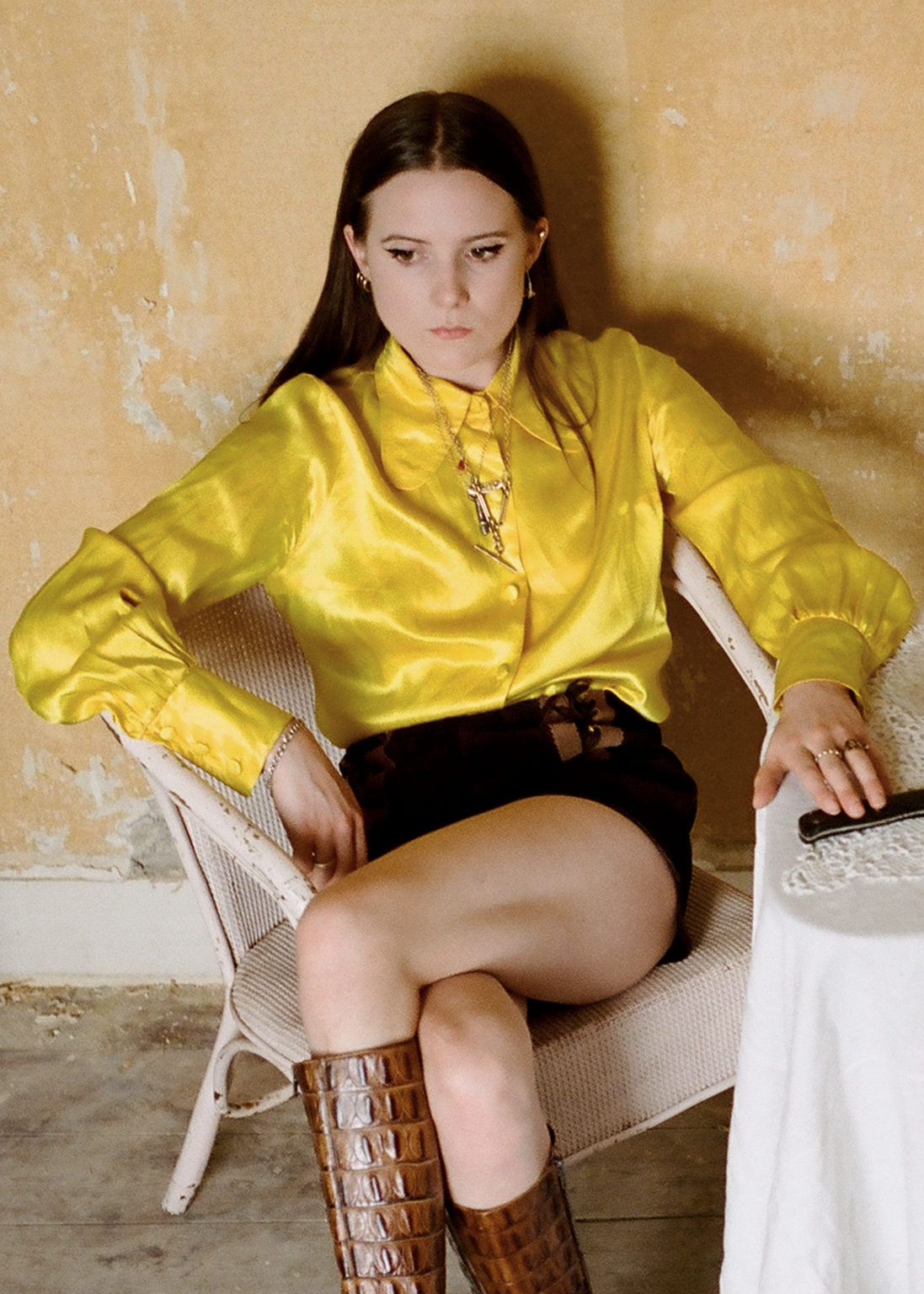 Martha Skye Murphy was just 9 years old when she first collaborated with Nick Cave and Warren Ellis, recording vocals for the soundtrack to John Hillcoat’s 2005 Western The Proposition. In 2013, she contributed backing vocals to Nick Cave and the Bad Seeds’ spacious and contemplative Push the Sky Away and accompanied them on their subsequent tour. These early experiences had a profound influence on Murphy, who grew up in an artistic environment in South East London before going on to study History of Art at Cambridge University. Like Cave, the singer-songwriter and actor has a penchant for combining a dark sense of theatricality with pure emotional expression, two creative modes that are often seen as mutually exclusive. Inspired by classical literature, and specifically Ovid’s Heroides, her 2018 debut EP of the same name showcased her ethereal vocals as they coiled around dramatic piano and string arrangements, while her first EP of 2020, Heal, is more minimal and abstract, invoking the haunting soundscapes of a Grouper album. She casts these hypnotic qualities in a new light on her forthcoming EP, Yours Truly, whose strikingly potent title track brims with slow-burning intensity before culminating in a hair-raising crescendo. Just yesterday, she shared another preview from the EP, ‘Self Tape’, an intimate piano ballad that simmers without reaching any obvious conclusion, instead dissolving into thin air. Martha Skye Murphy’s music has a way of pulling you into its an immersive world, but you never really know where it might leave you – and that’s exactly what renders it so mesmerizing.

We caught up with Martha Skye Murphy for this edition of our Artist Spotlight series, where we showcase up-and-coming artists and give them a chance to talk about their music.

I love the visceral intensity of your single ‘Yours Truly’, especially as the song reaches its climax. How did you go about constructing the track, and what were some of the inspirations behind it?

Thank you! Originally the structure I wrote was based around a tender haunting which developed into an unexpected exorcism. But then when Andrew (Sarlo) and I were recording Yours Truly in the studio, we accidentally started making this outro from all the prospective backing vocals which were like the ghosts of the song. That ending completes the whole world of Yours Truly for me. Nothing really ends in silence or as simply as I had planned the song to. The tsunami starts by whispering to the water, then heaving up this climactic wave, pausing grandly before rushing in, but the storm that follows lingers quietly and for much longer than its aggressor. That’s how I see Yours Truly. There’s ghosts and shadows throughout but for me the most frightening and affecting are the slowest moving; you don’t even realise they’re there.

About your new EP, you’ve said that you found yourself resorting to the voice of a child as a way to “confront the topic of ‘dishonesty’.” What do you feel you took away from channelling that voice, and how do you think it might influence your songwriting process going into the future?

Children have a conflicting relationship to deception and truth. They can be excellent liars yet also have a profound skill in telling you how it is! On the one hand I was interested in how childish behaviour manifests and on the other, in how by adopting the voice of an innocent I was able to explore a method of expression that exemplified the human’s capacity to feel such an extreme range of contradictory emotions. When people play at being adults it’s interesting to spot when they’re suppressing, modifying or hiding behind a veneer of ‘self’; one that is projected and dishonest. This partly comes from an enforced societal expectation for people to ‘grow up’. So without parenting, disciplining or taming myself within the songs, writing instantaneously and not labouring over them too much, the unpredictable structures and sometimes incomplete and abstract narratives came to life.

Through the voice of a child, I was able to further investigate how to entertain and play with an audience’s perception of listening to the ‘truth’.

You were quite young when you first worked with Nick Cave and Warren Ellis. What are your memories of that initial collaboration?

Naivety and excitement! I didn’t really know what was going on, I just liked performing and singing to people and this was the by-product of that. When we recorded the title track, the hymn Happy Land, in one or two takes, I remember thinking even as a 9 year old, ‘I hope that I’ve sung that the best I could have’, and being worried I might have struggled to hit some notes and that that might matter because this was for a film, not my normal audience of parents and sister. Now, when I listen back, it is that struggling naive voice that makes it such a beautiful performance and piece of music; all the more disturbing and fitting for the content of The Proposition’s opening credits.

What’s something you learned from touring with them years later for Push the Sky Away?

That there can be 30 musicians on stage and 3000 people in the crowd but if you’re a truly good story teller, you can make the audience believe there’s only 2: them and you.

In addition to being a musician, you’re also an actor. What role does that kind of multidisciplinarity play in your work?

It means that the music is both a parasite and a feeder, it’s a database and also a portal to access other mediums of expression and interests for me. The multidisciplinary approach is just part of my nature, I look for meaning, inspiration and art in everything around me whether it’s real or imagined. I’d like to challenge the multi-disciplinary aspects of the work much further.

What are some things you’re looking forward to in the not-so-distant future?

That’s for me to know and you to find out (sooner or later)!

Martha Skye Murphy’s Yours Truly EP is out November 13.