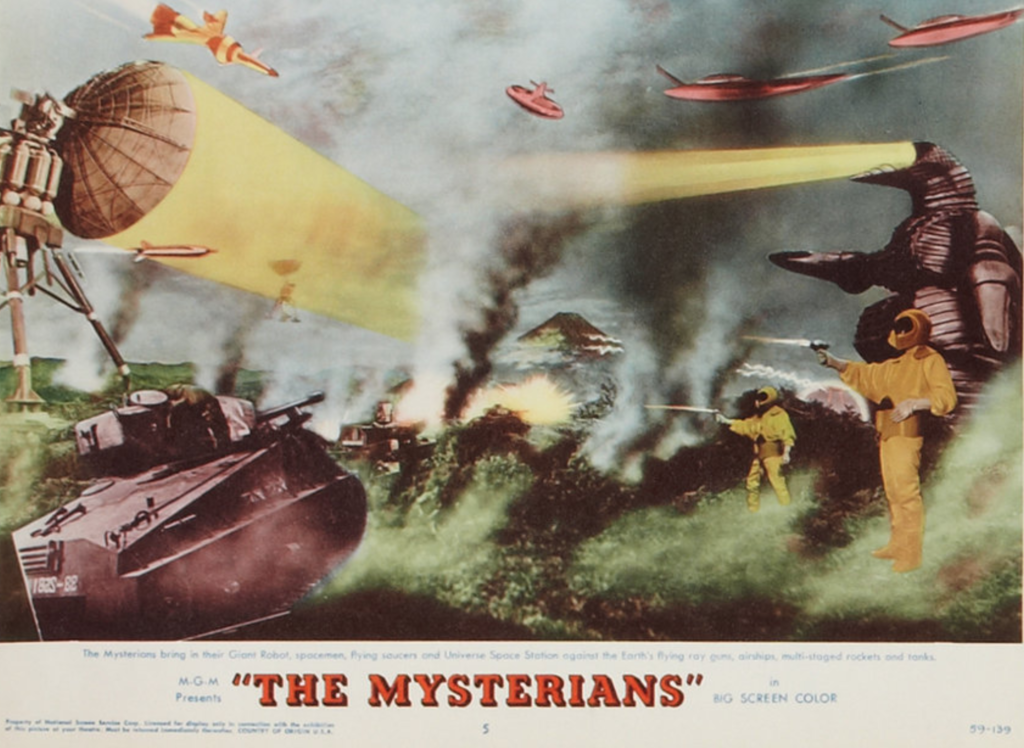 Toho’s The Mysterians (1957) is a mammoth sci-fi spectacle, featuring giant lasers, flying saucers, underground domes, alien invaders, and robot monsters. Lying beneath its visual prowess is a set of questions, themes, and ideas that elevate The Mysterians as one of the decade’s most fascinating films. It asserts a warning for humanity: don’t misuse science. For 1957, in the midst of a spiralling nuclear arms race between the United States and the Soviet Union, the film is chilling; but when examined through the lens of 2020, The Mysterians is arguably even more frightening today.

In the film, a series of earthquakes and forest fires precedes the appearance of a giant robot, Mogera. The mechanical monster wreaks havoc before it is blown up by the self-defence forces. The next day, a gigantic dome emerges from the ground, and we are introduced to the robot’s creators: the Mysterians. They beckon key scientists to meet them in their base, where they explain themselves as a race ravaged by atomic war. The Mysterians want three kilometres of land on which to live, but they also have an unpleasant stipulation. The Mysterians’ bodies are so damaged by radiation that they can no longer birth healthy offspring; and so, they want to mate with human women. Having already used Mogera to show that conflict is useless, the Mysterians appear to have the upper hand. However, forces from East and West unite, and Earth is poised to take on the Mysterian menace.

The Mysterians features Akihiko Hirata in a role similar to his turn in Godzilla (1954). Hirata plays the enigmatic Shiraishi, a scientist who discovered the home planet of the Mysterians, Mysteroid. Shiraishi disappears before the Mysterians emerge, and we later discover that he has joined them. Seduced by their scientific achievements, Shiraishi admires the Mysterians; he believes that they simply wish to stop mankind from destroying itself, ignorant to their real plans for conquest. His assertion of science above all else prevents him from considering the ethical horrors that come with the Mysterians’ terms.

Shiraishi is the personification of director Honda’s concerns over the misuse of science. “At that time I feared the danger of science, that whoever controlled it could take over the entire Earth”, Honda observed.

Shiraishi divorces science from political employment, placing it above the human-Mysterian conflict. He removes himself from any guilt or anguish over the Mysterian plans because, to him, how science is used does not matter, just as long as it prevails. Indeed, Shiraishi questions whether Man or Mysterian will rule the Earth, but concludes that “only science can rule”, effectively dispensing with notions of right or wrong. His assertion equates humanity with the Mysterians, as if the existential threat mankind faces is unimportant. He has turned science into a dogma, espousing a kind of allegiance to it that contradicts the neutrality he implies.

What good is science if its advancements are oiled with blood?

In the same year that The Mysterians was released, the Soviet Union accomplished two things. Firstly, the initial tests of their first Inter-Continental Ballistic Missile (ICBM), the R-7 Semyorka, took place in May 1957. By 1962, ICBMs were in full operation by the Soviets, with no more than ten nuclear-tipped missiles active at any given time. But, also in 1957, a modified form of the R-7 ICBM was used to launch Sputnik-1, the first artificial satellite, into orbit. The final shot of The Mysterians sees a similar-looking satellite floating above the Earth, while the Mysterian mothership sinks away in the background. There’s a suggestion of protection, that we’ve now got our eye on the stars to guard against future attack. Science can bring wonders just as much as it can bring horrors. To believe as Shiraishi does, that science is a neutral party above politics, is a fallacy; ignoring historical precedent and instances where scientific achievement has gone hand-in-hand with atrocity.

Science has no politics in itself, but its use and employment are inherently political. Shiraishi’s flaw is in separating the Mysterians’ scientific achievements from their mortal cost. It is his self-assured praise of science as a neutral agent that is, in fact, an act of grave inhumanity.

There’s also something else that makes The Mysterians all the more chilling today. The film’s concern that we could become like the Mysterians may have already come to pass – though not in a way that’s immediately apparent. The Mysterians have gone through an unimaginable horror in the form of atomic annihilation; and yet, they haven’t learned from their own nightmare. Instead of renouncing war or seeking peace, the Mysterians have looked to further conquest. For them, there is no recognition of the horror of war, just the restart of its engine.

At the film’s climax, when the Earth has successfully fought back the invaders, we see scattered Mysterian bodies in their decimated dome. Many of their helmets are cracked and split, revealing their faces; they look human, with very little to distinguish them from us except their wounds and radiation scars. One looks at their damaged faces and sees a miserable, endless cycle. How many more worlds were attacked by the Mysterians before they found us? And, as their saucers retreat at the film’s end, how many more worlds are waiting for them?

Mankind’s own history is littered with atrocities. We have relentlessly pursued war for gain, often enacted by the same nations and governments. Like the Mysterians, we recognise the horror of conflict, but this doesn’t cease the bloodlust of the more imperialist states. In the United Kingdom, we commemorate the war dead each year by wearing the remembrance poppy for the 11th November. However, the symbol has become a lightning rod for reactionary malice; accusations that a person is not patriotic enough belie a resurgent jingoism. In 2010, several veterans asserted that the annual poppy appeal (run by the Royal British Legion) was being used to drum up support for the military in general, rather than to recognise lives lost. And, as recent as 2015, politicians whose politics are not overtly pro-military have faced extreme scrutiny over the sincerity of their reverence. Presently, in November 2020, current British Prime Minister Boris Johnson announced a massive £16.5 billion spending increase to the military, mere weeks after the supposed commemoration of the war dead. After the several wars we’ve fought in (and those in which we’ve committed human rights abuses), we’ve not learned to renounce war or pursue peace. Even our symbols of introspection are used for anything but.

The last stanza of Siegfried Sassoon’s Suicide in the Trenches resonates with an increasingly sharp edge today:

“You smug-faced crowds with kindling eye

Who cheer when soldier lads march by,

The hell where youth and laughter go.”

One looks at that scarred Mysterian face and sees a reflection. Today, what is so frightening about The Mysterians is not simply that we could blow ourselves up in nuclear fire, but that we, like them, have ignored our past and pursued further conquest. Watching The Mysterians today is scary because perhaps it’s too late – maybe we already are the Mysterians. Whichever path politicians and capitalist interests choose, one hopes it is not a fulfilment of the Mysterians’ whole, self-destructive backstory.

But maybe there is hope.

The Mysterians is also striking in its depiction of a united Earth, with both Russia and America working side by side. The nations of the world join to fend off the new danger, with earthbound conflicts rendered banal in the face of collective oblivion. This point isn’t laboured over in the script, but it is nonetheless significant. It is especially important given that 1957 also saw Nobosuke Kishi become Japanese Prime Minister. Kishi, a convicted war criminal, had been rehabilitated into Japanese political life by the American occupation during the so-called ‘reverse course’ which began in 1947 (a series of political and public changes which sought to cement Japan as a U.S. ally by shoring up conservative aims). Kishi would go on to consolidate Japan’s conservative forces into the Liberal Democratic Party, and was America’s choice as a steady hand to guide the country away from communism. Even without such a backdrop, the film’s depiction of straightforward co-operation between East and West, with no hints of political anxiety, is remarkable. Of course, with screenwriter Takeshi Kimura’s initial membership of the Japanese Communist Party (before it was made illegal under the 1925 Peace Preservation Law), this may come as no surprise, but it was certainly significant enough to draw the ire of some American viewers who claimed that the film was communist propaganda.

Director Ishiro Honda’s concern was in presenting a united planet – a recurring tenet of his genre work. Of The Mysterians, Honda said, “I would like to wipe away the [Cold War-era] notion of East versus West and convey a simple, universal aspiration for peace, the coming together of all humankind as one to create a peaceful society.” As noted by his biographers (Steve Ryfle and Ed Godziszewski), the visual composition of scenes involving international meetings shows a symmetry that affirms Honda’s egalitarian view; no one country is seen above or below another. Despite the doom and gloom of the readings above, referring back to Honda’s stated feelings gives hope that his vision (as it exists in the film) might still come to real-life fruition.

The Mysterians gives us a choice of who we can be. As time goes on, it seems as though we resemble the film’s villains more than its heroes. Is a united Earth possible? Hopefully. Whoever we end up resembling – be it Man or Mysterian – we must pursue positive change, but only time and our actions will tell.