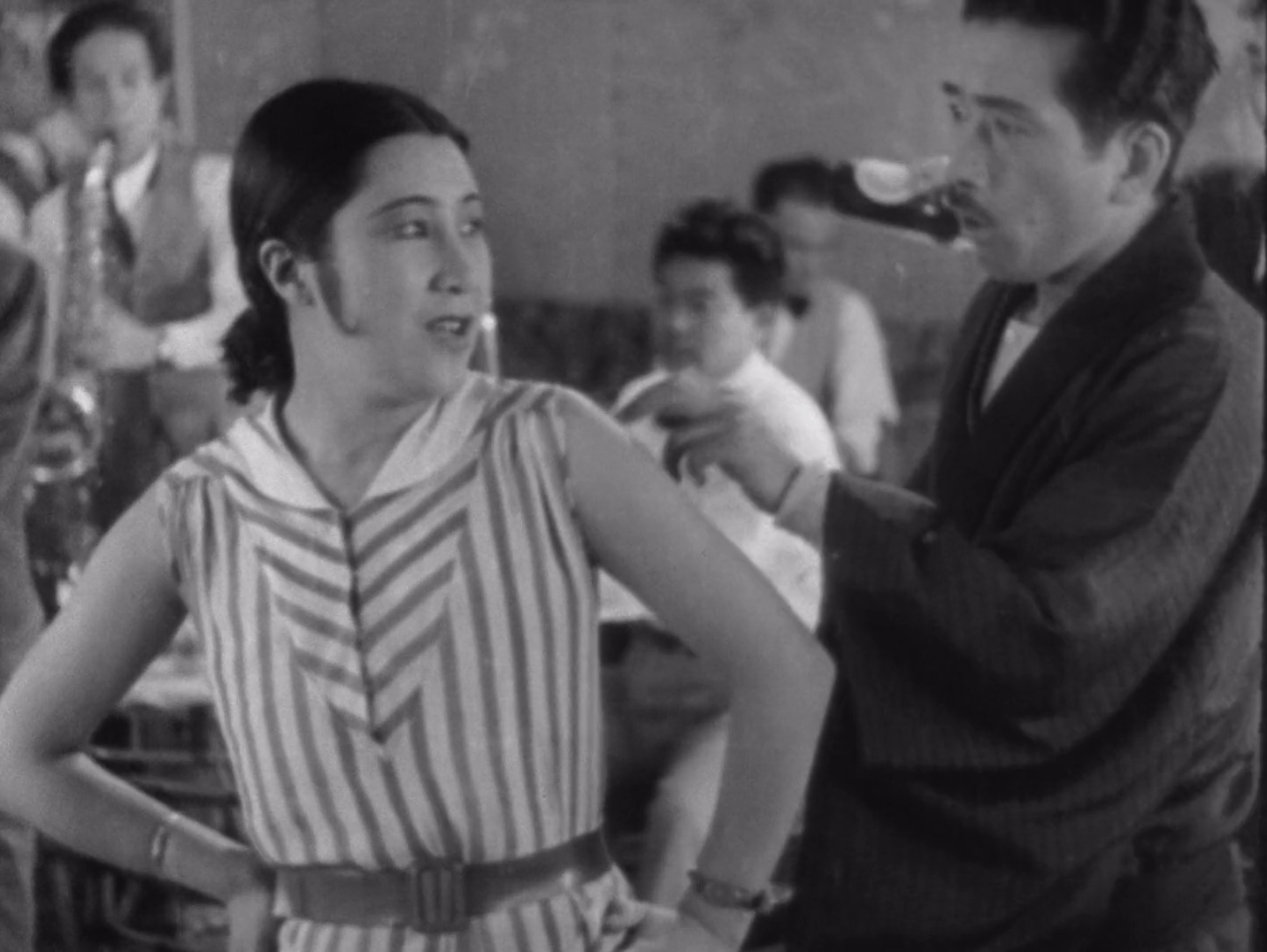 While overseas on a business trip in the late 1920s, Japanese film producer Shiro Kido attended a screening of the Alan Crosland musical, The Jazz Singer (1927), one of the milestones in early sound cinema. Dazzled by its limited use of recorded lyrics and dialogue—and recognizing that full-on ‘talkies’ were just around the corner in Hollywood—Kido consulted engineer brothers Takeo and Haruo Dobashi [1] after returning to Japan, discussing plans to develop an original brand of sound-on-film equipment (as he couldn’t afford the Vitaphone disc system used in The Jazz Singer). Meantime, his employer, the film company Shochiku, opened a sound research laboratory [2] and began distributing more of its films with pre-recorded musical tracks. Despite reservations from directors such as Yasujiro Ozu, who viewed audio tracks as needless interruption in the development of cinematic storytelling, [3] it was clear that sound would soon impact and take over the Japanese film industry.

Filmmakers in Japan had been experimenting with sound since the early 1900s; however, a combination of unsophisticated equipment and less-than-ideal shooting locales (many studios at the time were situated near industrial complexes) meant audio tracks often became infested with poor playback and distracting background noise. [4] Theaters experienced difficulty keeping sound synchronized with images and were furthermore reluctant to invest in upgrading their facilities. (Whereas silent movies could be cranked through the projector by hand, full-on talkies required motor-driven equipment in order to maintain a consistent projection rate of twenty-four frames per second.) [5] Film companies also feared retaliation from unionized orchestras and benshi (live narrator-commentators who, for silent movie audiences, acted out dialogue and explained stories) when they realized they were no longer needed.

Despite these setbacks, Shochiku’s team purged ahead and in 1931 came through with the Dobashi recording system, which was showcased in one of that year’s biggest hits, The Neighbor’s Wife and Mine. Directed by veteran craftsman Heinosuke Gosho, it told the story of a playwright constantly distracted from finishing his latest script, namely by a jazz band rehearsing next door. In addition to scoring enormous profits, the picture topped Kinema Junpo magazine’s annual “Best Ten” list (an award described by film historians Joseph L. Anderson and Donald Richie as “relatively untouched by commercial considerations [and] highly respected”). [6] It was also something of a watershed achievement for director Gosho, fiscally reviving his career after a series of consecutive flops. [7] And while sound cinema wouldn’t completely proliferate for another few years, the success of The Neighbor’s Wife and Mine proved that Japanese moviemakers could produce talkies for mainstream distribution.

Besides its historical significance, The Neighbor’s Wife and Mine is noteworthy for how it uses sound not indulgently but cleverly: to establish mood, to accentuate comedy, to propel the narrative—rather than simply record endless gabbing as was the case with other early talkies. After a rousing musical track underscoring the opening credits, we fade into a wide shot of the Japanese countryside: a traveling musician strolls along a dirt path, banging on his drums; the camera slowly pans left, dissolving into a second moving shot as we come upon an artist painting one of the country homes; the musician’s drumming fades only when the artist stands up and delivers the first line of dialogue. (“Looks good. I think I’ll make the Imperial Exhibition again this year.”)

No sooner has he finished speaking when a new sound emerges: whistling, as the film’s hero, playwright Shinsaku Shibano (played by Atsushi Watanabe, later a regular in the films of Akira Kurosawa), enters the frame. [8] The two men end up hurling insults at one another (“Hack writer.” “Amateur painter.”) before running into a field, where they are scared off by a barking dog. The playwright accidentally flees into the women’s side of the public bathhouse; and at this point, director Gosho smartly keeps his camera outside the building, using audio to accentuate comic payoff, when a woman inside screams. In these first eight minutes alone, the filmmakers have used multiple forms of sound—music (diegetic and not), vocalisms (human and animal)—in rapid succession, showing off Shochiku’s recording technology while also enhancing the sequence.

The main drama—and the point where the film’s use of sound advances to the more impressive function of influencing the narrative—begins when Shibano sits down to work on his next play (titled The Pig and the Pearl). Mice in the ceiling start to distract him; to scare them off, he imitates a cat’s meowing, comically assuming a feline posture as he does; then, an actual alley cat starts groaning outside; immediately after this distraction’s taken care of, the couple’s newborn begins to cry. (“Why did you have to have a baby?” Shibano yells at his wife. To which she counters: “You’re responsible, too!”) Their slightly older daughter then asks to be taken to the bathroom. By the time the night’s over, Shibano has torn out six unfinished pages.

The following afternoon, the neighboring jazz band starts rehearsing, prompting the playwright to march next door to request silence. Standing in the foyer, he discovers his neighbor’s wife is, in fact, the same woman he intruded on at the bathhouse the other day. (What’s more, she’s the jazz band’s singer.) Shibano’s attempts to quiet down the rehearsals come up short, and he ends up being treated to a session of uplifting songs; which, to his delight, provide him with the inspiration he needs to finish his play.

In addition to using diegetic music as a narrative device, this last sequence triumphs cinematically. Heinosuke Gosho had already directed thirty-eight features before The Neighbor’s Wife and Mine and was known around the lot as a director who “uses three shots where others use one.” Like his colleague Yasujiro Ozu, he was a tremendous admirer of Western cinema—his heroes included Ernst Lubitsch and Charles Chaplin—and tended to favor Western concepts of montage over the early Japanese aesthetic of shooting entire scenes in unmoving wide shots. And so, even with the advent of sound, he stuck to his instincts, directing this picture with strong emphasis on the visuals. The song-and-dance scenes in The Neighbor’s Wife and Mine are filmed with multiple cameras running simultaneously, allowing Gosho to record music live and edit shots together without awkward breaks in continuity. [9] In what must’ve complicated production (but also adds to the immersive quality of these sequences), cameras move about the set, tracking in on the neighbor’s wife as she sings, following her from one side of the room to the other.

In a vein ostensibly similar to other Japanese films of the post-World War I era, the story features a clash between traditionalism and modernity—embodied in this case by the two female leads. Playing the eponymous neighbor’s wife was actress Satoko Date, best known for her roles as modan garu (postwar slang for Japanese women with Western habits). Date had played many such roles for Yasujiro Ozu, the most comic being 1932’s Where Now Are the Dreams of Youth?, wherein she donned ostentatious Western clothing, smoked at a matchmaking session, and proclaimed delinquency an “exciting” trait in a husband. Embodying westernization in a cartoonish fashion, her character was promptly humiliated for the audience’s delight. In another Ozu feature, The Lady and the Beard (1931), Date was a petty crook (still clad in Western clothes) on a mission to set up—and later seduce—the film’s noble hero. In the end, she lost the man of her dreams to a kimono-clad—read: traditional—Japanese girl.

The character Satoko Date plays in The Neighbor’s Wife and Mine on the surface shares many traits with the roles described above. She wears a sleeveless dress, has her hair cut short, smokes and drinks, and when breaking into song enunciates such lyrics as: “I’m the kind of girl who’s very capricious.” However, this modan garu is presented in a significantly more positive light. Plainly devoted to her husband, she never comes onto Shibano, and her free-spiritedness proves inspirational to the playwright. He, in turn, stands up for her when negative attitudes toward modan garu manifest in the form of his own (very traditional) wife. Played by starlet Kinuyo Tanaka, Shibano’s wife is the mirror opposite of Date: dressed in kimono, her hair pinned up in a marumage (traditional hairstyle for married Japanese women). And after seeing her husband sitting next to the modan garu through their neighbor’s window, Tanaka assumes the worst, singing a song of her own: about a bride in kimono (like her) who is crying (again, like her, as she suspects her husband of adultery). Although the two women never meet, Tanaka is quick to put down Date, describing her as “that modern girl. […] I know the kind. […] A hundred percent erotic.”

The Neighbor’s Wife and Mine uses this element of social perception to segue into further experimentation with sound. The playwright brushes off his wife’s concerns about the “erotic” woman next door. From off-screen comes the latest source of distraction: the rattling of a sewing machine, as Shibano’s wife angrily runs the machine with no thread in it. Despite her insecurity, he manages to finish his play, and the film ends with the couple strolling about the neighborhood, during which they hear the engine of a passing airplane and their jazz-loving neighbors playing My Blue Heaven. The wife, no longer jealous of the “madame” next door, chants along with her husband to the tune.

Despite its critical and commercial success, The Neighbor’s Wife and Mine failed to propel sound film into mainstream status in Japan. The country produced an approximate four hundred features in 1932; of that number, a mere forty-five were talkies. [10] And May of that year validated the fears that studio executives had of the live performers who traditionally accompanied silent films: after Nikkatsu produced a few talkies in 1932, its benshi and orchestra unions went on strike, using their political muscle to temporarily shut down the company’s studios. [11] Silent movies remained a while longer, but The Neighbor’s Wife and Mine had nonetheless demonstrated that Japan could use synchronized audio to both technological and artistic success. And Heinosuke Gosho’s picture remains an impressive piece of work, nine decades after its release. At less than an hour in length, The Neighbor’s Wife and Mine tells its story efficiently, its entertainment value built upon comic situations enhanced and propelled by clever use of sound and visuals together—and just enough social clash to service both.

Kip Moore Celebrates the Drug That Is Love in New Song ‘How High’
‘Godzilla Vs. Kong’ Jumps Up To March In HBO Max & Theatrical Debut
Bailey in ‘Sisterhood of the Traveling Pants’ ‘Memba Her?!
Out Today: ‘The Helm of Sorrow’, Companion EP to Emma Ruth Rundle & Thou’s Brutal Collaboration [Listen]
Watch Morgan Wallen’s ‘Dangerous’ Album Release Show at the Ryman