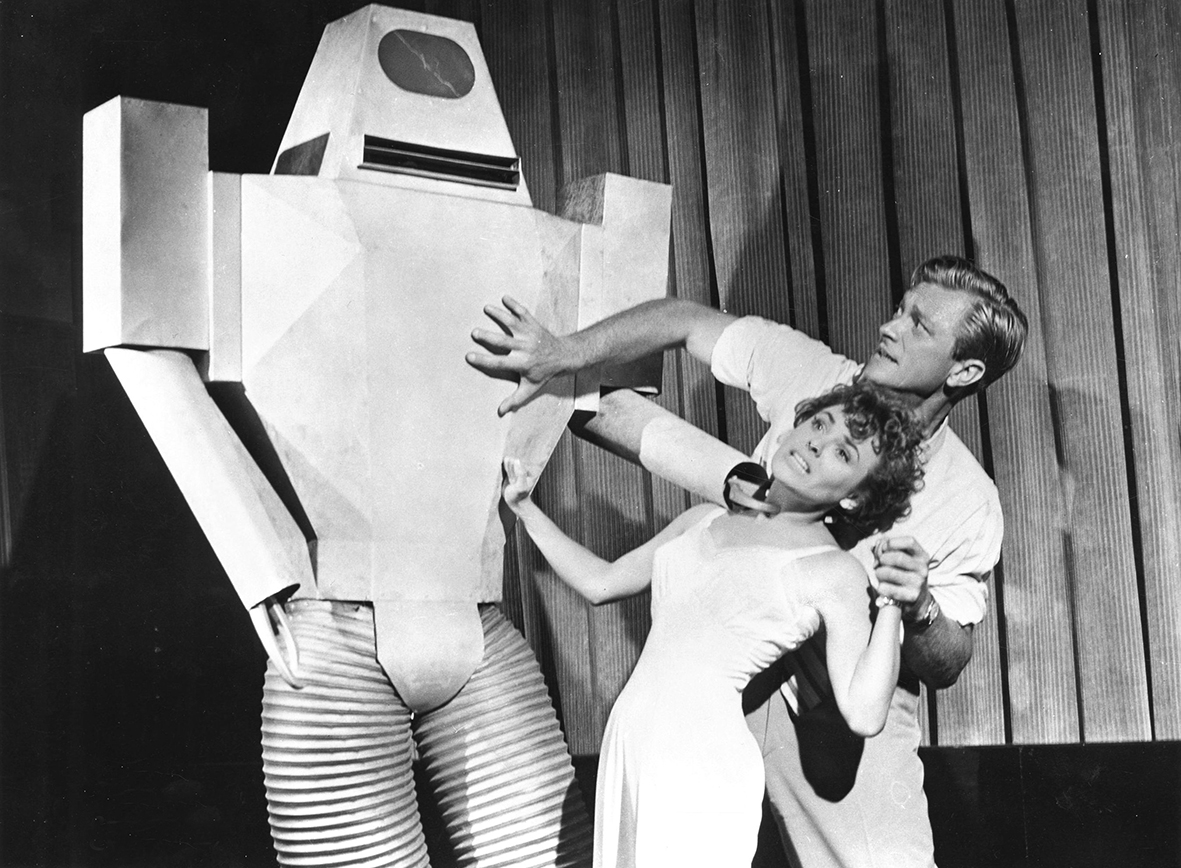 Herman Cohen’s Target Earth is an underrated ‘50s invader film. While far from the heights of Earth vs. The Flying Saucers or Invasion of the Body Snatchers (both 1956), Target Earth nonetheless deserves a renewed consideration. Its character studies are striking; and the ideas it plays with are often poignant.

Nora King (Kathleen Crowley) wakes up to an empty Chicago. Wandering the streets, she finds herself alone until Frank Brooks (Richard Denning) bumps into her. The pair join together and find Jim Wilson (Richard Reeves) and Vicki Harris (Virginia Grey), who are just as confused as they are. The group realises they’ve all been left behind after an apparent mass evacuation of the city. As they come across dead bodies in the streets, the culprits reveal themselves: gigantic, cycloptic robots. Is this an invasion? Is it already too late for humanity? The questions mount as the group struggles for survival…

Producer Herman Cohen, who would go on to produce I Was a Teenage Werewolf and I Was a Teenage Frankenstein (both 1957) for American International Pictures, estimated that Target Earth cost just $85,000. Indeed, the film’s low budget somewhat hinders its depiction of the apocalyptic premise. For example, all-too-obvious stock footage is used to represent a bomber attack on the invading robots. However, Target Earth is not really about the spectacle of invasion (as much as its marvellous poster may say otherwise) and is more concerned with character.

The film opens with an extended shot of Nora’s bedroom. We pass over her ticking clock and her reflection in the mirror, before reaching a bottle of sleeping pills just beyond her reach. She wakes, and the camera lingers over her eyes as they flicker about in confusion. This marvellous opening sets up a firm foundation on which mature ideas are explored. Once Nora and Frank have warmed to one another, she reveals that she slept through the evacuation because of a failed suicide attempt. She speaks of how she thought she had no reason to live; and how that’s changed in light of their new reality.

Placing her character before the backdrop of world-ending calamity allows for a fascinating look at what it means to live. In a world in which the flow of society – of cultural norms – has come to a stop, our reasons to live may be thrown into question; but in the same way, also derailed are the reasons not to live.

While this may seem bleak, the film balances it with an optimism from Jim and Vicki. While the couple bicker and nip at each other, the rising tension prompts not breakdown, but love. The pair come together and put aside petty squabbles. As sentimental as it is, their love is a glimmer of hope in a situation that seems without it; a genuine surprise after the hopelessness of later apocalypse films like The Last Man on Earth (1964), or novels like Cormac McCarthy’s The Road (2006).

To its detriment, the film eventually resolves its robot invasion with certainty; which perhaps lessens the significance of character developments stirred by hardship. Indeed, a more ambiguous ending – ala Terence Fisher’s The Earth Dies Screaming (1964) – may have benefitted the narrative.

Finally, a review for Target Earth would be incomplete without mention of its gigantic robots. While they may appear clunky, their glowing eyes and sheer height give them an imposing power. In an interview with Tom Weaver, Herman Cohen explained that they only had one robot suit for the production; and that it was built in his garage. Moreover, Cohen stated that scenes depicting a deserted Chicago were shot during early mornings in L.A. over four or five weekends – often without location permits. In an amusing anecdote, Cohen explained how shooting in front of a church gave the crew an issue when, “all of a sudden the church doors swung open and the people came piling out [laughs]! ‘Oh God! Stop the cameras!’ We forgot they were all in there.” This conjures up a fantastic image of churchgoers suddenly confronted by a giant robot on an early Sunday morning!

Unholy robots aside, Target Earth deserves a renewed interest and evaluation. Its characters communicate fascinating ideas about humanity in times of crisis. And while the budget may have hindered its scope, the narrative is still one of poignancy. With a healthy dose of robots for sci-fi wonder, Target Earth is a worthwhile watch.