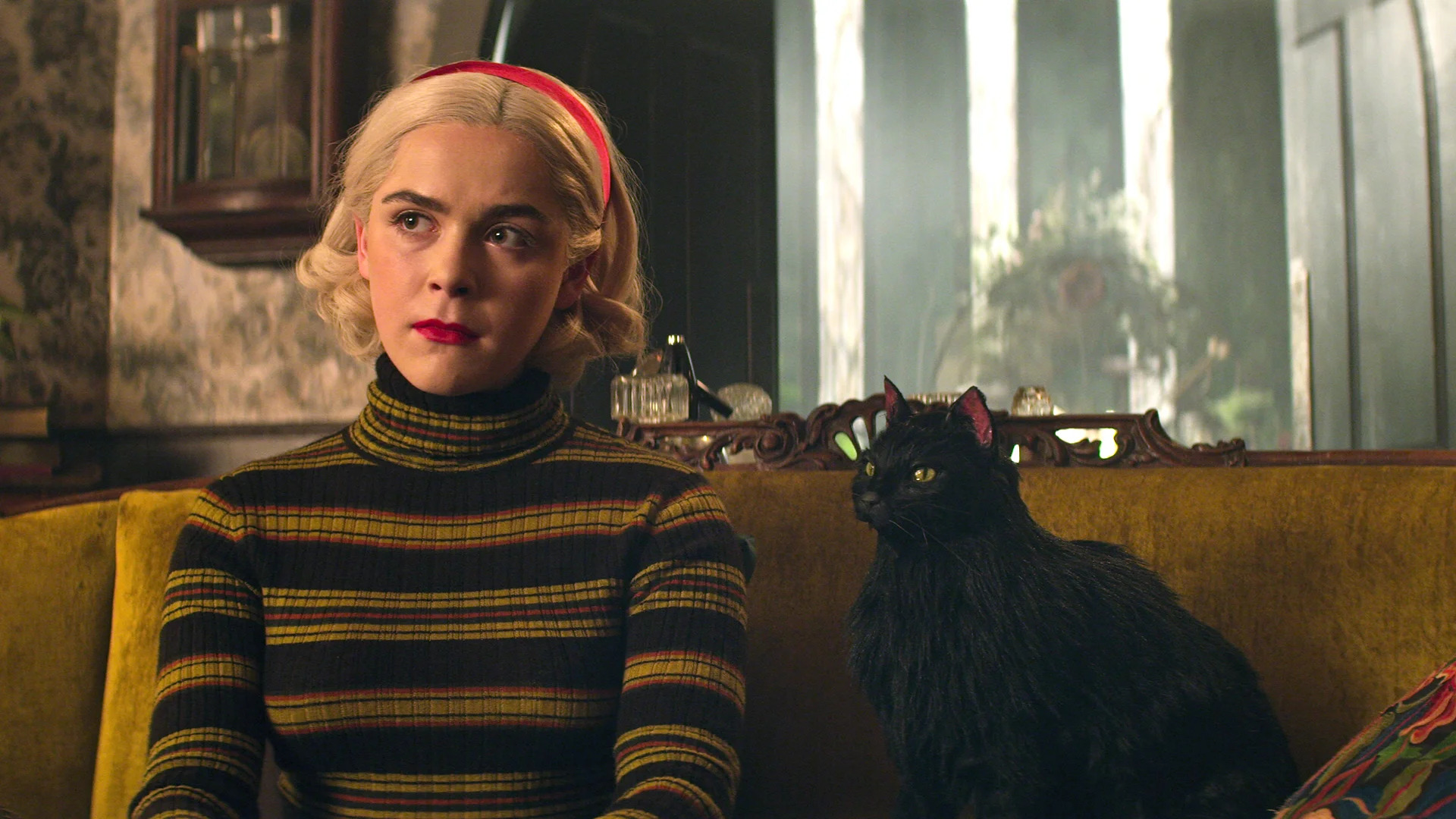 Netflix’s Chilling Adventures of Sabrina has recently come to an end after four successful seasons on the streaming platform. The somewhat abrupt conclusion does a hasty and haphazard job of wrapping up its storylines in a very un-Sabrina-like fashion. The fun, rompy series is known for its deliberate pacing and well thought out plots, but the final episodes feel like an abandonment of whatever original plan its creators had.

Created by Roberto Aguirre-Sacasa (Riverdale, Katy Keene) and based on the Archie Comic of the same name, Sabrina begins when Sabrina Spellman is faced with a big decision: on her sixteenth birthday, she must forsake her ties to the mortal world and follow the Path of Night to become a witch. Whilst this path is not as dark as it sounds, she will have to worship Satan and give up her sweet mortal boyfriend, Harvey Kinkle.

Sabrina does indeed become a witch, but she decides to keep her ties to the mortal world. She divides her time between cheerleader duties at Baxter High and running for Top Boy at the Academy of Unseen Arts. As the show progresses, the stakes increase, and Sabrina feels torn more between her two worlds. She must shoulder more responsibility in the celestial world, but she also knows that her powers can help save her mortal friends. Naturally, Sabrina decides to split herself in two and inhabit both worlds.

This causes a world of problems and plenty of opportunities to show off how capable she is to her two aunts, Hilda and Zelda, who aren’t quite so approving of her second self becoming the Queen of Hell in season 3.

Hilda Stands Up to Zelda

For as long as she can remember, Hilda has been living in terror of her sister. She often seems like a shy, innocent introvert, except for her rare flashes of witchy temper. Zelda has been the bully from a young age, always getting what she wants at Hilda’s expense. Still, the two sisters love each other, but after having had enough of being murdered by Zelda at every petty disagreement, Hilda puts her foot down.

In the first season, Hilda’s big moment is to move out of their shared bedroom. Zelda is heartbroken and immediately regrets her bitter words to Hilda when she vacates the single bed standing beside her own. Later in the show, Hilda takes things a step further and moves out of the Spellman Sisters Mortuary. Soon to be married to Dr Cee, Hilda moves to live with him and works with him in his shop. Of course, Hilda still visits Zelda regularly, but she becomes her own woman and no longer needs Zelda to shield her from the world.

Though their relationship is flawed in many ways, Madam Satan is still one of the best role models Sabrina has in the show. She’s manipulative, sure, but she’s more of a comic relief than a real threat. She’s first introduced to viewers as Mrs Wardwell, Sabrina’s favourite teacher at school, who is killed and possessed by Madam Satan in the pilot episode. She turns up at work the next day with a new look, but nobody questions it too much in typical Sabrina fashion.

Madam Satan subtly leads Sabrina down the Path of Night, coaxing her into committing the acts necessary to sign away her name over to Satan. Sabrina eventually learns of her true identity. At first, she’s outraged but soon realizes that the two can help each other. They end up teaming up regularly, and Madam Satan never passes up an opportunity to remind Sabrina of her power as a woman.

She’s such an empowering icon for the witches that in season 3, they choose to worship her over Lucifer. They pray to Lilith and help her when she seeks their protection from the oppressive Lucifer. In the end, she succeeds in usurping Lucifer and ruling Hell.

Sabrina’s journey begins when she’s forced to decide between light and dark. She’s grown up in half in the mortal realm and half in the celestial. On her sixteenth birthday, she must decide which life she will lead. Her family believes that she will choose the Path of Night, but her mortal friends know nothing about her witch life.

In the weeks leading up to her birthday, Sabrina dedicates a lot of time educating herself about what the choice means. She’s not entirely comfortable with being the Dark Lord’s to use as he wishes, but she also knows that being a witch could give her powers she could use for good. On the other hand, she doesn’t want to abandon her mortal friends, especially when she knows she could help them.

So, on the night of her Dark Baptism, Sabrina asserts that she will not sign her name away. She takes ownership of who she is and her unique ability to live in both worlds. As such, she continues to bring the two sides of herself together, knowing that she can never limit herself to be one thing. She later becomes Queen of Hell, paving the way for Madam Satan to take the throne eventually.

Sabrina’s choice is an assertion that her faith is just as valid as all the other witches’, especially the self-righteous Prudence. She shows the witches that humans are capable of more than they think and that witches don’t have it all right. So, Sabrina brings the best of both worlds together, uniting the mortal and celestial realms on a journey to equality.

The show combines a ’60s aesthetic with modern-day small town issues (though initially, it was to be set in the ’60s), which explains some of the backwards notions so many of the characters cling to, including the witches. They glorify giving their bodies and souls away to Satan, as well as cannibalism and self-sacrifice, and vehemently agree that women are inferior to men.

At Baxter High, Roz, Suzie, and Sabrina feel the discrimination against women all too often. The school prides itself on the basketball team’s jock culture and restricts student access to books in the library. Roz feels this keenly since she believes she’s about to go blind. Suzie in particular is bullied by the school’s male population, and instead of rectifying the issue, the male principal suggests she moves elsewhere.

Roz and Sabrina ask Mrs Wardwell – who is actually Madam Satan – for help, and she agrees to sanction WICCA, the Women’s Intersectional Cultural and Creative Association. She does this not to show Sabrina that she can be trusted but because she truly stands for the banding together of womxn at Baxter High. She has seen the injustices firsthand, and she wants to help the students stand up for themselves.

From the beginning of the show, Suzie struggles with gender identity. Assigned female at birth, Suzie realizes that this isn’t the identity she has chosen for herself. After facing harassment from the school’s basketball team, Suzie asserts herself and informs her friends that she will now be going by Theo. This makes him one of the first and only transgender characters on television, especially one who’s a series regular.

Theo has been visited by his Aunt Dorothea, who he suspects was also transgender, and chooses his name after her. First, Theo goes through the mortifying experience of going to the male change rooms at school, then trying out for the boys’ basketball team, then telling his dad about his identity:

“I was actually thinking I could maybe wear a suit to the dance. Because … I feel more myself in boy’s clothes. Actually, Dad, I don’t think I’m a girl at all. Even though I look like a girl, even though I have a girl’s name, even though you’ve always thought of me as a girl … I’m a boy. I feel good when people call me “he” …”