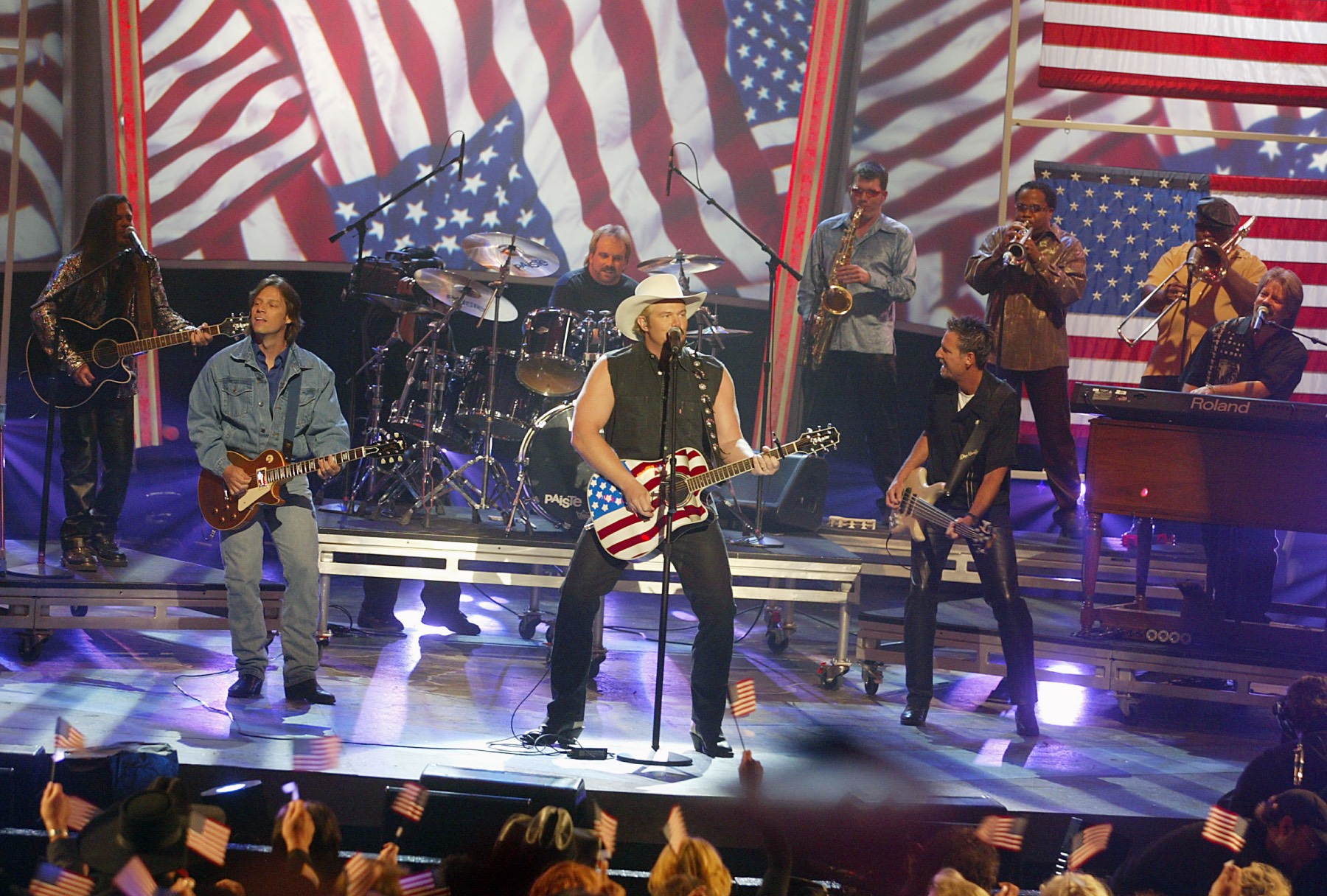 Even during a pandemic, September is the high season for Darryl Worley. From Labor Day weekend into early October, the country singer spends most of his Saturdays onstage reminding country fans about the terrorist attacks of 9/11. And this year, the 20th anniversary of the terrorist attacks on the United States, he’s been particularly busy. That’s because he’s the singer of “Have You Forgotten?” — the only Number One country song to ever mention Osama Bin Laden by name.

“We’ve got like six or seven dates in a row, just one after another from this 9/11 anniversary. We’re so thrilled,” Worley tells Rolling Stone of his touring itinerary. “It’s good work and it’s good that we’re remembering… History says if you forget it, you repeat what you did. We certainly don’t want to do that.”


Stevie Nicks Pens Remembrance for 20th Anniversary of 9/11: ‘I Became a New Yorker on That Day’

There’s no chance of that with “Have You Forgotten?” Released two years after 19 terrorists hijacked four commercial airliners and crashed them into the World Trade Center, the Pentagon, and a Pennsylvania field, the song hit you over the head with its hyper-literal lyrics. “Have you forgotten how it felt that day/to see your homeland under fire/and her people blown away?” goes the first chorus. The verses ask you to remember how “those towers fell,” with people trapped inside “going through a living hell.”

“We wanted a fifth-grader to be able to hear this song and know exactly what it was talking about,” says Worley, who co-wrote “Have You Forgotten?” with fellow Tennessee songwriter Wynn Varble. Upon its release in 2003, it spent seven weeks atop the Billboard country songs chart, reinforcing what, by that point, radio programmers, label heads and Nashville stars already knew: in the days, weeks, and years following 9/11, the public was hungry for patriotic country music.

Twenty years later, country fans, radio stations, and some of the artists who sang them hold onto the patriotic and sometimes jingoistic songs that sprang up after 9/11, even as the idea of patriotism itself has changed.

“It’s a different type of patriotism now,” Mark Razz, program director of Philadelphia country station 92.5 WXTU, says. “It’s more of a, ‘Hey, we know we have our differences, be we’re still one nation.’ We have to figure out a way to bridge the divide.”

Andie Summers, a DJ at Philadelphia’s WXTU, was on the air during the attacks. She remembers the station’s playlist changing overnight, replaced at first with conversation, news updates, and a lot of listener phone calls. When they did play songs, it was often Woody Guthrie’s “This Land Is Your Land” and Lee Greenwood’s 1984 flag-waver “God Bless the U.S.A.”

“We didn’t play much music for the next few days,” Summers says. “When we finally started again, the only upbeat songs we were playing were patriotic ones, very pro-America. Everything else was somber, reflective or comforting.”

“It was a local decision on our part, but who really drove it was the listeners. They just could not get enough. They wanted more patriotic music. And if you’re a good program director, you listen to what your fans want and give them more of it,” Curtis says.

“If you put ‘U.S.A.’ or ‘America’ in a song, you had a pretty good chance of getting attention.”

Record labels were listening, too. From 2001 through at least the midpoint of the decade, there was a glut of broadly patriotic or specifically 9/11-inspired songs delivered to radio. Alan Jackson’s “Where Were You (When the World Stopped Turning),” Aaron Tippin’s “Where the Stars and Stripes and the Eagle Fly,” Brooks & Dunn’s “Only in America,” Charlie Daniels’ “This Ain’t No Rag It’s a Flag,” Randy Travis’ “America Will Always Stand,” and Hank Williams Jr.’s “America Will Survive” — a rework of his 1982 hit “A Country Boy Can Survive” — all dropped in 2001.

In 2002, Toby Keith released his notoriously jingoistic anthem “Courtesy of the Red, White and Blue (The Angry American)” — “’cause we’ll put a boot in your ass/it’s the American way,” it threatened — with the more tempered ballad “American Soldier” following in 2003, just a few months after Worley’s “Have You Forgotten.”

“If you put ‘U.S.A.’ or ‘America’ in a song,” Curtis says of that era, “you had a pretty good chance of getting attention.”

Few hit the mark quite like “Where Were You (When the World Stopped Turning),” a somber everyman ballad that succeeded in part because of Jackson’s admitted ignorance. Jackson wrote the song by himself, and it’s his voice that professes to not be a “political man” nor quite grasp the differences between Iraq and Iran. While it resonated across genres — it was a country Number One and broke into the Top 30 on Billboard’s Hot 100 — “Where Were You” was explicitly a song for those who, like Jackson and his listeners, lived far from New York or D.C. and were struggling to make sense of what happened there. The lyrics leaned heavily into Christian teachings of faith, hope, and love.

Joe Galante, former chairman of Sony Music Nashville, oversaw Jackson’s Arista Nashville label when the singer debuted “Where Were You” at the CMAs.

“It exploded instantly,” Galante says, recalling the clamor for a recording of the song. “It was, ‘When can we play that? How do we get a copy?’ People were recording it off air. So we took the live performance from the CMAs and fed it to the radio stations. That song gave you hope, belief in your fellow human man, and he was telling you to just love one another and you’ll get through this.”

But not every post-9/11 country song preached such compassion. Keith’s “Courtesy of the Red, White and Blue,” Williams’ “America Will Survive,” and Daniels’ “This Ain’t No Rag It’s a Flag” burned with aggression. Williams lobbied for bringing back a “tooth-for-a-tooth and an eye-for-an-eye” in his lyrics, while Daniels sang, “We’re coming with a gun, and we know you’re gonna run…We’re gonna hunt you down like a mad dog hound/make you pay for the lives you stole.”

Galante says the anger was understandable. “The reality is we all felt various emotions. I don’t know anybody who was going, ‘Hey, let’s just lay back and sit here and take this.’” He singles out three songs that satisfied the diversity of emotions at the time: the love and comfort of Jackson’s “Where Were You,” the hope and optimism of Brooks & Dunn’s “Only in America,” and the fury and rage of Keith’s “Courtesy of the Red, White and Blue.”

“If you take those three songs, and listen to the vocals, there were three different tones from the singers and each of them were valid. Each of them emphasizes the point and we felt all those emotions. They were all part of it,” he says.

It wasn’t only country music’s male stars who were releasing patriotic songs. During the very same awards show that Jackson premiered “Where Were You,” the then-Dixie Chicks performed “Travelin’ Soldier,” their tender dissertation on the sacrifices made by military families. “People forget about this for some reason, or don’t want to admit the Chicks had a recording career,” Curtis says, “but it was the same night on the same show.” (Two years later, the Chicks would be blackballed by the industry after singer Natalie Maines criticized President George W. Bush for rushing into the Iraq War.)

As country radio preps for 9/11’s 20th anniversary, WXTU’s Razz says unity will be the underlying theme. He’s programming songs like Kane Brown’s “Worldwide Beautiful,” Tim McGraw and Tyler Hubbard’s “Undivided,” and, of course, “Where Were You.”

“We came through a tumultuous election and people want to be more united. They’re looking for that,” he says. “That’s what we’re trying to portray here. I want to be careful of playing war theme songs, because especially with current events, people are confused and raw. It was a different time 20 years ago.” 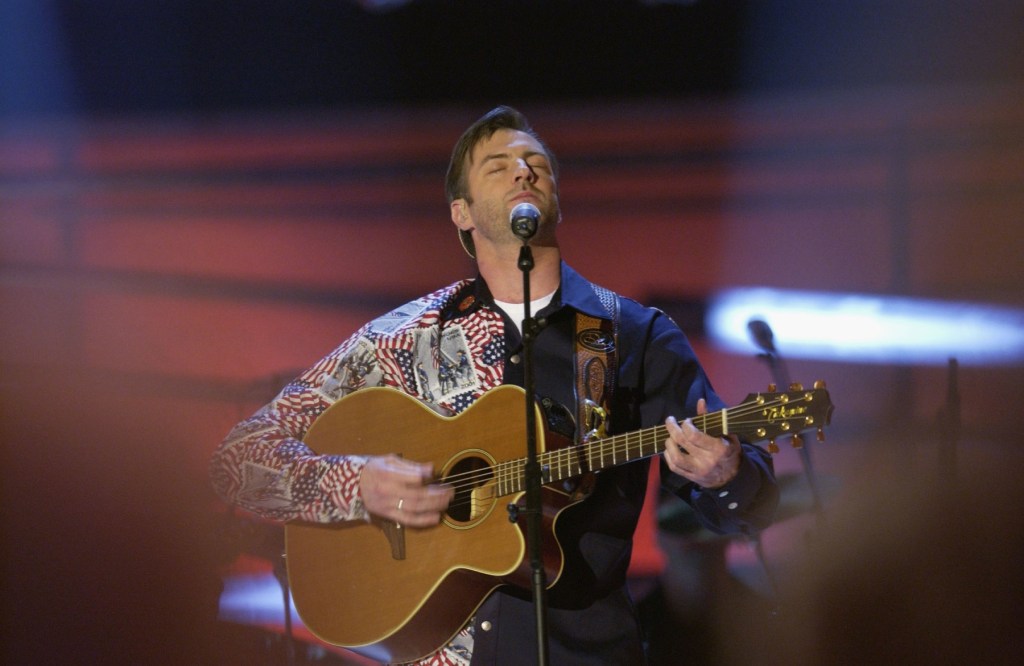 Darryl Worley performs “Have You Forgotten?” at the CMT Awards in 2003.

Two decades later, some post-9/11 songs are still heard regularly on country radio. But Curtis says the majority surface only a few times a year and are played from “a nostalgic standpoint.” In other words, the overt jingoism is now dated.

“They’re not something that will be put in rotation beyond 9/11,” he says. “‘Where Were You’ is the one that will stand up, but I’m not sure ‘Courtesy of the Red, White and Blue’ or even ‘Have You Forgotten?’ are going to.”

Worley, who recently partnered with a veteran-owned distillery to create a line of “Have You Forgotten”-branded whiskeys to support veteran charities, begs to differ. He says his song has been having a resurgence since the U.S.’s chaotic withdrawal from Afghanistan.

“With the whole Afghanistan debacle, it’s almost like this song has been re-released. It may be more relevant right now than it ever has been,” he says. “I’m not certain that we as a people are not more vulnerable now than we ever have been in the history of our nation.”

Worley’s song is nearly 20 years old itself, but over the last few weeks Jason Aldean and Brantley Gilbert have both released obliquely patriotic new songs, a sign that a fresh crop of pro-America country material may be coming. Both singers dedicated their tracks — Aldean’s “Have a Beer on Me,” Gilbert’s “Gone But Not Forgotten” — to the 13 service members killed in Afghanistan last month. “Coming from a Military family, it’s been tough to find the words to express how I feel for what’s happened in Afghanistan,” Aldean wrote in an Instagram post that set “Drink One on Me” to images of soldiers in Afghanistan. “It’s heartbreaking and unforgivable. We appreciate your service and thank you all for your sacrifice.”

Rallying around the flag will always remain a pillar of country music, but it’s hard to not see the foundation cracking a little. Says RJ Curtis, “The format is still patriotic, but with all of the divisiveness and politicization, I’m not sure it’s as strong as it was.”