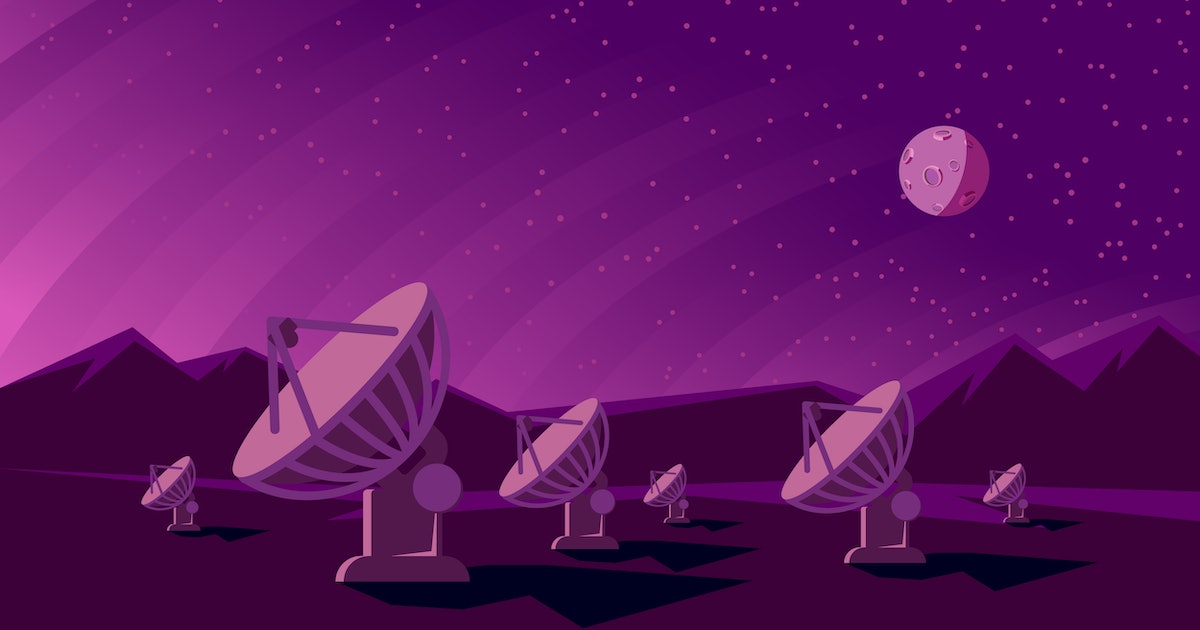 In 1950, Italian-American physicist Enrico Fermi sat down to lunch with some of his colleagues at the Los Alamos National Laboratory, where he had worked five years prior as part of the Manhattan Project. According to various accounts, the conversation turned to aliens and the recent spate of UFOs.

Into this, Fermi issued a statement that would go down in the annals of history: “Where is everybody?”

This became the basis of the Fermi Paradox, which refers to the disparity between high probability estimates for the existence of extraterrestrial intelligence (ETI) and the apparent lack of evidence.

Since Fermi’s time, there have been several proposed resolutions to his question, including the possibility that everyone is listening, but no one is broadcasting — otherwise known as the “SETI-Paradox.”

This theory comes down to the noticeable divide between what is referred to as “passive SETI” and “active SETI,” the latter of which is more commonly known today as Messaging Extraterrestrial Intelligence (METI). These differences in approach have become the focal point of attention in recent years as the two have become more differentiated, and the latter has become more common.

Passive SETI, which is generally characterized by listening to space for signs of radio communications (or other discernible technosignatures), accounts for the vast majority of SETI measures to date. This includes what is arguably the first example of an extraterrestrial radio search, which was performed by Nikola Tesla in 1899 while conducting experiments at his Colorado Springs laboratory.

On this occasion, Tesla believed he had detected an extraterrestrial radio signal because of the way it ceased as soon as Mars set in the night sky. Further analysis proved inconclusive, and explanations included radio interference from a neighboring experimental station, a misreading of the results, and background noise caused by Jupiter’s moon Io passing through its magnetic field.

The first modern SETI experiment, which took place in 1960, was also passive by definition. This was Project Ozma, a survey led by Cornell astronomer Frank Drake that relied on the 26-meter (85-foot) radio telescope at the Green Bank Observatory in West Virginia. The project examined the nearby stars Tau Ceti and Epsilon Eridani for signs of radio transmissions in a 400-kilohertz band around the 1.420 Gigahertz marker frequency.

The concept of METI as being distinct from SETI is a relatively recent development. Russian scientist Alexander Zaitsev coined the term METI in a 2006 paper of the same name. As Zaitsev emphasized:

“The science known as SETI deals with searching for messages from aliens. METI science deals with the creation of messages to aliens. Thus, SETI and METI proponents have quite different perspectives. SETI scientists are in a position to address only the local question ‘does Active SETI make sense?’

“In other words, would it be reasonable, for SETI success, to transmit with the object of attracting ETI’s attention? In contrast to Active SETI, METI pursues not a local and lucrative impulse, but a more global and unselfish one – to overcome the Great Silence in the Universe, bringing to our extraterrestrial neighbors the long-expected annunciation ‘You are not alone!’”

Meanwhile, the first attempt to send a message was directed at Venus in 1962 by scientists from the Evpatoria Planetary Radar (EPR) center in Crimea. This was known as The Morse Message, which consisted of a radio transmission sent in Morse Code — the letters M-I-R (Mir, the Russian word for “peace”) followed by “Lenin” and “SSSR.” In 1974, the most powerful (and most famous) broadcast was beamed to space from the Arecibo Observatory in Puerto Rico.

This was known as the Arecibo Message, a 1679 bit transmission arranged into 73 lines (23 characters per line) of binary code. The message consisted of simple images of the Arecibo telescope, the Solar System, DNA, a stick figure of a human, and some of the biochemicals of earthly life. The message was aimed at the globular star cluster M13, located roughly 21,000 light-years from Earth, near the edge of the Milky Way galaxy,

Between 1999 and 2003, three transmissions (Cosmic Call 1, Teen Age Message, and Cosmic Call 2) were all made from the Evpatoria Planetary Radar (EPR) center in Crimea to various nearby stars. Whereas Cosmic Calls consisted of code denoting the alphabet, numbers, periodic table, and scientific concepts, the Teen Age Message consisted of a coherent sounding signal, an analog message encoded in Theremin music, and digital data (images and text).

In 2012, on the 35th anniversary of the Wow! Signal, a reply was transmitted from the Arecibo Observatory.

This message, known as the “Wow! Reply,” consisted of more than 10,000 Twitter messages and videos from celebrities. In 2016, the radio message “A Simple Response to an Elemental Message” (ASREM) was transmitted from the ESA’s Cebreros Station (DSA2) towards Polaris. This message consisting of 3775 worldwide responses to the question, “How will our present, environmental interactions shape the future?” and a series of images of Earth.

In 2016, Israeli-Russian billionaire Yuri Milner announced the creation of Breakthrough Initiatives, a non-profit organization dedicated to investigating the fundamental questions of life in the Universe. Among their suite of space science programs is Breakthrough Message, an international competition to create an interstellar message. This program is intended to encourage debate about how humanity could communicate with extraterrestrial intelligence.

At present, there are no plans to send the message until there is a wide-ranging debate among scientists and world leaders about the ethical and philosophical issues involved. However, Breakthrough Initiatives has hinted that once these issues are addressed at length, this might change.

To Listen or to Message?

To date, all attempts at METI (also known as active-SETI) have been very humble compared to traditional (or passive) SETI efforts. As Zaitsev summarized:

“[O]ur civilization is indeed in the communicative phase and it indeed conducts SETI activities. However, our METI/SETI ratio is less than one percent: these data follow from the review of Jill Tarter published in the recently released “SETI-2020” collection of papers (Tarter 2003).

“It lists 100 various SETI programs starting from the first OZMA project to our time. The total time of search is several years, whereas the total transmission time is only 37 hours (Zaitsev 2006). This characterizes the attitude of researchers. However, we must also take into account the METI-phobia inherent to the planetary consciousness as a whole.”

In short, METI efforts have been limited in large part because of the very real fear that broadcasting humanity’s existence to the Universe could have serious consequences. Notable critics include Stephen Hawking and famed scientist and author David Brin. In a 2006 article titled, “Should we be Shouting at the Cosmos,” Brin expressed how many notable scientists objected to METI:

“Let there be no mistake. METI is a very different thing than passively sifting for signals from the outer space. Carl Sagan, one of the greatest SETI supporters and a deep believer in the notion of altruistic alien civilizations, called such a move deeply unwise and immature. (Even Frank Drake, who famously sent the “Arecibo Message” toward the Andromeda Galaxy in 1974, considered “Active SETI” to be, at best, a stunt and generally a waste of time.)

“Sagan — along with early SETI pioneer Philip Morrison — recommended that the newest children in a strange and uncertain cosmos should listen quietly for a long time, patiently learning about the universe and comparing notes, before shouting into an unknown jungle that we do not understand.”

What’s more, Brin argued that Zaitsev’s constituted a modified form of Universal Altruism (UA), a Soviet-era doctrine that states that all advanced civilizations naturally evolve towards the altruistic and socialistic:

“Ironically Dr. Alexander Zaitsev has modified this doctrine to suggest that advanced aliens are not only altruistic but also cowardly — thus explaining their failure (so far) to create beacons or beam messages at Earth. He reasons that the youngest and most ignorant technological race (humanity) is behooved to overcome this universal cowardice by boldly announcing ourselves...“If aliens are so advanced and altruistic… and yet are choosing to remain silent… should we not consider following their example and doing likewise? At least for a little while? Is it possible that they are silent because they know something we don’t know?”

This is reminiscent of the “Dark Forest” Hypothesis, another possible resolution to the Fermi Paradox (which was covered in a previous installment). According to this hypothesis, ETIs are not in the habit of broadcasting their existence for two major reasons — “Chains of Suspicion” and “Technological Explosions.” Civilizations could essentially be either malevolent, which are likely to attack others for the sake of territory, resources, conquest, etc.

Benevolent civilizations, in contrast, are not likely to attack others unless they feel threatened. Unfortunately, the time lag imposed by interstellar communications prevents open communication from being established. Since the intentions of other species cannot be gauged, this creates a “chain of suspicion” where both sides are left to consider if it would be wise to attack first until one of them finally does.

The other assumption involves technological development, which is exponential (if human history is any guide). Given how long it would take to reach even the nearest stars, any fearful civilization would likely conclude that it would be futile to send a fleet of warships to attack another species. By the time they arrived, the attacker’s technology would not have matured one bit, while the defender would have progressed by decades or centuries.

Under these circumstances, it is entirely reasonable to theorize that most ETIs (who are also contemplating if they are alone in the Universe) have chosen to take the “passive SETI” approach rather than actively seek contact and advertise their existence to the Universe. If this is the conclusion that most advanced species have reached, then the “Great Silence” is entirely understandable.

Criticism of the Great Silence explanation

Like many proposed resolutions to the Fermi Paradox, this hypothesis assumes that the behavior of extraterrestrial civilizations is uniform. Similar to the Dark Forest and Zoo Hypotheses, all that is required for the “Great Silence” to be broken is for one ETI to speak out. And given humanity’s experiments with crafting interstellar messages, it is hard to believe that one civilization would be able to enforce a “radio silence” policy, let alone many.

In addition, if any civilization were to detect a signal from Earth (much like Carl Sagan explored in his novel Contact), it’s safe to assume that they would want to respond to it. Douglas Vakoch, the president of METI, argued that passive SETI is already an endorsement of active SETI, since “If we detect a signal from aliens through a SETI program, there’s no way to prevent a cacophony of responses from Earth.”

Alas, the fact that we have no signals to go by and are not even sure if the “Great Silence” is real or perceived, no conclusions can be drawn at this time. But as theoretical frameworks go, it has a ring of truth to it. It is entirely possible that we are not picking up signals from extraterrestrial civilizations because they don’t want to broadcast their existence either. After all, if you were an alien civilization, would you want to talk to a species like us?

This article was originally published on Universe Today by Matt Williams. Read the original article here.