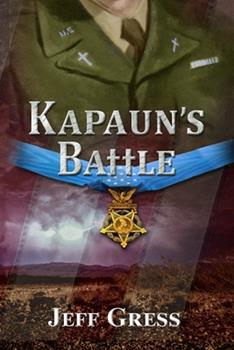 Kapaun’s Battle is a book of character and strength during a time of despair.

Getting to know the people behind the story is a way to see the passion they have with developing a book such as Kapaun’s Battle.  Our interview is with Ian Gorman. He oversees the development and editing process of Kapaun’s Battle.

Tell us about you?

I am a British-born, US/UK dual citizen and proud citizen of the State of Texas. I grew up near Cardiff in South Wales, in the ear of coal mine closures. Having secured a place a Cambridge University to read Science starting in 1984, I opted instead to go to Glasgow University a year earlier to read Natural Philosophy (Physics). I emigrating to the USA, where I initially worked as a stockbroker and studied for my MBA.  Was hired by a fast-growing direct marketing firm with which I relocated to Houston where a few years later I met Ron Mumford whilst working at a Public Relations Firm in the year 2000 and we have worked together on several projects over the years since.

What is 3rd Coast Books?

3rd Coast Books is a Hybrid Publisher that is focused on publishing novels and biographies that have the potential to make great movies or TV shows. The experience of our partners and contractors spans the past 40 years.

How did you get involved with 3rd Coast Books?

During 2019, when I was looking after my mother, who had very late-stage Parkinson’s, Ron contacted me and asked if I would like to become involved with 3rdCoast, initially doing some editing and looking at the internal processes. It seemed to be something I could do concurrently with my caring duties and allow me to use the editing and business skill-set I had accumulated over the decades.

What is your role in developing the book “Kapaun’s Battle”?

My role was to oversee the book’s development and editing process.  The 3rdCoast team consists of individuals who reviewed Jeff Gress’s manuscript from very different perspectives:

Dr. Faye Walker is an English professor, so her focus was on the structure and grammatical aspects of the manuscript.  She provided several expansions within the story to increase the depth of some characters and to increase the level of descriptive detail throughout.

Ron Mumford is a former U.S. ARMY Public Information Officer who served in Vietnam in 1970. This enabled Ron to provide crucial insights into the relationships between the characters, particularly between Master Sargeant Bill Richardson and the junior officers, who outranked him but needed to rely on his vastly greater combat experience to survive.

I have been an avid military historian since childhood, mostly focused on technology and tactics. My edit was focused on the believability of the timeline, the continuity and consistency within the story, and the technical details of the hardware that was deployed during the first year of the Korean War. I was able to insert smatterings of information about how many of the weapons were operated, the payloads carried by aircraft, the types of planes, tanks, and helicopters in the early Korean War battle zone. Acknowledging that Kapaun’s Battle is a dramatization of Father Kapaun’s experiences during the Korean War as opposed to a strict biography, I thought it essential to maximize the degree of historical accuracy without corrupting the dynamic storyline.

Tell us does the movie mirror the book?

Currently, the movie’s screenplay aligns very strongly with the book. This is a benefit of the timing of the project and the way the book and movie teams have worked so closely together.  There are of course some deviations given that an approximately 2-hour long movie would rarely contain the entirety of the material in the corresponding book. There may be a few scenes for the book that don’t make it into the movie and there will be some minor changes in scene sequence and overlaps to provide a heightened dramatic effect in the movie that would not read well if replicated in the book.  Once the screenplay is worked over by the movie’s director and actors some further changes should be expected.

What do you hope to accomplish with “Kapaun’s Battle” the book and movie?

There are several things that 3rdCoast and our partners at 360 Studios would like Kapaun’s Battle to accomplish. First, both companies’ objectives are the production of high-quality entertainment products that will be well-received by movie lovers and readers around the world – this is the foundation of our partnership. Second, we want to spread the word about Father Emil J. Kapaun to a much larger audience. Kapaun already has extensive exposure within the U.S. military, Korean War Veterans, and the Roman Catholic Church, but we want to expand this audience to include persons from all walks of life who are interested in a story about a true American/Military/Christian hero.  We sincerely believe that the return to basics of good human behavior is increasingly attractive to large numbers of people from all backgrounds.

Kapaun’s Battle gets a  5 -Star rating from Holly Entertainment News.

How can people learn more about you and your projects?

Teddy & The Rough Riders Find Respite in ‘Livin’ in the Woods’
Lainey Wilson Tames a Wild Horse in the New ‘Heart Like a Truck’ Video
Can Labor Activists Be Style Icons?
Book Riot’s Deals of the Day: May 26, 2022
Florida Georgia Line’s Tyler Hubbard Makes Solo Debut With ‘5 Foot 9’