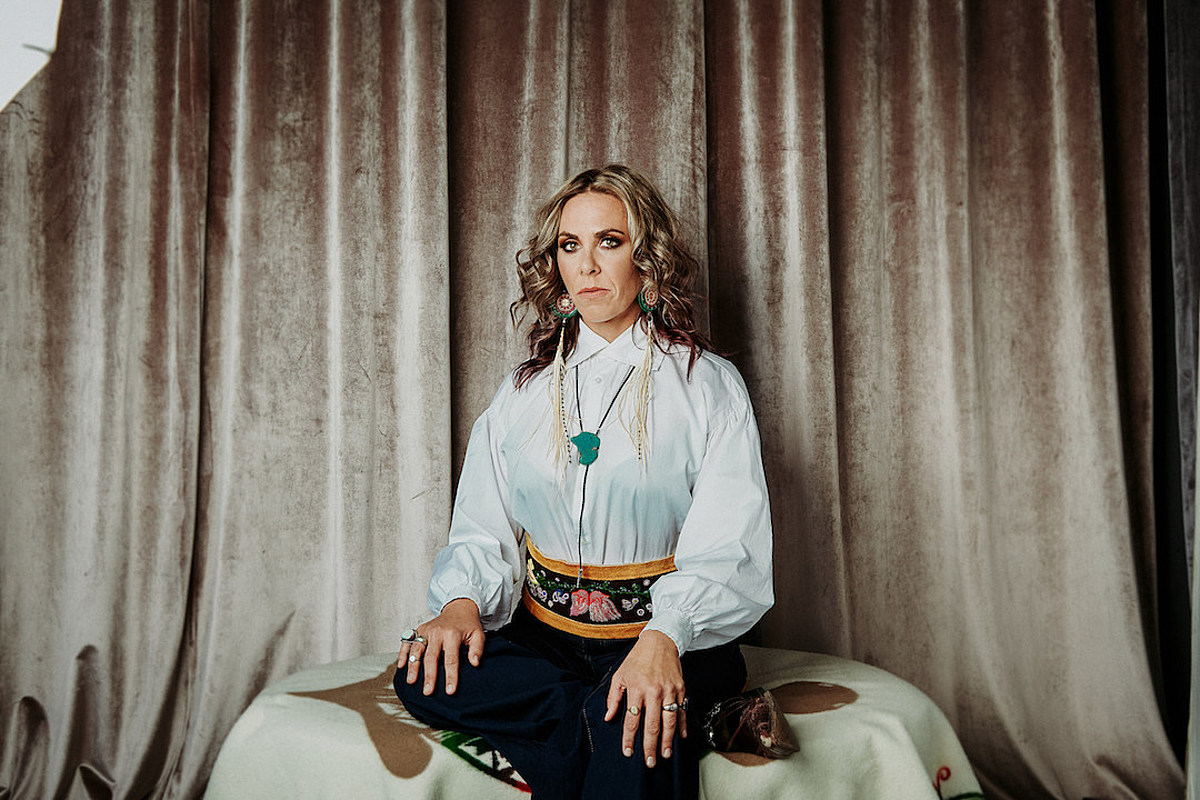 JUNO Award nominee and Canadian Folk Music Award winner Amanda Rheaume embraces her indigenous identity and the history of her ancestors on The Spaces In Between, her sixth studio album due out May 27 via Ishkōdé Records.

Living on unceded Algonquin Anishinaabe territory also known as Ottawa, Canada, Rheaume is a member of the Métis Nation and 2SLGBTQ+ community. She explores her identity, history, sense of belonging, the impacts of the colonial agenda and more on The Spaces In Between, her first record since 2019. All of the songs were written between April 2020 and early 2021, and many of those tracks were born out of writing sessions with new friend Sierra Noble.

One of the first songs they penned together was “Death of the American Dream,” a track that touches on several elements of society like worker burnout, global warming, climate change, colonization, political division and even the pandemic. After laying out all of the things that are making that dream impossible for so many, Rheaume ends the song with the vision of a new American Dream — one where we lead with our hearts and don’t take more than we need, fostering a world we can all take joy in.

Another cut Rheaume penned with Noble was “Do About Her,” which directly confronts her personal struggles with her own identity, appearance and how people would often refer to her, singing:

Helping to keep her grounded in her identity throughout her life has been Tony Belcourt, a Métis leader who is also featured on the album with four spoken word interludes, which provide further context on Métis culture and the record’s other themes.

“I’m a white presenting, light-haired, light-eyed Métis woman so I haven’t experienced racism the same ways my kin have,” Rheaume tells The Boot. “I still have struggles with my identity though, but Tony [Belcourt] has always been there to support me. He’s been instrumental in me becoming the proud Métis woman that I am today.”

From embracing her identity on songs like “Do About Her” and “All Sides of Me” to trusting her intuition on “The Spaces In Between,” Rheaume documents all parts of her journey on the album. The track also examines the far-reaching impacts of colonialism and how division allows the powers that be to further exploit the public, natural resources and more. Like much of the album, Rheaume also ties this back to the theme of identity in the song by likening her heritage to a garden, singing:

“Colonialism tries to make people this or that, but the spaces in between are where all the growth happens,” says Rheaume. “Nobody is a single layered person no matter their nationality or background. We’re all multi-faceted, and this song gets to the bottom of that.”

Part of Rheaume’s way of combating this is through her work with Ishkōdé Records, an independent and women-owned label she started in 2021 with fellow artist, activist and community organizer Anishinaabekwe ShoShona Kish (Digging Roots) to give a platform to other indigenous musicians like themselves. The label is partnered with Universal Music Canada for distribution and also includes Morgan Toney, a Mi’kmaq songwriter and fiddler from Wagmatcook First Nation in Nova Scotia, and Aysanabee, a Toronto-based artist also known as Oji-Cree, Sucker Clan of the Sandy Lake First Nation.

“We wanted to amplify songs and stories from indigenous artists that we feel are undeniable and critical to the larger discourse of mainstream music,” says Rheaume. “We’re really looking to shatter glass ceilings and bust open doors for our artists that have previously been closed to them.”

Translating to “fire” from Anishinaabemowin — an indigenous language that’s part of the Algonquian language family — Ishkōdé is greatly inspired by the Ojibwe prophecy, which talks of eight fires representing different periods of time in the Ojibwe people’s history. After the seventh fire has been lit, a prophet appears with knowledge of what’s to come, a period of turmoil with humanity at a crossroads. They lay out two paths to take — the current one we’re on with expanding technology and colonization, or a path that returns to our roots and original teachings. If the second path is chosen then the eighth fire will be lit, leading to a time of forever peace and harmony.

“Our main value is finding songs for that eighth fire,” says Rheaume. “So we’re looking to work with artists that are adding their voice to that story to help us light that fire.”

According to Rheaume, she was inspired to begin singing with a more purposeful message after traveling to Afghanistan over a decade ago to perform for American and Canadian troops stationed there. She explained how her first few times playing there left her questioning the message of her music, as she looked out at an audience of troops who were risking their lives in a ruthless desert environment and missing their families. She quickly realized that she had to change up her routine.

“I have a responsibility everytime I stand on stage to sing about things that mean something because when I sing a note and play my guitar I’m sending those vibrations out to the audience,” says Rheaume. “Thinking in that way, I feel a call of duty to bring forward messages of hope and love or illuminating situations that inspire change. Music is a universal language that transcends other barriers we have dividing us as humans to make us more vulnerable and empathetic people.”

In that sense, Rheaume sees herself in the same light as other artists who’ve made protest music in the past like Bob Dylan, Crosby, Stills, Nash & Young; Nina Simone and Sam Cooke. She aims to sing with conviction about her identity and what she believes in, saying that it’s a less aggressive way to bring up differences and start a dialogue. She accomplishes all this and more on The Spaces In Between, helping people of all backgrounds to take ownership of their heritage, be proud of who they are and feel validated in discussing their unique life experiences.

“We need to look back to take notice of where we are and where we need to go,” says Rheaume. “I hope that people can listen to these songs and come to a place within themselves of self acceptance no matter what makes up their identity. All of our voices are needed in the circle to make it as strong as possible. Everyone should be given a seat at the table exactly as they are.”

This list focuses on the winners of the Grammys’ Best Americana Album category since it was created in 2010. The Grammys are known for their eclectic choices in nominees, and this list fittingly includes a mixture of well-known names, lesser-known artists and cross-genre icons.