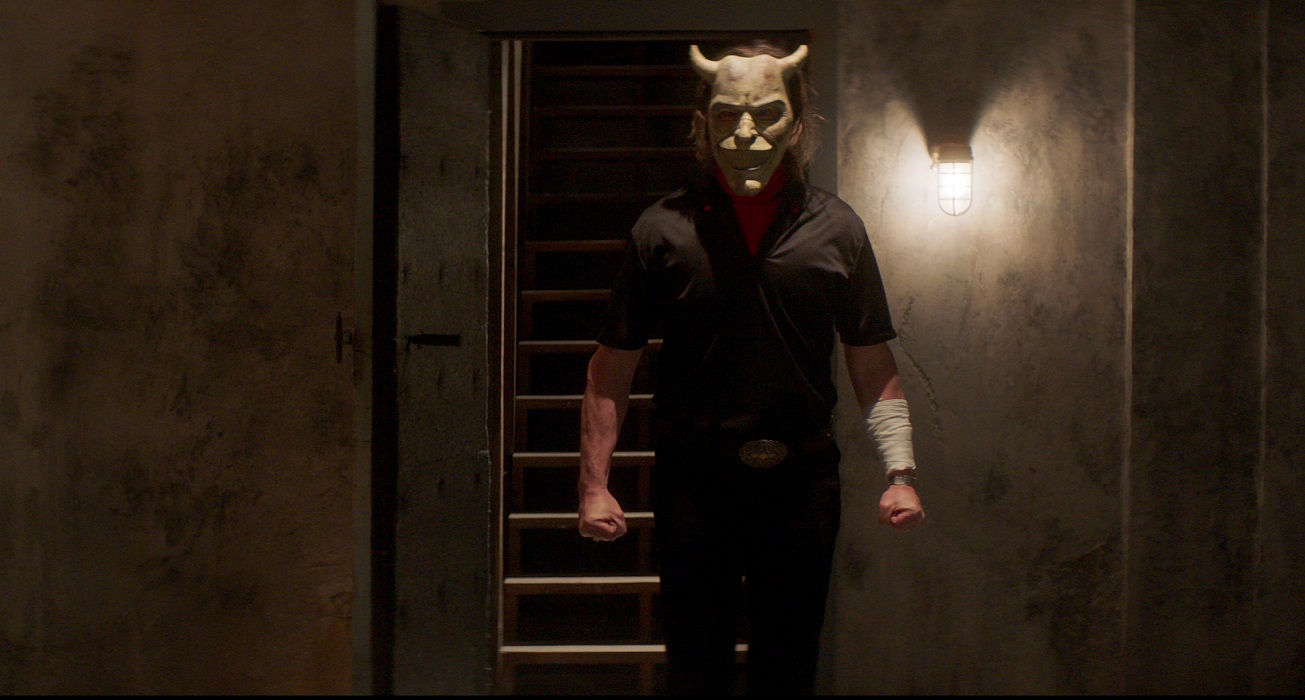 Based on Joe Hill’s The Black Phone

Jason Blum of Blumhouse has made a name for himself in the world of horror, distributing some of the genre’s most terrifying films. In ‘The Black Phone’, were treated to a supernatural horror featuring a kidnapped child and a telephone that can communicate with the dead. This film gives horror fans everything they could want from the genre.

‘The Black Phone’ follows Finney Shaw (Mason Thames), a shy but clever 13-year-old boy, who is abducted by a sadistic killer and trapped in a soundproof basement where screaming is of little use. When a disconnected phone on the wall begins to ring, Finney discovers that he can hear the voices of the killer’s previous victims. And they are dead set on making sure that what happened to them doesn’t happen to Finney.

Finney is also an ace baseball pitcher burdened by a dead mother, school bullies and an abusive, alcoholic father (played by Jeremy Davies). He shares a close relationship with his medium younger sister Gwen (played by the amazing Madeleine McGraw). An early lecture from a new friend (Miguel Cazarez Mora) about fighting back will prove to be prominent advice, when Finney becomes the latest victim of The Grabber (Ethan Hawke), a clownish magician and the abductor of several neighborhood boys.

After director Scott Derrickson left Doctor Strange in the Multiverse of Madness due to creative differences, Derrickson and writer C. Robert Cargill teamed up to adapt this short story by Joe Hill. Derrickson and Cargill deliver an excellent first half that sets up the world of a 1970s Denver suburb before the horrifying inciting incident. ‘The Black Phone’ goes down a path of combining both a survival thriller and a supernatural horror fest. The unsettling musical score keeps viewers compelled as Finney is put into a situation where he must find an escape.

I recently found out that ‘The Black Phone’ was based on a short story by Stephen King’s son, which would probably explain why this film embodies a eerie feeling of dread, an element true horror fans relish watching.

While Hawke does an amazing job delivering the creepy Grabber to life, the clear standouts are easily in the young cast of Mason Thames and Madeleine McGraw. Even when we got the chance to talk to Madeleine here at OLC! we knew she had a bright future in Hollywood. McGraw plays a child medium who inherits her abilities from her mother, and when she has scenes alone, grappling with weird visions and grief over her missing brother, this child actor shows vulnerability and a maturity that takes some actors decades to develop.

Thames carries much of the screen time and pulls off many complex and emotional scenes. The film features many uncomfortable scenes, and while it may not be easy to watch, you have to hand it to both Thames and McGraw, for selling these situations enough to make them believable.

‘The Black Phone’ is filled with jump scares and grotesque images, full of twists and turns, that doesn’t try to outsmart or confuse its audience. ‘The Black Phone’ focuses on what matters and delivers a spine chilling piece of entertainment.

‘The Black Phone’ is out in Australian cinemas 21st of July.