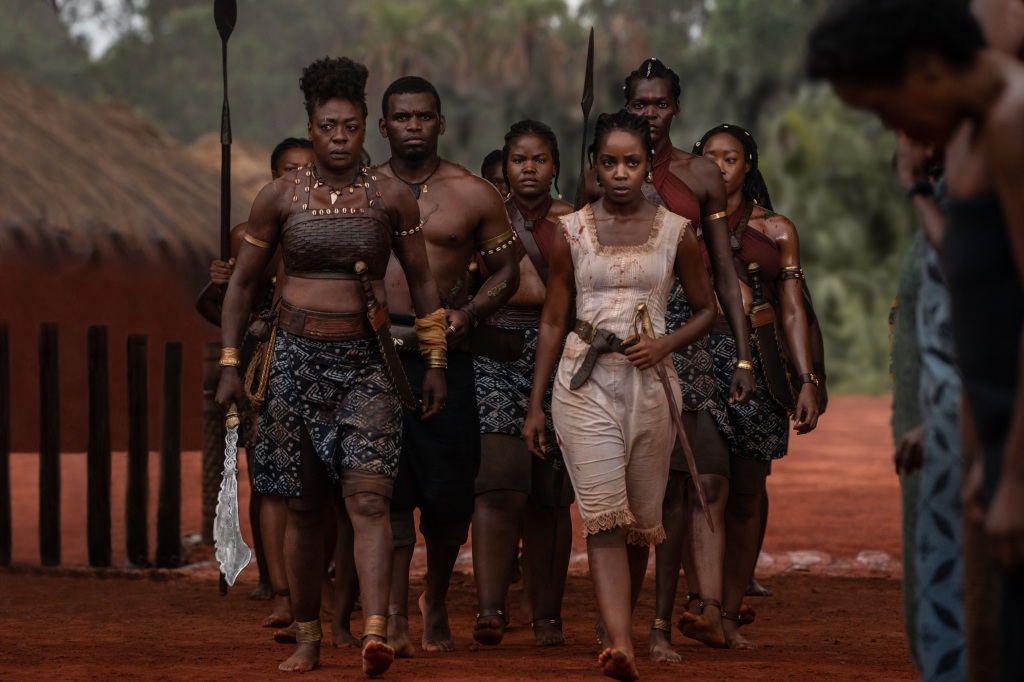 Saturday AM Update: TriStar/eOne’s The Woman King is coming in higher than expected, with an $18M opening boosted by lively word of mouth off an A+ CinemaScore and a massive 95% positive on Comscore/Screen Engine’s PostTrak. Friday, including $1.7M previews, came in at $6.8M.

Comping this Black female epic to previous Hollywood titles was a challenge, but that’s also what made the project extremely appealing; the fact that there’s been nothing else like it, as TriStar Boss Nicole Brown said at TIFF last weekend. Some were guessing that Harriet ($11.6M) and Viola Davis’ Widows ($12.8M) were the right comparisons, but even going back to Thursday previews, Woman King has already bested those numbers. No theatrical window has been indicated yet for the Gina Prince-Bythewood directed movie, which indicates Sony’s commitment for the long haul theatrically for this movie during awards season.

Should this Viola Davis-produced and starring vehicle go higher, that will hinge on business tonight and even Sunday’s, when Sony is expecting the churchgoing demo to head to cinemas.

As expected, women are the majority at Woman King at 60%, with 58% over 35 and 39% over 45, another promising sign for an older demographic that was reluctant to head out during the height of the pandemic. Black moviegoers turned out at 59%, with Caucasians at 19%, Latino and Hispanic at 12%, and Asian/other at 10%. The Woman King saw its best business in the East and South, where seven of the top ten runs came from. LA’s AMC Burbank and the Grove also ranked in the top ten, along with the Country Club in Chicago. PLF screens and Imax auditoriums are repping 43% of Woman King‘s weekend ticket sales at this point in time. Best markets were NYC, Atlanta, DC, Dallas, Houston, Chicago, Philly, Miami, Baltimore, Orlando, Detroit, and Tampa.

Below is Deadline’s interview out of TIFF with The Woman King:

20th Century Studios/Disney’s Barbarian is holding up pretty spectacularly for a horror movie at -38% (they’re typically down -65% in weekend 2) with an estimated $6.5M. Disney always had a feeling the pic would thrive off of hot buzz; that’s why they went theatrical with it. Curious to see how far this might be able to go in the long run. Pic’s second weekend will bring its ten-day running total to $21.1M.

A24’s horror movie Pearl, which got an extra boost with a run at TIFF last weekend after its world premiere at Venice, is expected to come in slightly lower than the $4M debut of its predecessor, X, with a $3.2M start in third place. The R-rated Ti West-directed movie skewed 53% guys, with 79% between 18-34. Grades were meh, though on par for a horror movie, at B- CinemaScore and 75% positive, 54% recommend from PostTrak. The coasts and Southwest were potent here, with nine of the top ten runs. Alamo counted four of the top ten. Demos were 51% Caucasian, 25% Latino and Hispanic, 11% Black, and 13% Asian/other.

Searchlight’s wide release of comedy caper See How They Run, directed by Tom George and starring Sam Rockwell and Saoirse Ronan, didn’t have the best reviews at 70% on Rotten Tomatoes. While Searchlight had a lot at the festivals, i.e. The Menu and Chevalier at TIFF and The Banshees of Inisherin and Empire of Light at TIFF and Venice, this title wasn’t in the mix, and I hear it was just merely a pithy title, not really one with any awards patina.

Still, applause is needed for this movie going theatrical vs. Hulu, as Disney has confined Searchlight to a set amount of big screen releases annually. As we’ve been preaching throughout this part of the pandemic, anything is better with a window, even for an OTT service, and See How They Run is at 45 days. With an estimated $2.7M in fourth at 2,404, the pic falls in the range of Searchlight’s projections. The caper played best on the coasts and Midwest, but results were OK: Only a third of the pic’s runs were over $500 last night. Friday’s $1.08M includes $200K Thursday previews.

However, if there’s life in the arthouse sector, it’s coming from NEON’s Brett Morgen-directed David Bowie doc Moonage Dream, which is chalking up an awesome $7K per theater at 170 locations for what looks to be a $1.2M opening in No. 10. Bravo. The movie in 77 markets is putting up excellent ticket sales in NYC, LA, San Francisco, Chicago, San Diego, and Toronto. The pic premiered in the Midnight section at Cannes back in May.

Another film capturing a bulk of screens during this dry period at theaters is UP2U Films’ faith-based drama Running the Bases, from directors Marty Roberts and Jimmy Womble. Logline: When a small-town baseball coach gets the offer of a lifetime from a larger 6A High School, he uproots his family and leaves the only home he’s ever known, but soon faces opposition to his coaching methods from the school superintendent.

Paramount has the Miramax Jon Hamm title Confess, Fletch, which is theatrical day-and-date on PVOD. Booked at 516 locations, the pic did $96K yesterday for what is a $255K 3-day opening.

While the industry, especially during awards season, calls for the need for diverse films, Focus Features has the wonderful, and emotionally moving The Silent Twins, which made its premiere in Un Certain Regard at Cannes. This Agnieszka Smoczynska-directed drama was amazing in its based-on-a-true story of June and Jennifer Gibbons, who spent their childhood only communicating with each other, and yielding brilliant, creative endeavors.

However, they hit teenage-dom, open up and fall in love with the same guy, and everything goes sideways. It’s a tragic, jarring story. With $97K at 279 theaters (a $347 theater average), the movie isn’t making waves on the arthouse set when it should. It’s so early on the fall release schedule here, I don’t even know if Focus screened the movie for Academy members. The pic is truly underrated, and critics were too harsh at 60% fresh. Really, this is a movie that could have made a dent and with reviews like that, I don’t know if Focus will carry this Letitia Wright production further into awards season. I heard there would be an expansion next weekend, then heard that’s not the case. It’s very upsetting, as this is a very original movie, much like when Moonlight came on the scene, that deserves much more attention, support and push.

Here’s our interview with Silent Twins out of Cannes:

All of these wide releases spell a weekend that’s estimated at $51M for all titles. While +16% from last weekend, it’s the fourth-worst weekend YTD. So far, there has only been 14 weekends in 2022 that have grossed over $100M. Three weekends have seen all movies grossing north of $200M+.

Friday AM: The Viola Davis-produced and -starring warrior pic The Woman King is off to a solid start with $1.7M after showtimes that began at 3 p.m. Thursday at 3,271 venues. The $50M feature co-financed by TriStar and eOne is expected to make between $13M-$16M this weekend after a very warmly received premiere at TIFF last Friday, and Rotten Tomatoes critic reviews that had hovered at 100% now have now settled to a still-great 94%.

Sony was eyeing Harriet and Widows, the latter a Davis action crime movie, as comps, and already Woman King has beaten both those pics’ respective $600K Thursday previews by 183%. The Woman King expands to 3,675 theaters this weekend, and the hope is that those excellent reviews will pull in adults at a time when there’s not much on the marquee.

A24 also has the Ti West horror installment Pearl going wide at 2,900 theaters. The movie starring and co-written by Mia Goth is expected to open in the neighborhood of its previous chapter, X, which was $4M.

Searchlight is going wide on the mystery comedy See How They Run starring Sam Rockwell and Saoirse Ronan in 2,404 theaters. Searchlight is expecting to $1M-$3M. It’s at 72% on Rotten Tomatoes.

Among regular ranked titles on Thursday, Disney/20th Century Studios’ horror movie The Barbarian made $773K at 2,340 theaters, -18% from Wednesday, for a week’s take of $14.6M. Zach Cregger’s acclaimed movie is expected to bring in a second weekend around $4.5M.

Lionsgate’s Clerks III made $275K, +62% from Wednesday for a week’s take since Tuesday of $1.5M at 1,089 locations. The Kevin Smith-directed sequel will continue to play throughout the weekend.

Bullet Train and Top Gun: Maverick were fourth and fifth on Thursday with $267K and $274K, respectively. Now at 3,056 theaters, Bullet Train‘s domestic total through six weeks stands at $93.9M, while Maverick counts $706.8M at the end of its 16th week.