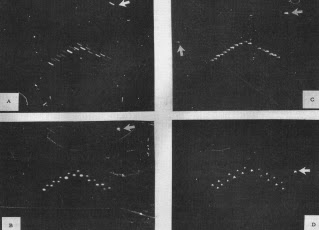 Tennessee Republican
Congressional Representative Tim Burchett, who won reelection on Tuesday, November
8, said recently that the UAP report that had been scheduled for release on
October 31 but was delayed, will be a whitewash. He said that those in charge
believe that we’re too stupid to handle the truth about alien visitors.

He said leaks suggested
that 366 cases of UFO, I mean UAP, sightings would be explained. He also said
that the report makes it clear that these sightings are of terrestrial objects
rather than alien visitation. The sightings are the result of foreign drones
and weather balloons. While drones are a new wrinkle, the weather balloon
explanation has served the government well, used to explain everything from the
Roswell crash to Gorman dog fight with a UFO. Of course, the balloon
explanation fails for Roswell but that’s another story that will come soon.

Burchett said it was
all about power. This is a reason for the continued cover up that I explored in
depth in UFOs and the Deep State. Those in power feared their power
would be diminished if the truth came out. In Washington, it’s all about the
power and the financial rewards of that power.

History has provided us
with examples of how that works and while overt conquest in not necessarily the
problem, it is the introduction of a superior technology that can result in a
shift of power. A rifle is a superior weapon to a bow and arrow, but it takes a
manufacturing base to create and a supply system to produce the ammunition.
Once the rifle is adopted as the weapon of choice, those who had relied on bows
and arrows, which could be made by the individual, were now at the mercy of
those who had the ability to manufacture the rifle. Their society was radically
altered by that superior technology and the desire to have the latest and the
best.

Of course, government
officials have said that there are national security implications which are the
umbrella used to bury the truth. Some times that is the truth, but more often
than not it is a simple excuse for refusing to answer questions.

Republican Marco Rubio,
has also called for the release of the information. He said that one of the
explanations offered was “airborne clutter” and that investigators found no
evidence of extraterrestrial life or, and I stress this, a technological
advancement by a foreign foe, meaning Russia or China. Yet, hints in the new
report suggest China and others are using drones to surveil our military
exercises are a solution, which negates the denial of technological advancement.

But Congressional
interest doesn’t translate into governmental action. After a series of
sightings in Michigan in 1966, then Congressman Gerald Ford called for a
Congressional investigation. The hearings, that lasted for a day, resulted in
no known action on the part of the government or the Air Force. In the end, the
official conclusion about the sightings by the officers of Project Blue Book
was, yes, you remember, “Swamp Gas.”

While swamp gas might
have explained a sighting or two, it did not cover the range of sightings by
multiple witnesses in multiple locations. The Air Force conclusion of swamp gas
remains as the explanation for the sightings. The Congressional influence did
nothing to advance the investigation into UFOs, only suggested that there was
nothing of importance to be learned and that only the uneducated and the
unsophisticated reported UFOs.

What most people are
missing here, in this latest round of Congressional interest, is that we had
men running for federal office who were advocating research into UFO sightings
and suggesting the government has been less than candid without journalist
questions about the overall situation. There were no consequences for their
opinions about UFOs or for the government lack of candor in answering those
questions.

Remember Democrat Dennis
Kucinich. He was making a run for the presidential nomination some fifteen
years ago. Fox News reported, “Dennis Kucinich’s UFO Comments Prove He’s Nuts.”
At least in today’s environment, those suggesting there is something to UFO
reports aren’t dismissed as nuts. The news media seems to have softened their
view but I fear the outcome will be the same. In other words, there will be
some sympathetic press and then everyone will forget about the UFOs, or as they
are now called UAPs.

One of the real
problems it that they make no plans to review the history of UFOs. There have
been many good cases with independent witnesses and multiple chains of
evidence. Too often these sightings have been rejected because we all know
there is no such thing as alien visitation. The Lubbock Lights from 1951 are
rejected as birds, even with witness statements that suggest a craft and four
photographs of them. The debunkers are now saying that the pictures are faked,
but I talked to the photographer more forty years after the fact. He told me then
that he still doesn’t know what he photographed. In so many cases of faked
photos, the photographers have eventually come clean and admitted the hoax.

There are the
Washington National sightings of July 1952 with multiple pilots, both civilian
and military reporting the objects. Radar sightings on multiple radars. And the
official conclusion is temperature inversion.

Of course, the
Levelland sightings of 1957 that was ball lightning. The Socorro landing of
1964 that some believe was a lunar lander suspended under a helicopter but no
record of such a test at nearby White Sands at the proper time. The Michigan
sightings, mentioned above that were labeled as swamp gas.

And since the end of
“official” investigations, there have been good sightings that were belittled
and categorized so that we don’t have to deal with them. Rendlesham Forest and
the Cash-Landrum personal injury cases from December 1980 spring to mind here.

And, good reports being
made today with calls for investigation but with no one wanting to review UFO
history. These new investigators will be condemned to making the same mistakes
because they won’t know what happened in the past. And in some cases, are
refusing to even consider past sightings for reasons that are not viable.

The only upside for all
this is that those calling for renewed investigations in the world today are
not ridiculed as “nuts.” We do have some serious people who want serious investigation,
but given the history, some of it briefly outlined here, I have little hope
that we’ll have either an unbiased or scientific investigation. I believe that
we are doomed to more of the same given the missed deadlines and the leaked
information that we have seen recently.

Shania Twain Marks 25th Anniversary of ‘Come On Over’ With Elton John, Chris Martin Duets
I Must Remember That a Story Can Be Eaten Like a Body
The Milk Carton Kids Announce New Album, Share ‘When You’re Gone’
‘Gone Girl’ Actress Lisa Banes’ Killer Gets One to Three Year Sentence
Weird Nightmare Covers The Troggs’ ‘Our Love Will Still Be There’