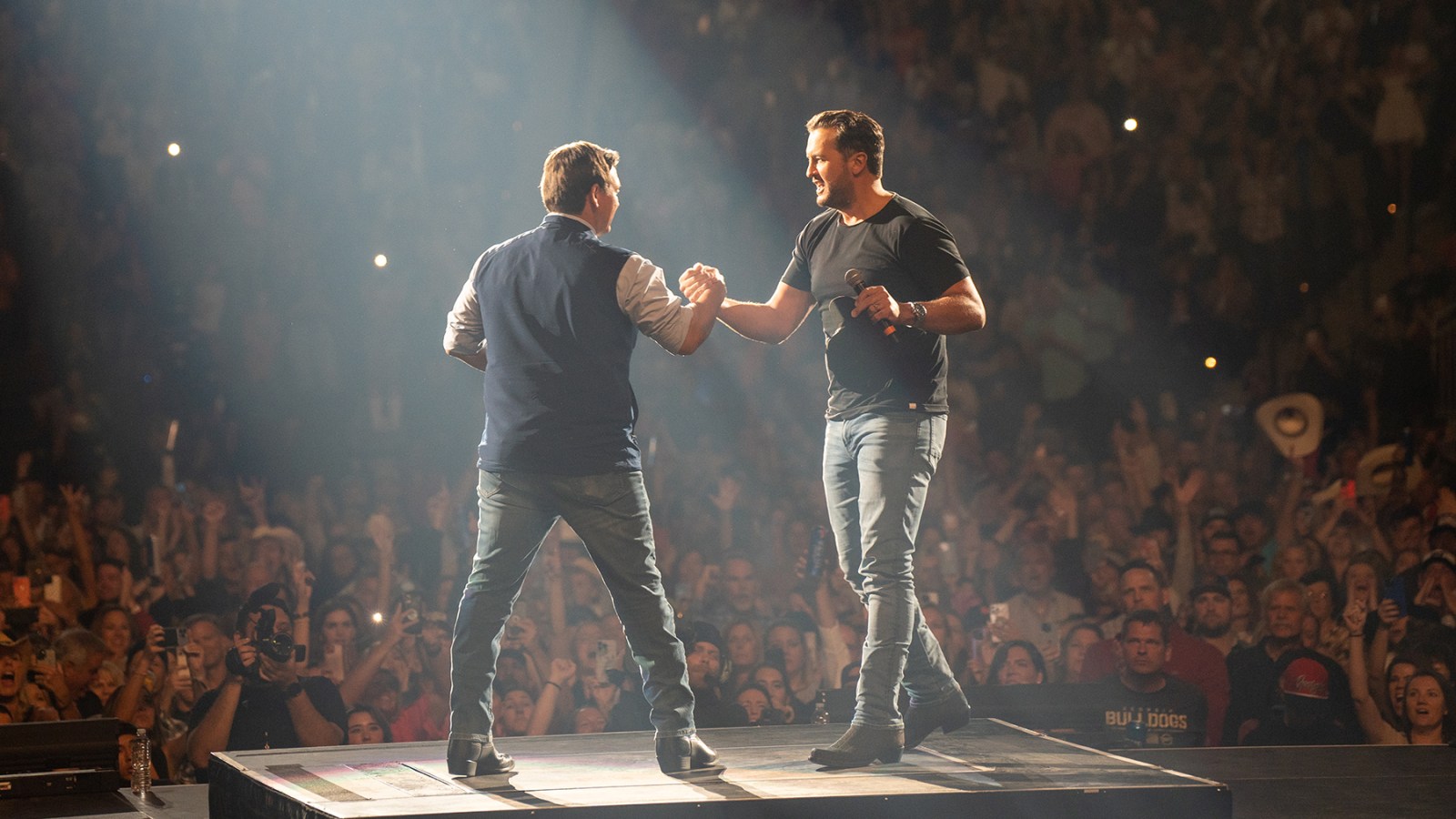 Late last month, Luke Bryan surprised fans with a special guest at the Jacksonville, Florida, stop on his Raised Up Right Tour. It wasn’t one of Bryan’s country music peers, but a politician with presidential dreams: Florida governor Ron DeSantis.

Walking onstage to pre-recorded music and tossing merch into the crowd, DeSantis treated the cameo like a campaign appearance ahead of the November midterms. “Hello, Jacksonville. Are you excited to be in the free state of Florida?” he asked. “All you Florida voters, if you want to keep the state of Florida free, we need you to vote on November 8.” Chants of “U-S-A! U-S-A!” broke out and then Bryan revealed the reason for DeSantis’ appearance.

The country star announced that he was donating “a large portion of the proceeds” from a Nov. 2 concert in Estero, Florida — a city hit hard in September by Hurricane Ian — to the Florida Disaster Fund. The crowd roared, Bryan gag-gifted DeSantis a Georgia Bulldogs jersey, the Florida Gators’ rival, and the pair hugged. Two weeks later, DeSantis cruised to a landslide reelection victory as Florida’s governor.

Bryan, meanwhile, had to fend off an onslaught of criticism for hosting a Republican governor who has used migrants as political stunts and introduced legislation that targets queer youth. In a rare statement, the country singer and American Idol judge addressed the backlash on social media. “I understand Governor DeSantis is a very polarizing figure. But I grew up in a country where if a governor ask you if they can come and raise awareness to help victims of a natural disaster you help,” Bryan wrote in part. It “felt right,” he added. “This is all I am saying about this.”

Bryan’s defense, that the appearance of DeSantis was for a good cause, is the latest example of how country music artists can wade into politics by invoking charity.

Earlier this year, Maren Morris and Brittany Aldean, the wife of country star Jason Aldean, got into an online spat over the issue of transgender youth healthcare. Over several posts, Aldean mischaracterized the healthcare available to transgender adolescents as “genital mutilation” and incorrectly referred to the idea of a transgender teenager transitioning as having parents “changing” their child’s gender. Morris publicly reaffirmed her support for marginalized transgender youth and referred to Aldean as “Insurrection Barbie.”

Both ended up selling merchandise to raise money for their respective charities. Morris sold a t-shirt inspired by a Tucker Carlson insult (he described her on-air as a “lunatic” during an interview with Brittany Aldean) and raised over $150,000 for GLAAD’s Transgender Media Program and a hotline for transgender youth in need. Aldean, meanwhile, marketed and modeled a clothing line that read “Don’t Tread on Our Kids” to raise money for Operation Light Shine, a non-profit that, according to its website, was formed to “combat the growing epidemic of Child Exploitation and Human Trafficking.” The Aldeans raised over $100,000 for the organization, which combats child trafficking, a talking point among conservatives and, especially, the far right. The 2016 Pizzagate conspiracy theory was based on the outrageous notion that some Democrats were running a child-sex ring out of a Washington, D.C., pizza parlor. (Aldean once advertised a t-shirt for kids that read “Hidin’ from Biden.”)

“Increasingly, [entertainers] have been associating with charities to make them look good, because that’s been the neutral-ish way to make yourself seem like a well-rounded human being,” says Mark Harvey, professor and author of Celebrity Influence: Politics, Persuasion and Issue-Based Advocacy. “But social media and the increasingly polarization of politics has changed that. Whereas country music may be fairly conservative, and I mean conservative in terms of not wanting anybody to speak out, social media and growing politics have been pushing in the opposite direction.”

Country singers like John Rich have overtly name-dropped charities while espousing partisan politics. In 2021, Rich made a bet with Nashville journalist (and Rolling Stone contributor) Adam Gold: The “Save a Horse (Ride a Cowboy)” singer wagered a $10,000 donation to his charity of choice that Donald Trump would somehow assume the presidency despite having already lost the election to Joe Biden. After he inevitably lost, Rich donated the money to Folds of Honor, a legitimate and lauded non-profit that provides educational scholarships to the families of U.S. military killed or disable while serving. It was a bad bet tied to a good cause.

“Artists more and more are starting to show their colors in terms of are they red or are they blue, which, back in the day, was still a very big risk,” says Christopher King, president emeritus of Folds of Honor’s Tennessee chapter. But King is emphatic when explaining that the work his organization does spans the political divide, both internally and for the population it serves. “The bullet doesn’t really care [about politics],” King says. “I think a lot of people would try to politicize [Folds of Honor]. I hope that doesn’t happen.”

According to Lucia Folk, CEO of the Change Agent-cy, which helps pair artists and corporations with well-fitting charitable causes, country music has always shared a close relationship with philanthropy and charitable work. She says that’s true now more than ever. “The world is pushing for more transparency, and fans expect the artists and the brands that they interact with to support causes such as social justice and environmental sustainability. Using your platform to highlight a cause that is important to you is a really great way to use your voice,” Folk says. But she adds, “To be a true charity you shouldn’t be political, you should be non-partisan.”

Both Folk and King push back against the suggestion that Bryan — whose other charitable endeavors include Feeding America, providing scholarships to farming communities, and supporting veterans with his E3 Ranch Foundation — intended to make a partisan statement in bringing DeSantis onstage in Florida. But they agree that DeSantis may have had motives aside from promoting the state’s disaster relief fund.

“If it had been a Democratic governor, I don’t think [Bryan] would’ve had any problem with that,” King says. “Is it opportunistic for a politician to take advantage of that? Maybe.”

“Was the decision to have the governor who is obviously in the news for all sorts of ridiculousness the best idea? I don’t know,” Folk says. “I think [Bryan] was trying to do the right thing, and right now doing the right thing is tricky, because people take advantage of it. He wanted to raise money for hurricane victims, and unfortunately, Ron DeSantis does what he does and took advantage of the opportunity.”

Regardless of the intention, Tony Morrison, GLAAD’s senior director of communications, says the governor’s cameo was a mistake that can’t be explained away. “Yikes sorry @lukebryan, there are no ‘buts’ in situations like this,” he tweeted in response to Bryan’s statement. In an email to Rolling Stone, Morrison said, “Many fans in the LGBTQ community, especially LGBTQ Floridians like myself, were disappointed with the appearance. Gov. DeSantis continues to cause immense harm to LGBTQ youth in Florida and across the country, using his office, influence and power to spread misinformation and harm LGBTQ people.”

Whether or not Bryan knew of the political statement he was making in inviting DeSantis on-stage, it’s clear that he felt the need to explain his decision to his fans, both those in the country music world and those who watch him on American Idol.

“The entire reason this is a running story isn’t the fact that DeSantis showed up onstage; It’s the fact that his fans are upset,” Harvey says. “The fact that he had to [release a statement] says something about the mismatch of all this, and it’s a reminder, too, that when celebrities go out on a limb for a politician, it’s more inclined to hurt the celebrity than the politician.”