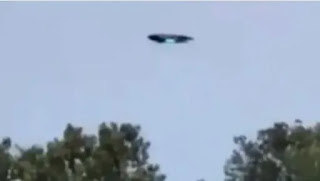 While it its no longer a mystery that we are not alone in the galaxy and that UFO sightings are increasingly more frequent around the world, a situation of this kind can still cause a commotion, as occurred in the locality of Trelew [in the province of] Chubut.

On Saturday afternoon, a group of taxi cab drivers witnessed an Unidentified Flying Object (UFO) over the skies of that locality. As is often the case, they documented the event and shared it on social media.

The event occurred over Plaza Independencia, one of the city’s main parks, when the intruder peered over the treetops. It drew the attention of cab drivers, first, and then that of local residents strolling through the public area.

“I thought it was a drone,” said Alejandro Biaggio, a Trelew cab driver for some 40 years. In describing the most salient characteristics of the object, Biaggio stated that “when the object flew behind the church’s belfry, we realized that it was very large.”

The fact is that the fistful of people lucky enough to see the craft were able to take photos with their mobile phones, which quickly went viral online with statements pro and con.

[Translation (c)2023 Inexplicata with thanks to Santiago Altamirano]