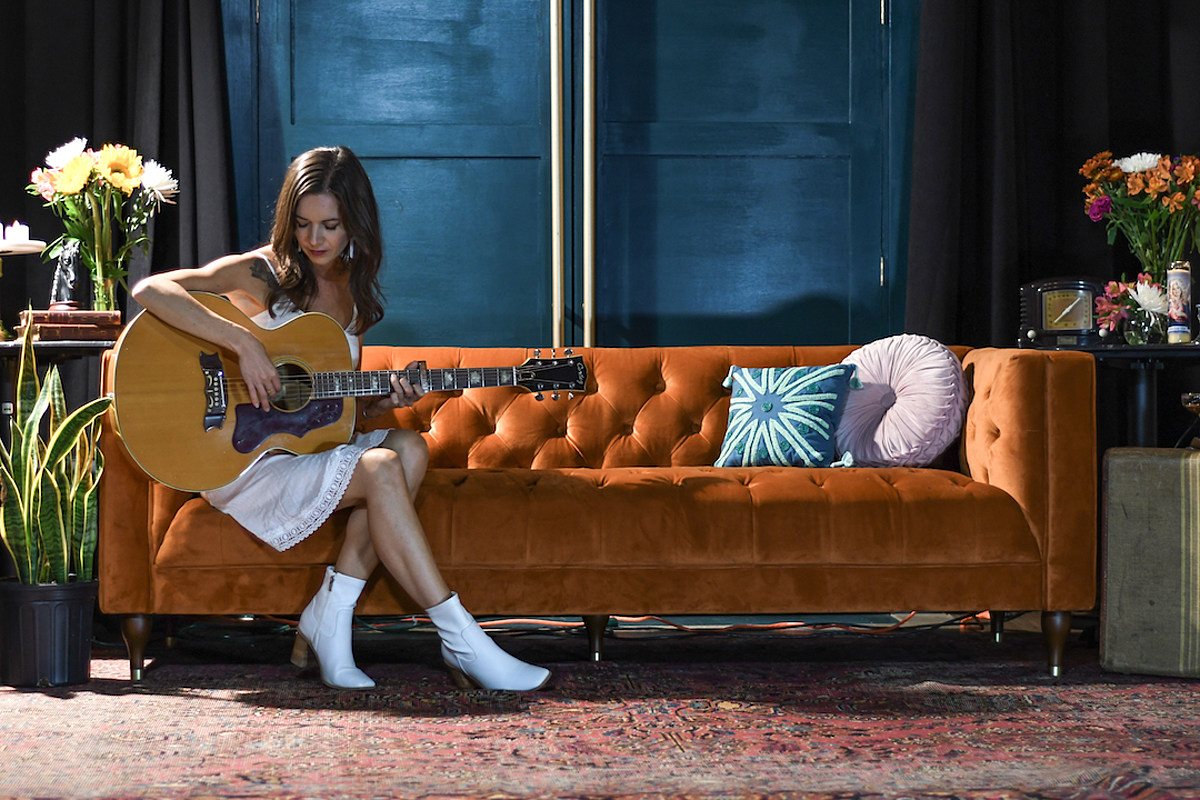 Karen Jonas weaves an irresistible rhythm on her new song, “Rock the Boat.” It’s a gothic swirl of liberation and possible menace, an inexorable pull of tides as the narrator urges us to swim against them. The track is just the first taste of her sixth album, The Restless, out on March 3.

“The record tells a story, but it isn’t linear,” Jonas says. “There are throughlines: this collection of dreamy, raw, romantic, and ill-fated stories. It’s important to me that the songs don’t judge the stories, they just dig in, leaving you to draw your own conclusions.”

“Rock the Boat” sets the tone with its snarling drama and recklessness. “Sometimes it’s hard to unpack where the narrator and I begin and end,” Jonas reflects.

In spite of the track’s intensity, it calls to mind Jonas’s role model Joni Mitchell. Listening to Mitchell off her father’s turntable inspired her to be a musician, and “Rock the Boat” exhibits a sense of deeply felt lyrics and world-building, much like Jonas’s indirect mentor.

“I wrote ‘Rock the Boat’ when I was in a tough spot and feeling particularly disconnected and isolated,” Jonas reveals to The Boot. ”I envisioned a woman running through a forest to a river, escaping a world that doesn’t understand or support her. My repetitive fingerpicking anchors the melody while the rest of the arrangement billows, crashes, and rumbles.”

Listen to “Rock the Boat,” which is premiering exclusively at The Boot today (Jan. 18), below:

If “Rock the Boat” feels well-crafted, that’s because it and the rest of the album were recorded over an 8-month span in between tours. Jonas and her band, long-time guitarist and music partner Tim Bray, bassist and co-producer Seth Morrissey, drummer Seth Brown, and multi-instrumentalist Jay Starling want to create a dense, organic sound.

“I’m glad we took our time on this record,” says Jonas. “I needed to listen and reflect. Last year I wrote a book of poems called Gumballs with the help of my best friend, editor and lyrical co-writer, Andie Burke. It was cathartic and confessional, and I wanted to bring that energy to this album. Andie, Seth Morrissey, and I worked as a team to get comfortable with these stories and bring them to life.”

Jonas and her band, who seemingly tour non-stop, were named Best Country/Americana artist by the Washington (D.C.) Area Music Awards three times, featured at SXSW and UK AmericanaFest, and nominated for an Ameripolitan Award.

You can find a complete of upcoming tour dates at Karen Jonas’ official website.

Billy Strings is one of those once-in-a-generation artists who revitalize their genre with the scope of their talent and original perspective.

While to some, it may have seemed like Strings appeared on the bluegrass scene suddenly, his connection to the genre was far from new. Strings began playing guitar at five years old, thanks to the influence of his father, Terry Barber. Strings learned the bluegrass songs that were the soundtrack to his rowdy family’s life, along with metal and classic rock favorites.

Born and raised in a small town in Michigan, Strings’ childhood was marked by difficult losses and hard times as his parents struggled with meth addiction. As a young adult, Strings dealt with his own addiction issues but was later able to find sobriety.

From 2016 to 2022, Strings released one EP and four albums. Two of his records, 2019’s Home and 2021’s Renewal, have been nominated for Grammy Awards, with Home earning the top prize. He has also won an Americana Music Award and numerous International Bluegrass Music Awards, among other significant accolades.

At the young age of 30, Strings has created a remarkable legacy, and we can’t wait to see where he goes from here.

All of Randy Travis’ Albums, Ranked

From his 1986 debut to today, The Boot ranks Randy Travis’ entire career catalog of studio albums.