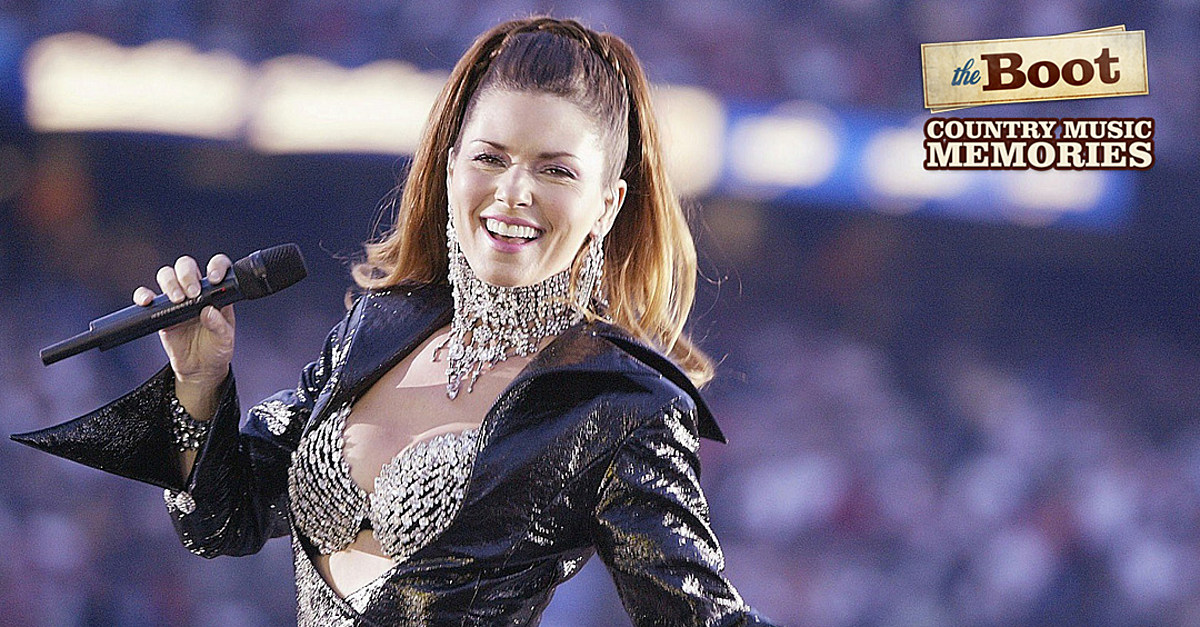 On Jan. 26, 2003 — 19 years ago today — country music made its biggest showing in years at the NFL’s most high-profile game. At Super Bowl XXXVII, at Qualcomm Stadium in San Diego, Calif., the Dixie Chicks (now the Chicks) sang the National Anthem, and Shania Twain was a halftime show headliner.

Prior to 2003, the only country artists chosen to sing the Anthem at the Super Bowl were Charley Pride (1974), Garth Brooks (1993) and Faith Hill (2000). But the Chicks were flawless: Natalie Maines kicked off “The Star-Spangled Banner” solo, singing “Oh, say, can you see …” in a clear voice. Starting with the next line — “… by the dawn’s early light” — bandmates Emily Robison and Martie Maguire joined in, their voices branching off to create three-part harmonies.

This particular arrangement of the National Anthem was lovely, and clearly scored to highlight the Chicks’ vocal strengths. Gathered around one microphone, the trio’s members were solemn and reverential, their voices dipping and soaring in rhythm with the lyrical imagery. As the song crested to its apex — “Oh, say, does that star-spangled banner yet wave / O’er the land of the free / And the home of the brave” — their voices strengthened and grew louder, and the performance ended on a dime.

Twain, meanwhile, was in the enviable position of kicking off 2003’s Super Bowl halftime show, which also featured Sting and No Doubt. With a shout of “Let’s go, football fans!” she strutted onto a small circular stage and launched into a rocked-up version of “Man! I Feel Like a Woman!” Backed by an army of musicians, she exuded a take-charge presence: Her outfit was commanding — a floor-length black duster, thigh-high boots, a jewel-encrusted bra and a black miniskirt — and her gesticulations were defiant and confident.

After “Man!,” Twain segued into a hard-edged version of her then-single, “Up!” In a nod to the song’s buoyant chorus, she took a looser approach to her performance: Twain walked down an attached walkway perpendicular to the stage and high-fived with crowd members, and then huddled with her bandmates, mugging for the camera. Appropriately, as the song ended, she stepped onto a platform that was then elevated and rotated above the crowd via a crane.

Incredibly, Twain was the last country artist to perform during the Super Bowl halftime show to date; in fact, her appearance was rivaled only by the 1994 all-country halftime show lineup of Clint Black, Tanya Tucker, Travis Tritt and the Judds. Anthem-wise, since the Chicks, only Carrie Underwood (2010) and Luke Bryan (2017) have done the honors, though Eric Church will sing it with Jazmine Sullivan in 2021. Country stars have been tapped to perform “America, the Beautiful” at the game, however: In 2009, Faith Hill did the song justice, while then-couple and Blake Shelton and Miranda Lambert sang it in 2012.

Oh, and as for the game? The Tampa Bay Buccaneers beat the Oakland Raiders, 48-21.

Country Stars Who Have Performed During the Super Bowl: