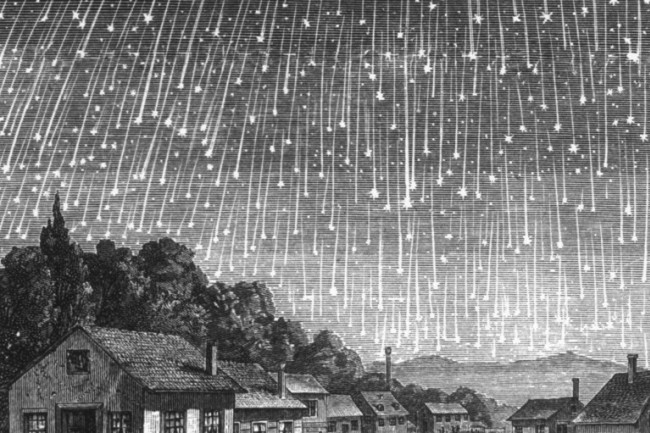 There are plenty of unusual theories over the origin of SARS-CoV-2, the virus responsible for COVID-19. From claims that the virus is a bioweapon, to the idea that 5G transmissions are behind the pandemic, there’s been no shortage of hard-to-believe ideas.

But there’s one COVID-19 theory so remarkable that it makes the others look boring by comparison: The proposal that the coronavirus came from space.

In this post, I’ll discuss this wonderfully strange idea and its equally strange history.

The space virus theory has been the work of a group of researchers, notably Edward J. Steele and N. Chandra Wickramasinghe. This group has published ten papers on the topic since the pandemic began, but this paper from July 14th offers the most detailed argument.

Steele et al. suggest that COVID-19 arrived on a meteor which was spotted as a bright fireball over the city of Songyuan in North East China on October 11, 2019.

They propose that the meteor might have been “a fragile and loosely held carbonaceous meteorite carrying a cargo of trillions of viruses/bacteria and other primary source cells.”

The authors admit that the Songyuan meteor was spotted over 2,000 km northeast of Wuhan, where the first cases of COVID-19 were reported, but they deal with this discrepancy with the hypothesis that a different fragment of the meteor arrived in the Wuhan area:

A much larger original meteoroid could easily have been fragmenting and dispersing its contents before the ignition of the fireball event. A reasonable assumption is that the fireball which struck 2,000 km north of Wuhan may have been part of a wide tube of debris the bulk of which was deposited in the stratosphere to fall over Wuhan.

Needless to say, this is not a theory with any evidence for it. There is no evidence that viruses or bacteria (or any other life) exist in space, and Steele et al. provide no direct evidence that the coronavirus arrived from the heavens.

But it turns out that the theory of life (and disease) from space isn’t new. The theory is called panspermia and a handful of researchers, including Steele and Wickramasinghe, have been advocating it for decades.

Panspermia is, broadly speaking, the idea that life arrived on earth from space, and continues to do. The notion goes all the way back to the ancient Greeks, but in its modern form it dates back to the 1970s and the work of two astronomers, Fred Hoyle (1915-2001) and Chandra Wickramasinghe.

Hoyle was a renowned astronomer involved in many controversies over the course of his career. He is perhaps best known for coming up with the term “Big Bang” — although, unlike the vast majority of his colleagues, he never accepted the validity of the Big Bang theory. Wickramasinghe was Hoyle’s doctoral student.

As they tell the story, Hoyle and Wickramasinghe conceived of panspermia while trying to explain the way in which interstellar dust absorbs light. They noticed that if the dust were composed of bacteria, this would produce the observed pattern of light absorption.

Hoyle and Wickramasinghe eventually arrived at the idea of a galaxy absolutely full of microorganisms, present in comets and meteors as well as dust clouds. 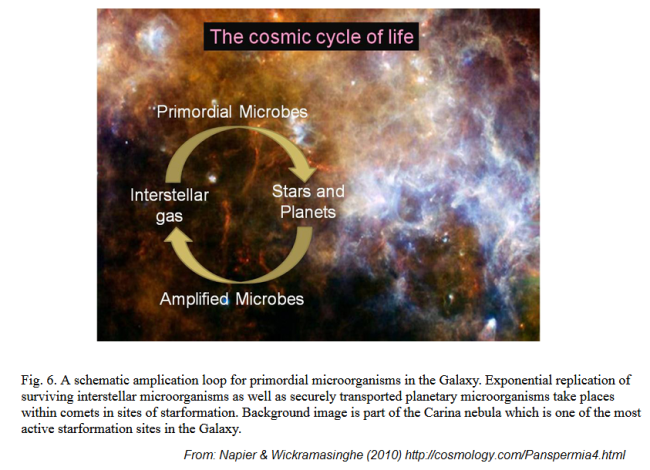 Diagram of “amplication loop for primordial microorganisms in the galaxy.” (Credit: Napier & Wickramasinghe 2010 Journal of Cosmology)

While organisms in deep space could not be alive per se, Hoyle and Wickramasinghe believed that space microorganisms might be able to reactivate if they arrived at a suitable planet, like Earth — and perhaps infect the native creatures, humans included.

All the way back in 1979, Hoyle and Wickramasinghe wrote of “Diseases from Space,” as the title of one of their books put it. They went on to suggest an interplanetary origin for several outbreaks, including the original SARS in 2003 and influenza.

I find the idea of a galaxy awash with life fascinating. I don’t believe it, and panspermia is rejected by the great majority of scientists, but it was certainly a bold and creative idea. It may not be fact, but at worst, it’s good science fiction.

However, the recent attempts to explain COVID-19 as coming from space strikes me as much less interesting — and potentially dangerous.

COVID-from-space is not an interesting hypothesis. The theory is clearly just an attempt to make COVID-19 fit into the existing panspermia model — there’s nothing new or creative about that.

To be honest, even if you believe in panspermia, I can’t see why you would think that COVID-19 came from space. The SARS-CoV-2 virus is not some weird, alien pathogen. It’s extremely similar to the first SARS virus, and to various mammal coronaviruses, especially bat ones. So even if you believe in space viruses, this is one virus that clearly has an Earth origin.

COVID-from-space is also a dangerous hypothesis. Steele, Wickramasinghe et al. have suggested that COVID-19 is not contagious from person to person (or only rarely). Based on this belief, they suggested (in February) that COVID-19 would mainly affect China, and that it would disappear once the dust dispersed. They further wrote that there was no point in searching for a vaccine:

Thus, development of a so called “COVID-19 vaccine” which is much in the news at the time of writing would be a waste of public tax-payer funds if mounted on the scale envisaged by governments and national centers for disease control.

It’s clear that if anyone took this idea seriously, it would be very dangerous to public health; fortunately, I don’t think anyone does.

I would say, though, that the coronavirus-from-space theory is still more plausible than some other theories of COVID-19. Believing that coronavirus is caused by 5G transmissions, for instance, makes even less scientific sense than believing it arrived on a meteor. A meteor could, in theory, carry a virus, but radio waves can’t.