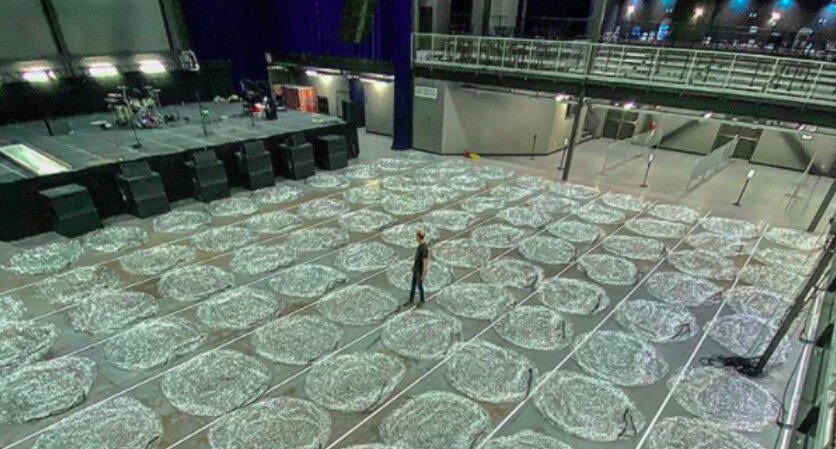 The Flaming Lips are planning a concert in their hometown of Oklahoma City where each audience member will be enclosed in a giant bubble, frontman Wayne Coyne has told Brooklyn Vegan and JamBase.

“I mean, it seems absurd, but we at first were just doing it as not a joke, but just as a kind of funny thing, and now it’s becoming kind of serious and real,” Coyne told BrooklynVegan’s Bill Pearis. “We’re starting to get ready to do an actual show where yeah, there’s three people in each of these space bubbles, and we play… We think maybe playing two shows a night, and getting a big audience in there each time.”

Coyne continued: “The place that we’re at at the moment, it holds almost 4,000 people, but it only holds a hundred space bubbles. So it’s a lot of space in there […] You fill them up and people can be in them for quite a while. I don’t think people quite realize that. Since we have some here, we’ve played with them and messed with them for quite a while. I mean, even back in 2006, I would get in one of the space bubbles at the end of our big Halloween parade here, and I would walk down the street for almost an hour in one.”

Speaking with Andrew Buss in an interview with JamBase, Wayne Coyne further explained: “We don’t want this to be [a super spreader event] like that Smash Mouth [concert]. We want this to be safe and a great experience. Those are the things the venue is allowing us to set up so we can start to figure out how it will work. The part about playing in the bubble, we already have down. It’s how we get the crowd in and out without cross-contamination that we need to figure out, but they’re giving us a few weeks in this venue to figure it out.”

Earlier this year, The Flaming Lips performed on Colbert to a small bubbled audience, a concept they also implemented for the video of their American Head track ‘Dinosaurs on the Mountain’.