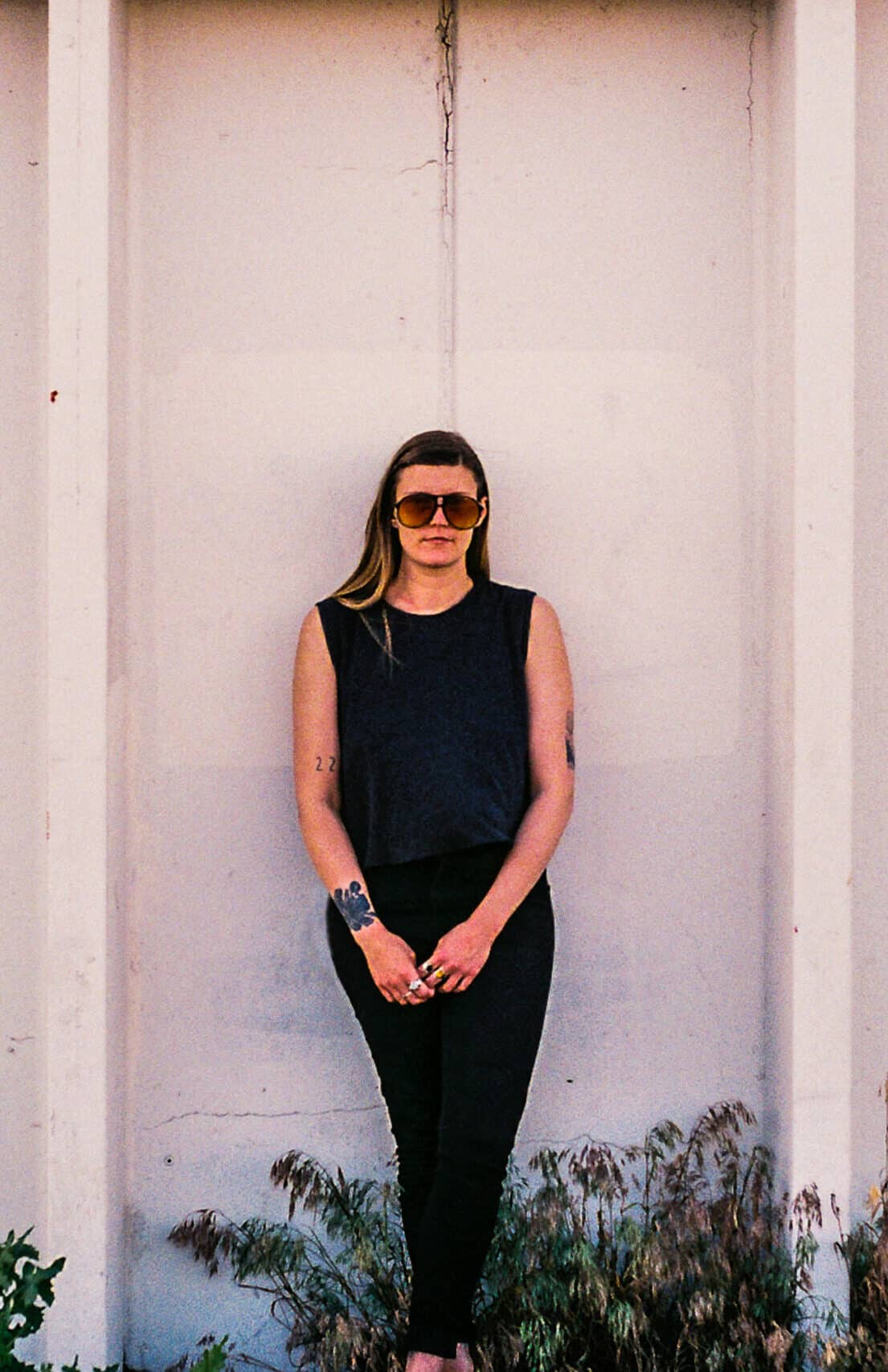 Midwife is the moniker of New Mexico-based multi-instrumentalist Madeline Johnston, who describes her music – an intimate and hypnotic blend of shoegaze, ambient, and slowcore – as “heaven metal”. A self-taught guitarist and producer originally from Denver, Colorado, Johnston has spent the better part of the past decade developing her experimental project, finding her footing as a musician while living at Rhincoeropolis, the former artist co-op that housed 15 of the city’s local musicians. When Rhincoeropolis closed its doors due to fears surrounding the safety of DIY spaces, Johnston and her close friend Colin Ward were among the 15 residents who were displaced. Ward passed away unexpectedly a little over a year later, and Johnston’s second album as Midwife, 2020’s Forever, is a profound meditation on grief and the impermanence of life.

Today, Johnston has followed it up with her third LP, Luminol, which was written and recorded during quarantine and features contributions from DIIV’s Zachary Cole Smith, Have a Nice Life’s Dan Barrett, Vyva Melinkolya’s Angel Diaz, and Tucker Theodore. The album relishes in Midwife’s unique, internal soundscapes – gorgeously layered vocals, hypnagogic guitar, lush synths – while revolving around a lot of the same lyrical themes, but Johnston reorients those elements in such a way that the atmosphere feels palpably different, yet no less cathartic.

We caught up with Madeline Johnston over email for the latest edition of our Artist Spotlight interview series to talk about her headspace going into Luminol, the process of making the album, her cover of the Offspring’s ‘Gone Away’, and more.

There seems to be a thematic throughline from Forever to Luminol, particularly when it comes to grappling with notions of truth, loss, and self-perception. What was your headspace going into the new album compared to your previous efforts?

I didn’t realize this until just now, but I think all of my records are about grief. I don’t want to play out this cliche too much, but Luminol is about grieving the world as we know it. I think the headspace I was in was about reconnecting to my process, which I finally felt like I had the time and space to do. I had some major life transitions when I was going into the new album – and as I was reconnecting to my creative process, I was also reconnecting with myself – soul-searching.

Luminol is a chemical used by forensic investigators to detect trace amounts of blood at crime scenes. When and in what ways did you start to connect it to the album’s themes?

When I was at my lowest point, a friend told me “The wound is the place where the light enters you,” and this particularly resonated with me. The phrase became my guide, while at the same time simply reaffirming what I already knew. I wanted to use that as the album title, but it seemed too awkward and wordy. I was watching a lot of true crime and investigative forensic science documentaries, when I realized the idea of Luminol does the same thing in a symbolic way. It’s a truth-teller. When I was writing the album, I felt like I was examining evidence left behind of what used to be my life. I chose Luminol as a concept because it’s literally all about “shedding light,” revealing – and turning trial and tribulation into something illuminating.

Beyond any symbolic connotations, the use of luminol in law enforcement also relates to the way you discuss your relationship with the mind and the body on ‘God Is a Cop’ and ‘Enemy’ respectively. Why did using that kind of socially charged language feel right to you in that context?

Thank you for asking. This was all intentional, and how I was internalizing the social unrest going on surrounding the Black Lives Matter protests following the murder of George Floyd. Living in a police state was at the forefront of my mind. I was thinking a lot about where I exist within this context, how am I an ally? How am I an enemy? Is what I’m doing enough? Am I enough, and how can I be better? Using the socially charged language helped me orient myself in the cultural landscape of 2020. ‘Enemy’ was actually inspired by the I Ching hexagram The Army which I found to be incredibly relevant at this time – described by Liu Yiming as “the human body is like a country, and the mind is like the ruler.”

What prompted you to interpolate The Offspring’s ‘Gone Away’ for the track ‘2020’? What does it mean for you — as a self-described “heaven metal” artist — to sing the refrain “And it feels like heaven is so far away”?

There was such an outcry of support about my song ‘2018’ when Forever was released (right at the beginning of lockdown in the US last year), so many people said things like, it might as well be “get the fuck away from me, 2020” because it felt extremely relevant at the time. I knew I wanted to do a follow up about 2020 somehow. All the pieces fell together and I decided to cover The Offspring (I LOVE them). The lyrics perfectly described what I was going through during 2020: feeling forsaken by my higher power, and at my lowest low. It felt like heaven was so far away.

You wrote and recorded Luminol during quarantine. I know you also worked remotely with your collaborators for Forever, but in what ways was the recording process different on this album?

I think I put more hours into Luminol. I lost my service industry job which was a blessing in disguise, it allowed me to focus completely on making the record.

I made some different choices in Luminol’s instrumentation. It’s all very eclectic and was experimental for me to do something different on most of the songs. I can’t even describe them, because each track is totally unique from the others. The common thread however, is the vocals, and I set out to make a very vocal driven album. I put hours and hours into the vocal work alone, and have one-upped myself yet again in further developing my aesthetic.

What did you learn about yourself as a songwriter and multi-instrumentalist as a result of working on Luminol?

I was actually trying to unlearn certain reservations I have developed in my songwriting, and revert back to a place of trust in my creative process. I was returning to the idea of “First Thought, Best Thought,” an idea coined by Allen Ginsberg as a way of describing spontaneous and fearless truth-telling in writing. I think what I learned is about trusting myself and my initial ideas, without holding onto an idea of perfectionism that ultimately can destroy the magic of spontaneity and stream of consciousness.

The final track on the album is named after and references the famous Andrew Wyeth painting ‘Christina’s World’. What strikes me about it is not only the houses in the distance, but also this feeling of being stuck to the ground and unable to move, which comes into contrast with the idea of being “born to run” in ‘Promise Ring’. Why did you want this to be the closing image on Luminol?

That’s a really interesting connection that hadn’t crossed my mind. I always write about running. But it’s about running symbolically. Even though the imagery in ‘Christina’s World’ seems to be the opposite – crawling up the hill – thematically it’s about the same concept of trying to break free. Both ‘Promise Ring’ and ‘Christina’s World’ are about confinement and resilience. Resilience being the imagery I wanted to close out the record with.

The Olson House is depicted in numerous works of art by Wyeth, who developed a friendship with the family and remarked that he “just couldn’t stay away from there.” I’m interested in how this relates to the idea of home, which you’ve called an “obsession” in your work, and which is addressed on the song ‘Colorado’. What is your present understanding of home, and how did it inform the album?

The concept of home is a recurring theme in my work. This is primarily because I have an unstable concept of place, of belonging – belonging to something or somewhere is a lifelong path I’m trying to understand. Home is not only physical space, it’s emotional space as well.

For all intents and purposes, I moved back “home” last year to New Mexico, but I’m at home / I don’t feel at home. I don’t think I have a better understanding of it now…I feel home through connecting with other people, but I’m separated from them by physical distance.

‘Colorado’ was the first song I wrote for the album. I wrote it after my friend Andrew passed away from a drug overdose at the end of 2019. He was my college roommate and one of the first friends I made in Colorado ten+ years ago. In the song, I’m relating my experiences to his experiences of traveling the country and forming these profound relationships with people living all over the place, and at the same time having a really difficult time connecting with people in Colorado. But we always had each other. ‘Colorado’ is dedicated lovingly to Andrew Boeglin FKA William Seward Bonnie.

You’ve described “heaven metal” as a way of channeling painful emotions into a form of catharsis. Does this catharsis feel different with each release, and has writing and recording Luminol brought you a sense of clarity on the other end?

That’s what it was about: looking for a sense of clarity in the thick of uncertainty. Making Luminol was how I oriented myself last year – it gave me a purpose when I was really struggling, that in itself was a cathartic action and was super meaningful to me.

Heaven Metal and the symbolic catharsis I am describing is all about healing. I think of myself as a healer. Each release does feel cathartic in its own way, because I’m working with different emotions every time. Luminol feels like the most mature release so far, and I think it’s incredibly personal while being totally indistinct and universally relatable at the same time.

Are there any ongoing projects or future plans that you’re excited about and would like to share?

I’m writing and recording an EP with my collaborator and friend Angel Diaz (Vyva Melinkolya) for a side project we’re calling Orbweaver. I’m looking forward to getting together with her in a couple weeks to start working on it!

Midwife’s Luminol is out now via The Flenser.