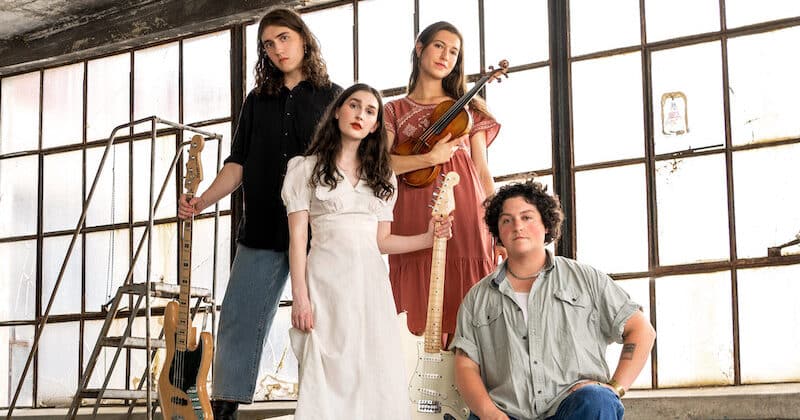 The Ophelias have shared a new song, ‘The Twilight Zone’, lifted from their upcoming album Crocus. The track arrives with an accompanying video, which you can check out below.

Vocalist/guitarist Spencer Peppet said of the new single and video in a statement:

‘The Twilight Zone’ was a song that grew in-studio. We recorded the basic tracks and I had an idea for a big outro. I knew I wanted horns on one song on this album, since I had been listening to and inspired by The Verlaines and Jay Som. I wrote the horn and additional strings parts at home, then brought them in and asked Peter Boylan (horns), Kate Wakefield (cello), Nina Payiatis (violin), and Anissa Pulcheon (viola) to play. It grew from there too – Coltan Foster added bassoon, which John and I were so excited about that we copied one of their later parts and pasted it into the intro. Andrea added the high, cinematic violins (and the midi boys choir, which sounds silly in concept but added the perfect texture!) and it was suddenly huge. It’s always a little strange to hear my words backed by a band, but this was extra surreal as it grew and grew. Lyrically, this song spans a long time. It’s been a couple years since I wrote it and things have changed even more since then.

We made the visualizer with our friend Andrew Skalak, using a technique they used in special effects before computers called a “cloud tank.” Everything in this video is done practically (meaning in-camera, in real life), nothing computer-generated. Andrew projected video of us through an aquarium and onto rippling fabric, which gave the images a refracted, unearthly feeling.

The Ophelias’ Crocus comes out September 24 via Joyful Noise. The band has already shared the album singles ‘Vapor’, ‘Sacrificial Lamb’, and the Julien Baker-featuring ‘Neil Young On High’.