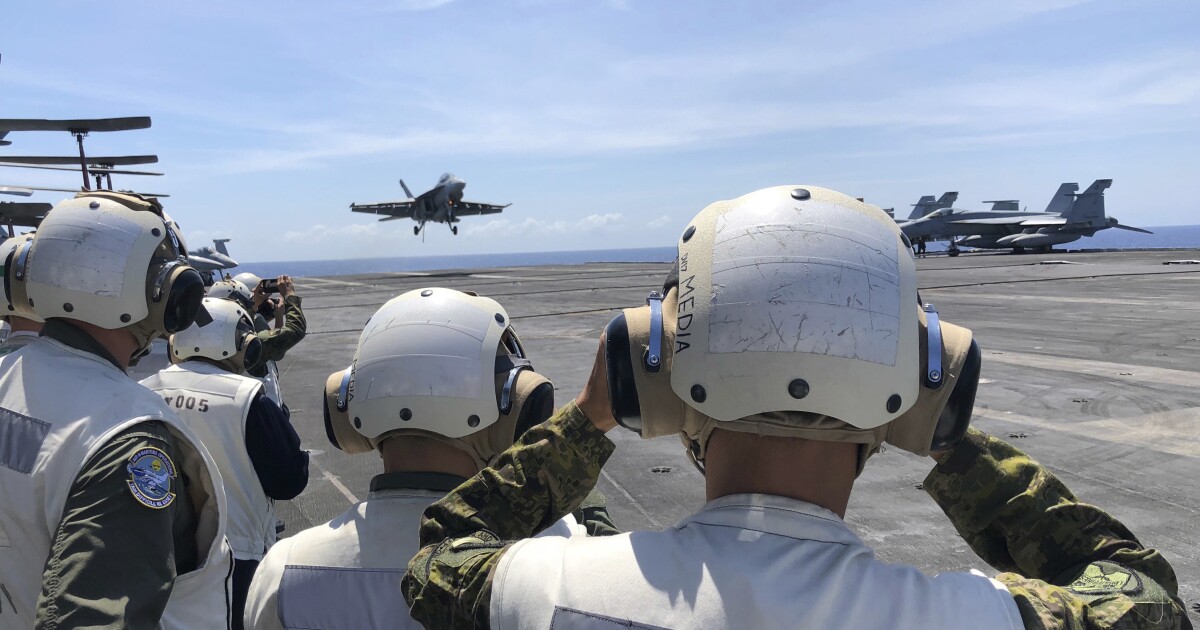 Adopting Sun Tzu’s mantra that “victorious warriors win first and then go to war,” the Defense Department has launched a preemptive strike on Congress. Specifically, a strike against congressional efforts to ramp up government research of UFOs (what the government refers to as “Unidentified Aerial Phenomena”).

On Tuesday, Deputy Defense Secretary Kathleen Hicks announced the formation of a group to lead the government’s UFO investigations. Attesting to the Pentagon’s affinity for absurd acronyms, the group will be called “AOIMSG.” The Airborne Object Identification and Management Synchronization Group will be supervised by the AOIMEXEC, or the Airborne Object Identification and Management Executive Council.

AOIMSG’s mission: “To synchronize efforts across the [Pentagon] and the broader U.S. government to detect, identify and attribute objects of interests in Special Use Airspace (SUA), and to assess and mitigate any associated threats to safety of flight and national security.”

This might sound like progress from a department that has spent much of the post-Second World War period saying UFOs are fictional. Unfortunately, it’s anything but that.

In reality, this is a deliberate and calculated effort to undermine bipartisan legislation moving through Congress. That legislation centers on Sen. Kirsten Gillibrand’s amendment to the 2022 Defense Act.

Now refiled with bipartisan support, Gillibrand’s amendment would significantly strengthen the government’s investigation of UFOs. Most notably, the legislation would do several things the AOIMSG ignores.

These include forming a well-resourced Anomaly Surveillance and Resolution Office, focusing on “transmedium” UFOs (which operate underwater, in the air, and in space) instead of the AOIMSG’s focus on only those in controlled “airspace.” The amendment would mandate an oversight committee that includes a range of nonmilitary experts and some civilian academics.

Congress would also mandate regular reporting, engagement with foreign allies, and a coordinated effort to research and possibly replicate UFO technologies. This seriousness matters because the most advanced UFOs are believed to be intelligently controlled vehicles of exotic propulsion, intent, and origin. As an extension, the United States better hope China and Russia don’t figure out how to build these UFOs first.

On that last point, Gillibrand’s amendment also includes an explicit requirement for the Pentagon to brief Congress on UFO incidents involving nuclear platforms.

As first documented by Robert Hastings, UFOs bear particular interest in the military’s nuclear platforms. They also saturate around high technology sites (such as those involving research into theoretical physics). The high number of UFO sightings by naval aviators operating off of U.S. aircraft carriers have been validated by the government (albeit classified in nature) as partly being a result of those platforms’ nuclear reactors .

The AOIMSG does none of these things. The AOIMEXEC supervising committee will be made up only of U.S. government personnel. Moreover, the Pentagon announcement only references a responsibility to investigate UFOs only in “special use areas” such as military flight areas. It ludicrously underplays the nuclear connection here, saying incursions in these areas “may pose national security challenges.” (You think?).

And, considering 70 years of effort to ignore and intimidate personnel who report UFO incidents, the Pentagon insists it takes reports of incursions “very seriously.” The CIA and Air Force are of particular concern here. I can report that both remain reluctant to undertake UFO-related research and reporting (the Debrief’s Tim McMillan has also reported on the Air Force concern). They are unlikely to alter their approach unless Congress enforces change.

Put simply, Congress should pretend as if Hicks’s announcement never happened. It should pass the Gillibrand amendment and compel real action.