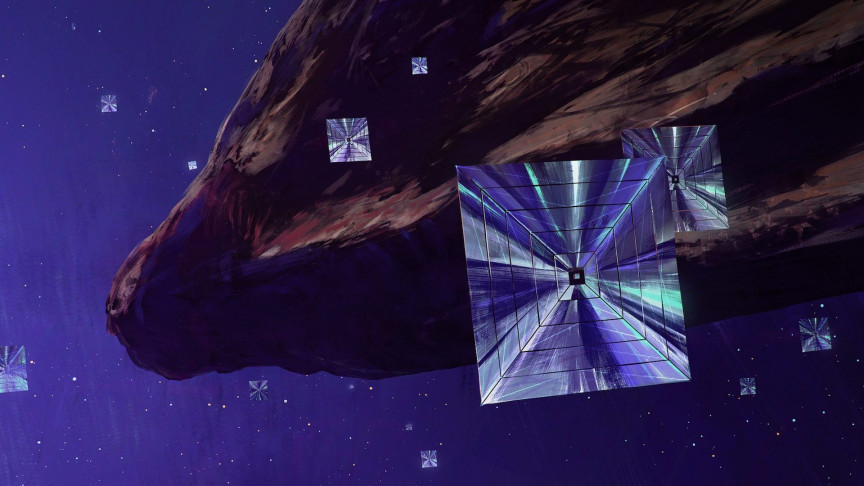 It’s the what-ifs that hurt the most.

‘Oumuamua, the first interstellar object to be observed in our Solar System, might be an alien spacecraft, but it could also be a cigar-shaped rock. If only it had hung around in our neck of the galaxy long enough for us to have figured it out.

While many in the scientific community are resigned to never finding out the true answer, one team has outlined an ambitious plan to send a probe to catch up with the mysterious space object as it travels farther and farther away from Earth, a report from Forbes reveals.

After ‘Oumuamua was discovered on October 19, 2017, by the Pan-STARRS1 Near-Earth Object survey, astronomers pointed out several anomalies that meant the object didn’t resemble other asteroids observed in our Solar System.

Shortly after ‘Oumuamua was first observed, for example, it changed speed, taking it off the initially predicted path. The strange object also left no trail of debris in its wake. An astrophysicist from Harvard, Professor Avi Loeb, and his team then famously suggested ‘Oumuamua was an interstellar alien spacecraft, or at least a piece of one.

Now, ‘Oumuamua is beyond the reach of our most powerful telescopes, but those discrepancies are just too intriguing not to follow up. That’s why a team from the Initiative for Interstellar Studies (I4IS) published a new paper outlining their plans for Project Lyra, a mission that would send a solar sail probe to catch up with and analyze ‘Oumuamua before it’s lost to us forever.

“Theories to explain the nature of 1I/’Oumuamua have included a fractal dust aggregate, a hydrogen iceberg, a nitrogen iceberg, an alien solar sail, fragments of a tidally disrupted planet, and so on,” the authors of the paper wrote. “All explanations have one feature in common — they are extraordinary.”

A solar sail mission with a gravity boost from Jupiter

The new paper says a mission could launch in early 2028 and reach ‘Oumuamua, based on its speed and travel direction as it left our Solar System, between 2050-2054. For the first four years of the mission, it would orbit around the Earth twice, and Venus and Jupiter once to gain gravity assists, sending it on its way towards the mystery space object.

Solar sail technology, which was proven to work by the Planetary Society’s LightSail 2 proof-of-concept mission, would help to power the probe on its way to catching up with ‘Oumuamua. However, the mission would utilize a photon sail at least partially powered by a laser on Earth, in a similar fashion to Breakthrough Starshot’s concept for a light sail probe that could reach our nearest star system, Alpha Centauri, within two decades of launch.

Though other teams have proposed missions to ‘Oumuamua, most of these have relied on performing an Oberth maneuver around the Sun. In other words, as the probe starts falling into the Sun’s gravitational well, it will power up its thruster giving it a massive speed boost. As this would require a massive shield to protect against the Sun’s heat and radiation, the I4IS team proposed employing an Oberth maneuver around Jupiter instead. ”The mission would much more resemble existing interplanetary missions,” the authors explained. However, the launch date would have to be set no earlier than February 2028, due to Jupiter’s current orbital alignment.

Since ‘Oumuamua was first observed, one other interstellar object, named C/2019 Q4 (Borisov), was discovered. Unlike ‘Oumuamua the comet was found to much more closely resemble other space rocks observed throughout history. All the more reason to chase ‘Oumuamua and discover its mysteries. That’s, of course, if it didn’t already make a beeline to its nearest spaceport.

Editor’s Note: An earlier version of this article featured errors in the spelling of ‘Omuamua. It has since been corrected.

NE-YO Returns with New Single “Don’t Love Me” via Motown Records
Rod Stewart Tells Bill Maher He and the Queen Have Something in Common
Automatic Release New Song ‘Skyscraper’
Is the Saint Laurent Shopper Tote This Summer’s New It Bag?
New “Daredevil” Series Reportedly in the Works at Disney+