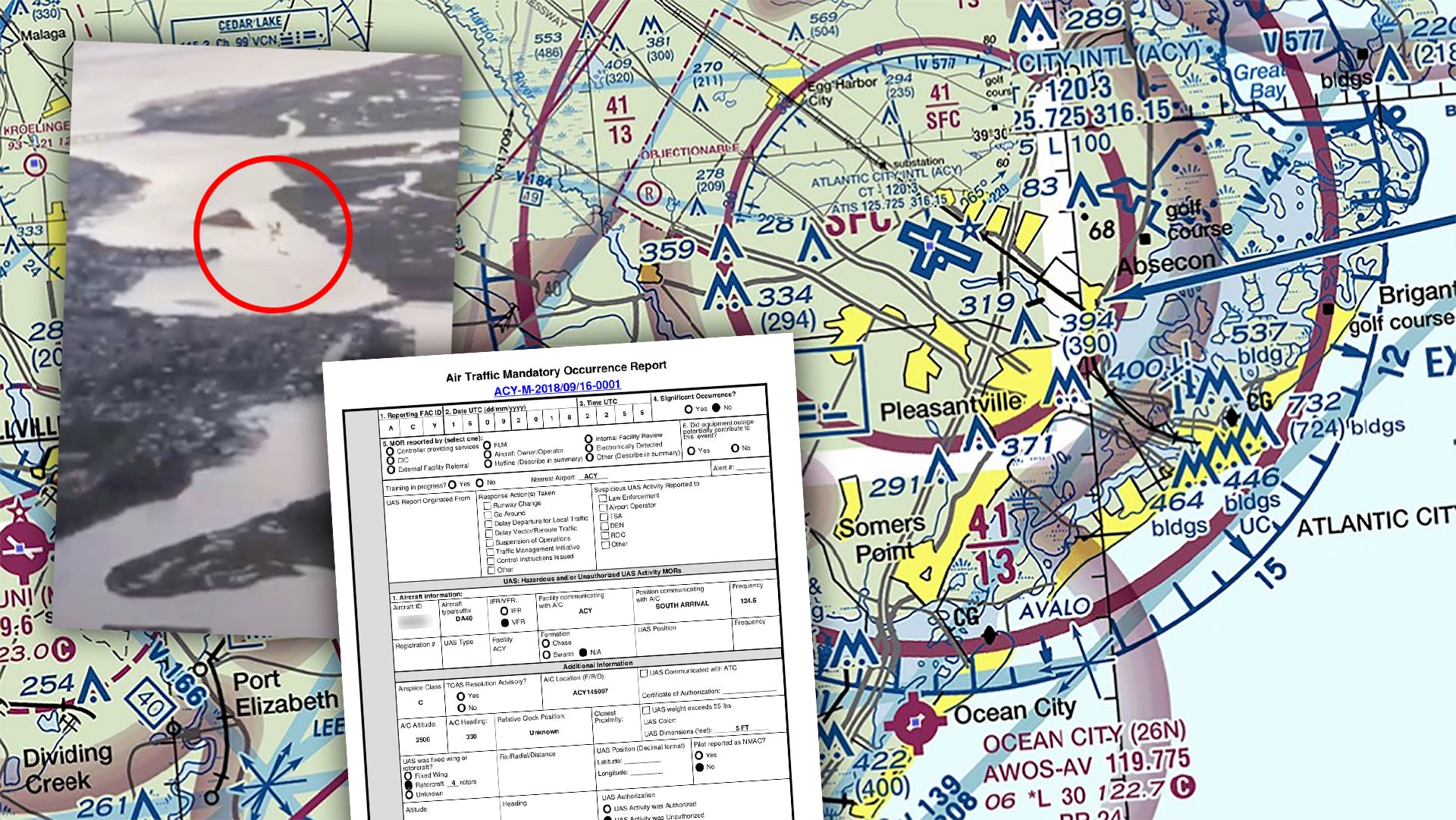 In recent years, the Federal Aviation Administration (FAA) has seen a significant rise in drone incidents. At The War Zone, we’ve been digging into the details of these sightings, notably through our interactive database of over 10,000 FAA reports. In a previous investigation, we used these and other records to show how unidentified aircraft have caused safety issues within military training ranges. These FAA reports also added further incidents to The War Zone’s exclusive reporting about drones operating over nuclear facilities and other highly sensitive locales.

While many of the reports are highly concerning, some are outright strange. In one of the more peculiar reports, a pilot flying a Diamond DA40 light aircraft described a highly unusual object mirroring his aircraft’s maneuvers while flying at more than 2,000 feet above Atlantic City, New Jersey on September 16th, 2018. We have received video, audio, and documents regarding the incident via the Freedom of Information Act (FOIA). You can watch the puzzling video below:

An account of the incident was originally filed via the FAA’s Mandatory Occurrence Report (MOR) process. By FAA regulations, MORs must be generated whenever a pilot reports unauthorized or otherwise unsafe unmanned aerial system (UAS) activity. Both the behavior and reported altitude of the object likely prompted the report. The FAA requires drone operators to fly below 400 feet and to not interfere with manned aircraft operations.

This particular MOR caught our attention because it described dynamic maneuvering on the part of the UAS, as well as an unusual description of a large camera hanging from the object along with a large v-shaped antenna or structure on top. You can read the original summary below. We have redacted the pilot’s personal information as a courtesy:

Fortunately, this incident report included audio from the FAA’s interview with the pilot that occurred shortly after the event. As the summary above indicates, the person filing the report is also an Air Force KC-135 aerial refueling tanker pilot and is very familiar with this particular airspace. You can listen to the pilot’s call to an air traffic controller here:

The pilot recounts initially thinking that the object was a set of balloons. Puzzled by it, he slowed down to get a better look. He described how the object climbed along with him and seemed to intentionally stay opposite his aircraft, mirroring his turn. Throughout the conversation, the pilot makes several references to a video taken by a passenger, though he cautions that the video is limited in detail. Indeed, there appear to be prominent compression artifacts in the video.

Asked for a basic description of the object, the pilot indicates that while he was familiar with drones, it was hard to concretely identify what he saw. He mentions the strange v-shaped antenna and a payload hanging off the bottom of the object. The pilot describes the payload as potentially being an articulating camera. Adding to the physical description, he indicates that it did not appear to be a fixed-wing aircraft.

In terms of the behavior of the object, the pilot remarks about how effectively the object circled him, speculating that it was likely trying to get a “cool video” of him. He remarks that while it might be a cool video, it was “super dangerous.”

As the air traffic controller momentarily struggles to describe the events, the pilot chuckles and volunteers that it was a UFO sighting. Continuing to chuckle, he says, “it was an unidentified flying object; of course, it wasn’t an alien.”

Later in the audio, the pilot asks what will come of his report, and if it would be possible to get more information about the identity of the object. The controller explains that though they have primary radar capable of detecting aircraft without a transponder, they did not pick up the object. The pilot remarks that this isn’t surprising given the small size of what he saw, which he estimated to be about half the length of his wing, or five feet. He also repeats that he was surprised to realize the object was not a balloon, and appeared to have a camera, as well as a few LED lights. He adds that it did not look like any easily recognizable type, except that it seemed to have four possible rotor mounts on each corner without the propeller guards typically seen on hobbyist quadcopters.

The controller asks the pilot “you’re kind of rattled, aren’t you?” The pilot explains that he is mostly curious, especially given the unusual speed and behavior of the object. Interestingly, the controller says “you’re not the first, just so you know.” Indeed, FAA records show several other UAS sightings in this area, including the one reproduced below that came just a few months prior where a fast-moving drone was operating at a relatively high altitude of 8,000 feet:

It is unclear if the FAA ever made a determination of what the object was. Other unusual incidents have been reported within this busy coastal airspace, such as this 2018 case of a bright object spotted by a Piper Saratoga aircrew over Long Island.

The incident reflects the broader challenge of effectively documenting and describing unidentified objects. The pilot’s joke about UFOs makes it clear that he could not immediately identify what he was seeing despite his experience in military aviation. While the object may be classified as a UFO, the pilot was clear that he did not mean the common cultural connotation of the term in the sense of something otherworldly.

The issue of unidentified aircraft and UFOs, more broadly, has been a topic of renewed attention in recent years, including the release of a government report in June of last year. The Department of Defense now refers to unidentified flying objects as “unidentified aerial phenomena,” or UAP, and defines them as “airborne objects not immediately identifiable.” By this definition, the object could arguably be categorized as UAP.

This incident stands as an interesting case study in how modern airspace is becoming more complex. Despite the availability of radar, video footage from within the aircraft in broad daylight, and immediate firsthand testimony from a trained military aviator, the object is not easily identified. While, according to the pilot, it was likely a rotary-wing drone carrying a camera payload, there is just enough uncertainty in the description for it to also be called UAP.

This uncertainty is perhaps inevitable given the growing diversity of unmanned aircraft systems. Drones can take on a vast multitude of shapes beyond the popular quadcopter design, and are sometimes hybridized with other elements of different aircraft types. For example, separate FAA incident reports describe drone-balloon hybrid aircraft, a design that has been explored by multiple startups and manufacturers. Drones like the Zero Zero Robotics V-Coptr Falcon use a bicopter tilt-rotor design that gives it an unusual v-shape appearance. Really, drones can be made to appear like almost anything and can exhibit unfamiliar flight characteristics that are dissimilar to those commonly observed with traditional rotary or fixed-wing aircraft.

As we have seen in cases like the high-speed chase of a sophisticated drone over the skies of Tucson to the more recent rash of sightings over Swedish nuclear facilities, the problem of unidentified aircraft will likely continue to become more sustained and serious as drone technology continues to proliferate in coming years.

There is also the case of bizarre manned platforms that may be operating outside FAA guidelines. Some very strange flying machines have been built by individuals over the years that may be hard to identify. This will only become a bigger issue as E-VTOL aircraft become more commonplace. Their configurations vary widely and many look unlike anything presently gracing the skies on a regular basis.

Regardless, this is a unique, highly documented case by the FAA that offers a good sense of how confounding this problem is and how the agency tries to respond to and document it.

What do you think the mystery craft is? Let us know in the comments below.