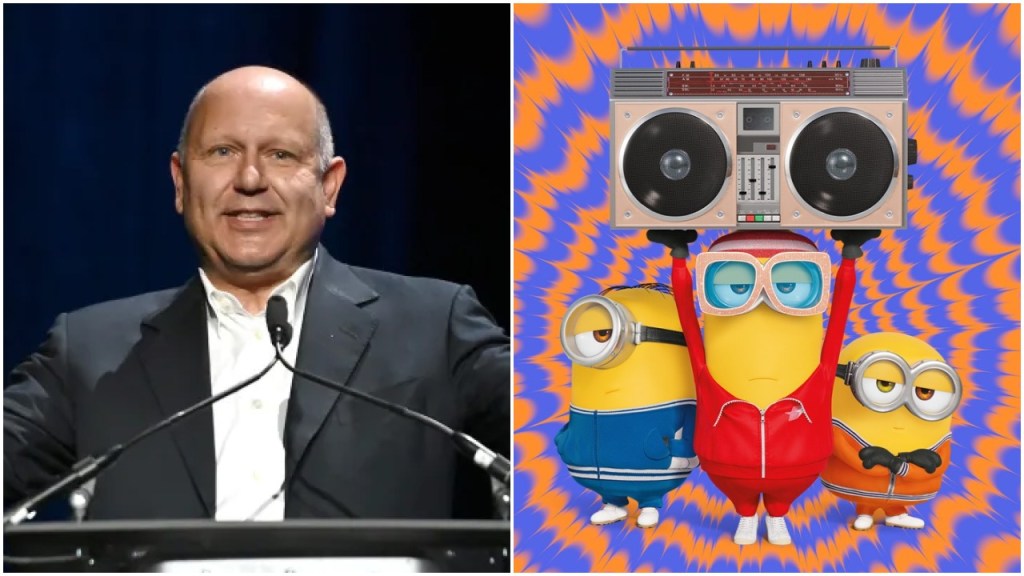 As part of the opening day here at CineEurope in Barcelona, Illumination founder and CEO Chris Meledandri shed some light on everything from the upcoming Minions: The Rise of Gru to whether we’ll see a same-sex kiss in a future Illumination title and how one long-ago misfire helped inform his career.

In a wide-ranging onstage discussion with Deadline’s co-Editor-in-Chief, Mike Fleming, Jr., Meledandri — whose hit-making studio will celebrate its 15th anniversary next year — said it never was an option to send The Rise of Gru to streaming even though it was teed up for release in late June 2020 before Covid forced a delay.

With Box Office Flying High, How Do Exhibition & Distribution Maintain The Momentum?: CineEurope

Said Meledandri: “It was a unified point of view that we were going to wait it out for audiences to come back to the cinema. None of us knew it would be two years, but none of us blinked. … I know where my heart lies, and it transcends whether or not a decision isn’t the best business decision in the moment. I think our global culture of cinema is at stake here.”

Universal has its own streaming service, Peacock, and Meledandri said he was “thrilled” to be part of building it, “but not at the expense of motion pictures and cinemas.”

He continued that Illumination is in a “period of discovery.” The company is “going to have to evolve. We can have a commitment strategy to movies as a cinema-going experience and we can layer other business on top of that.”

In general, is it harder to release movies now than when Illumination began? For Meledandri, the volume of films — and not just animation, but those chasing the same audience — has grown. “We’re in a much more competitive environment,” he said. “Opportunities to seize the attention of the audience and deliver enough content that excites them to come to the theater progressively becomes more difficult. With digital messaging, you’re not getting 30 seconds; that has been challenging but also triggers new creativity.”

Fleming noted Pixar’s decision to include a same-sex kiss in the just-released Lightyear, which got it banned in certain countries, and wondered if Illumination ever might portray something similar. Meledandri responded that although this hasn’t been something that came up on previous films, “It’s going to be far more relevant to our future than our past. … There are topics of conversation right now that are very relevant to what we’re doing in the future that get into areas that potentially might not please everyone. I think you have to honor the stories that you tell, honor the choices that your filmmakers make, and you have to be willing to not have everybody pleased all the time. … Universal is an exceptional partner when it comes to these types of issues.”

He continued: “The minute you start using the point of view of Twitter or the point of view of every single culture, no matter how intolerant they are, to guide your creative expression, I think you’re on a very slippery slope — not only morally but creatively. It’s impossible to protect the creative process and still be trying to figure out how to thread a needle that’s never going to offend anybody.”

Regarding any upset over casting the non-Italian Chris Pratt as Mario in the upcoming Super Mario Bros Movie, Meledandri asserted: “When people hear Chris Pratt’s performance, the criticism will evaporate, maybe not entirely — people love to voice opinions, as they should.” He added, “I’m not sure this is the smartest defense, but as a person who has Italian-American heritage, I feel I can make that decision without worrying about offending Italians or Italian-Americans. … I think we’re going to be just fine.”

Speaking of the partnership on that film with Nintendo, Meledandri called it “the fulfillment of a really important objective. Nintendo is one of the companies we respect and hold in high esteem; this collaboration I think is unprecedented in its closeness.”

Meledandri does have one notable misstep in his past, supervising costly misfire Titan A.E. while running 20th Century Animation. Fleming wondered what was the most valuable lesson the exec learned from that experience in terms of what not to do when he created Illumination.

“Losing $100M of Rupert Murdoch’s money is not fun,” he said. But Meledandri added that the biggest lesson “was how I dealt with the aftermath of it. I was seized with a tremendous amount of fear. I had to make a choice whether I was going to give in to that fear or stare it in the face and steer through it. It was not easy, it was one of the darkest parts of my life.”

When starting Illumination, Meledandri said, “I once again had to check myself. What followed Titan was Ice Age, which was one of the most profitable films in the history of the studio. But leaving Fox after 13 years to start a company and start again with nothing, I had to confront a tremendous amount of fear doing that. That’s really the lesson — there are things that are going to happen in your life that are highly dislocating, and you have to figure out how not to get crushed by them.”