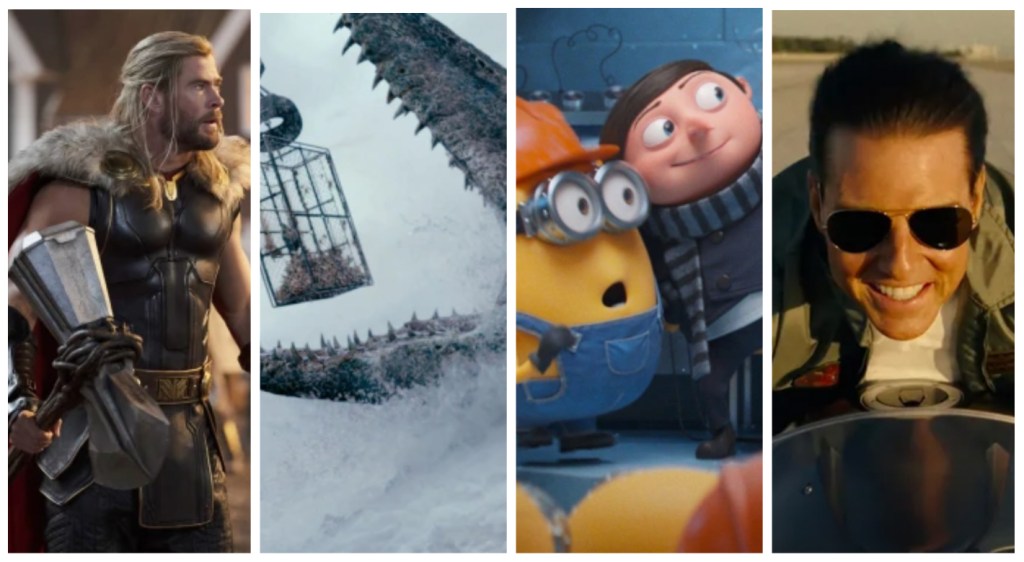 Refresh for latest…: There remains plenty of action at the international box office as we head into the dog days of summer and with fewer wide releases to come. This past week and weekend includes milestones aplenty for such films as Thor: Love And Thunder, Minions: The Rise Of Gru, Jurassic World Dominion, and the seemingly unstoppable Top Gun: Maverick. But it’s not a free-for-all as audiences now appear more discerning amid the recent barrage of big-ticket titles — adding to that, there is a very threatening heatwave across European majors which is complicating matters on several levels.

Disney/Marvel’s Thor: Love And Thunder led the international box office weekend in its sophomore session, with an added $60.1M from 47 material markets. The global cume is thisclose to $500M with $498M through Sunday. The overseas drop was 59% from last weekend. That’s a skosh lower than Spider-Man: No Way Home’s 60% sophomore dip (though that movie was a holiday release) and deeper than Doctor Strange In The Multiverse Of Madness (-56%) in the same suite of markets for the second frame.

Regionally, Asia-Pacific saw the biggest slide on Thor 4 (-64%), Europe/Middle East/Africa was down 56% and Latin America 53%.

Should we be celebrating or lamenting this major Marvel entry — $500M is nothing to sniff at across two weekends — but it is certainly being dinged by reviews, and has competition from a continuously surging Top Gun: Maverick which took back PLFs this session in some markets. Also, a codicil for all films right now, comps are tough since currency exchange rates have gone haywire. The dollar and the euro are essentially at parity. There’s runway ahead for Thor and the gang, but it’s iffy.

Universal/Illumination’s Minions: The Rise Of Gru, meanwhile, has now crossed $500M worldwide, becoming the 8th Illumination movie to the milestone and now the biggest animated picture of the pandemic. The offshore cume is $270.1M for a running global total of $532.7M through Sunday.

As for Paramount/Skydance’s Top Gun: Maverick, there’s just no stopping this hypersonic movie. It added $19.2M in 65 markets this weekend — it’s 8th — for an offshore cume of $619.4M. The hold was -22% and the global cume is now $1,247.4M. As we reported on Friday, the Tom Cruise-starrer is Paramount’s biggest worldwide release ever.

Also in milestones, Uni’s other mega-movie currently out in theaters, Jurassic World Dominion, is stomping past $900M global today, making it the 3rd film of 2022 to the mark. The offshore cume to date is an estimated $542.8M with worldwide at $902.5M. JWD also continues to be the biggest Hollywood title of the year in China where it has crossed RMB 1B to stand at $150M. The entire Jurassic franchise will soon cross $6B global.