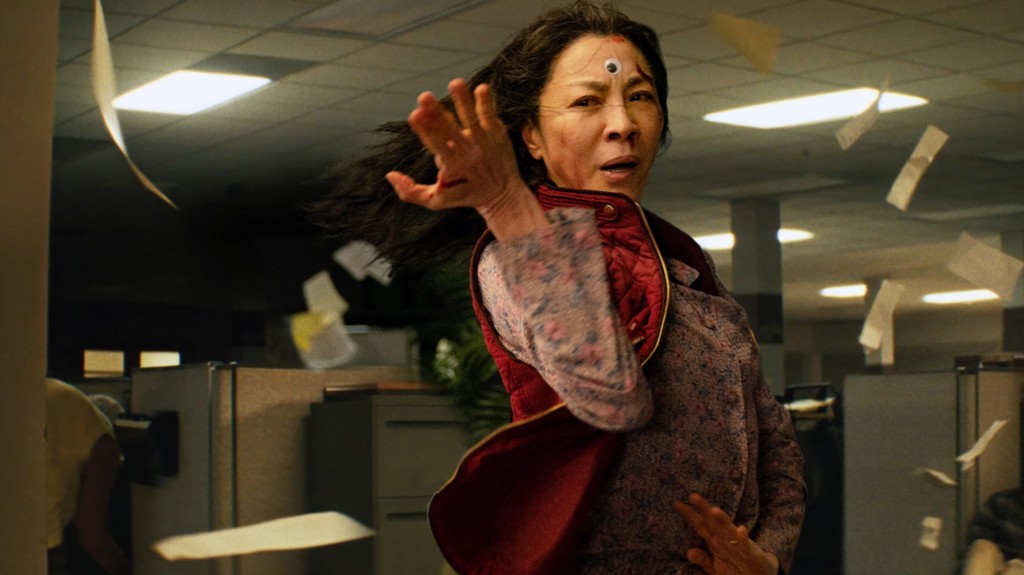 A24’s highest grossing movie ever, the martial arts fantasy Everything Everywhere All at Once, is going wide again in cinemas on July 29.

The latest cut from Dan Kwan and Daniel Scheinert, which took off like a rocket ship from its SXSW world premiere, will include a new introduction from the filmmakers and eight minutes of outtakes.

The pic has been saving grace for arthouses, which in the wake of closing during the 2020 pandemic, have faced the slow return of older moviegoers. Everything Everywhere All at Once dynamited the over 25 crowd out of their homes in Comscore/Screen Engine audience exits with a domestic gross of $67.95 million and counting and a global haul near $94M.

A24 is planning a push for the Ley Line Entertainment co-financed feature this awards season. The Daniels’ directed movie is 95% certified fresh on Rotten Tomatoes with an audience score of 89%.

A24 has another well-received SXSW premiere hitting theaters on Aug. 5, the Pete Davidson horror comedy Bodies Bodies Bodies which is getting sneaked down here at San Diego Comic-Con.

A24 previously did a re-release of a longer director’s cut of another summer hit, Ari Aster’s Midsommar, in August 2019. That pic’s running time went from 147 minutes to 171 minutes.

Check out the new trailer below:

Ludacris Says He’s Spreading Positivity Because The World Needs It
Barry Goudreau of the Band Boston to be Inducted in the New England Music Hall of Fame
An Inside Look at Kylie Jenner’s Life With Travis Scott and Their Two Kids as She Turns 25
South Carolina Senator Demands Book Removal; Threatens Public Library Jobs and Funding
Artist Spotlight: Claude