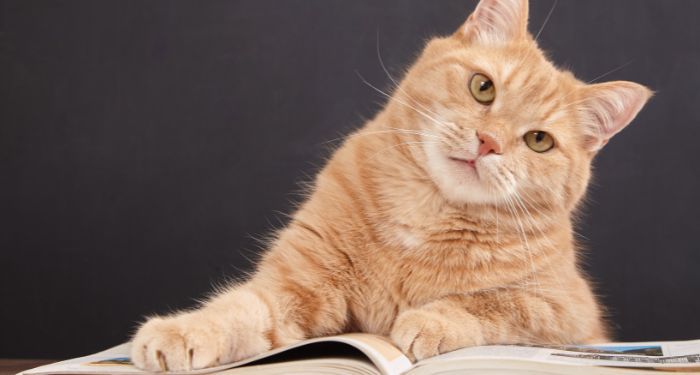 Who amongst us doesn’t love cats?! Even I, a person who has historically been most drawn to dog books, knows a good cat story also very much has its place. I mean, who can resist those furry, whiskered faces and that signature cat attitude? As a significant symbol in Japanese folklore, cats feature prominently in Japanese literature, and manga is no exception! In cat manga, our feline friends may appear in the form of realistic pets, magical companions, or anthropomorphized in some way.

Before we get to the manga recs themselves, allow me to tell you a little bit about my childhood cat, Ziggy. He was a stray, found alone in a parking garage by my dad’s coworker, and somehow found a home with us despite my mother’s long-standing fear of cats and my long-standing desire for a dog for god’s sake! And thus began our eventful, worthy-of-a-yonkoma-manga life with Ziggy. From that time he fell into the toilet, to the time he tore into and ate an entire unopened box of donuts, to the way he bullied our dogs on a daily basis (yes, my wish did eventually come true), Ziggy was quite the character. And much like Ziggy, the cats featured in the manga here have unique, irresistible personalities, and you’ll be sure to have a ball reading about each of them. Enjoy! 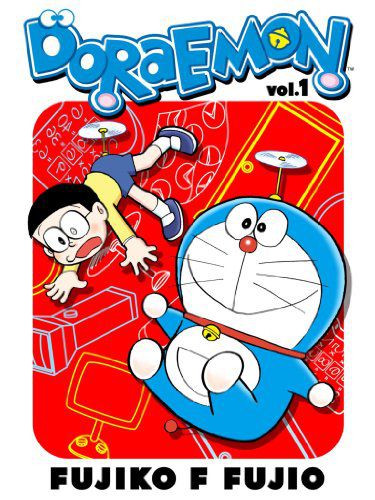 I can’t talk about cats in manga without starting with the iconic Doraemon. Doraemon is an earless robotic cat sent from the 22nd century to befriend and help Nobita, a young boy who is kind but lazy. Being from the future, Doraemon possesses many incredible gadgets that he uses to aid Nobita in overcoming the various troubles he runs into. This manga series, which started in 1969, has spawned an enormous media franchise that remains one of the most popular to this day. 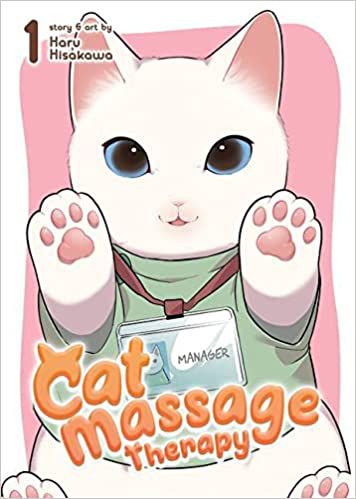 Nekoyama is a normal salaryman who, weary from another long day at work, decides to stop at a massage parlor on his way home. He is shocked, however, to discover that the massage parlor is run by cats! Though he considers himself more of a dog person, Nekoyama cannot deny the skill of his feline massage therapist as his aches and worries fade away. Soon, even more humans begin to discover the healing touch of these cat massages! 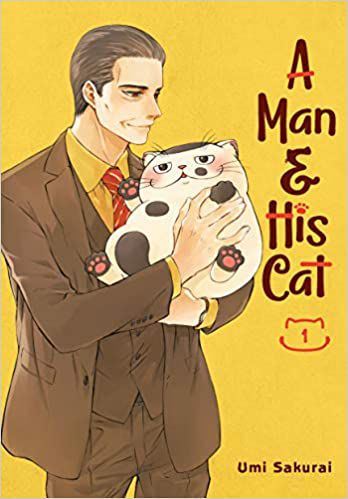 A Man and His Cat by Umi Sakurai

A large, homely cat has resigned himself to his fate of spending the rest of his life in the pet shop, as small kittens keep getting adopted while he is passed over time and again. But one day, an older man who was recently widowed comes into the shop and adopts him! This is a heartwarming slice-of-life manga about two kind souls who just want to love and be loved. 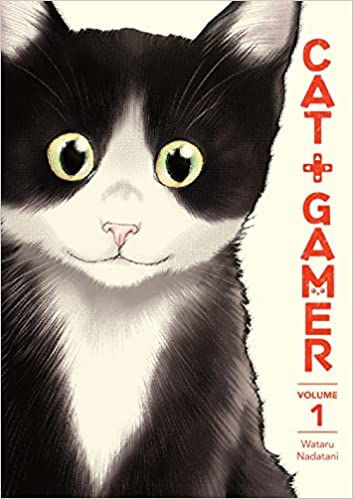 Riko is a heavy gamer. She works at full efficiency so that she never has to work overtime and turns down any invites to socialize after work, all so that she doesn’t lose even a single precious minute of gaming time each day. So when a stray cat found in the office parking lot ends up in her care, her life is turned upside down. Using her knowledge from video games as a guide, Riko gradually learns how to care for and love her new pet. 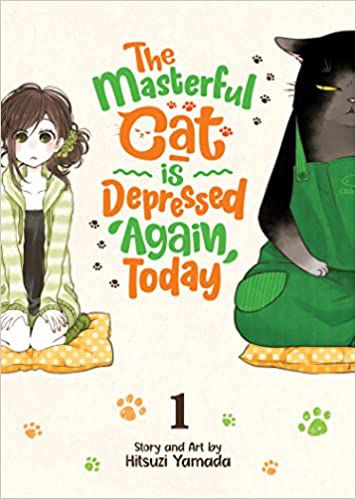 The Masterful Cat Is Depressed Again Today by Hitsuji Yamada

Saku is an average young woman who lives alone with her cat, Yukichi. Only Yukichi is no ordinary cat. He is human height, walks around on two legs, and is skilled at cooking and cleaning. Though Saku may not have her whole life figured out just yet, at least she’s got her capable, albeit grouchy, companion to care for her. 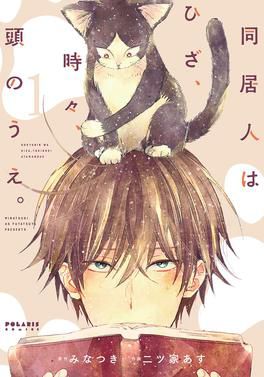 My Roommate Is a Cat by Minatsuki and Asu Futatsuya

Subaru Mikazuki is an introverted mystery writer who is reluctant to leave his home. One day he happens upon a stray cat and takes her in. The story of these unlikely companions as they learn to bond switches back and forth between Haru (the cat) and Subaru’s perspectives. This manga was licensed in English in the form of a webcomic, so get ready for a lot of scrolling in your future! 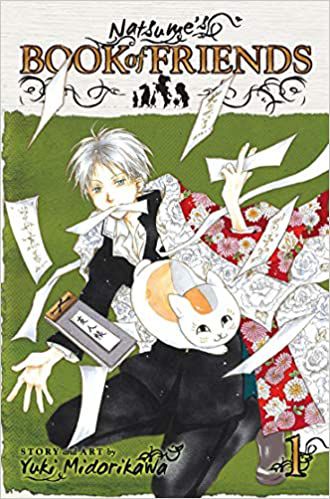 Takashi Natsume is a teenager with the special ability to see ayakashi, or spirits, a power he inherited from his grandmother Reiko. Upon her death, Reiko leaves Takashi her Book of Friends, which contains the names of all the ayakashi she bound under her control. Takashi takes it upon himself to dissolve all the contracts in the book and release the ayakashi. The yokai Madara, who Takashi calls Nyanko-sensei due to the fact that he appears in the form of a cat, is his companion and “bodyguard.” 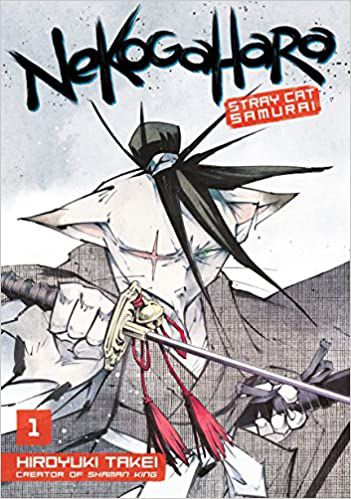 In an alternate version of feudal Japan, anthropomorphic cats struggle for survival. Norachiyo is a rōnin, and he spends his days wandering Japan protecting the weak and defeating adversaries. With his unparalleled swordsmanship and formidable reputation, Norachiyo has made many enemies, but will he be able to stay ahead of his past forever? For great samurai action with a feline twist, Nekogahara is the manga for you! 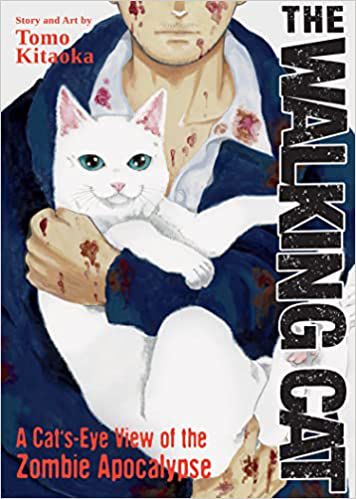 The Walking Cat by Tomo Kitaoka

Read this unique horror manga to see the zombie apocalypse through a cat’s eyes! After a young man named Jin saves a cat from a deadly fate, the two set off on a journey together, surviving amidst the ruins of civilization and evading zombie attacks, to try to find a mysterious island and Jin’s wife. 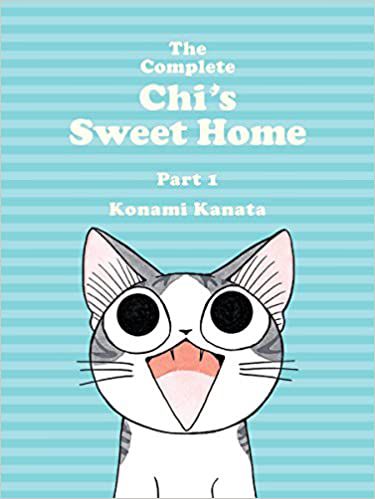 After being separated from her family and getting lost, mischievous little kitten Chi is taken in by a young boy named Yohei and his family. This slice-of-life manga follow’s Chi’s adventures as she learns the ways of the world and gradually becomes acclimated to her new home.

Bonus: Besides Chi’s Sweet Home, Konami Kanata has actually written a number of manga featuring adorable cats and their daily shenanigans, so be sure to check them all out!

For even more excellent manga reads, check out these animal-centric series, and of course our recommendations for best manga series all around!

“The Walking Dead” – Norman Reedus Spinoff Will Take Daryl Dixon to France
These Wide-Leg Jeans Are a Chic Answer to the Denim Debate
Teaser: ‘Joker: Folie à Deux’ and Everything We Know About The Upcoming Film
Scream’s Neve Campbell Further Explains Why She Passed On The Upcoming Sixth Movie
12 Best Thor Comics Ever