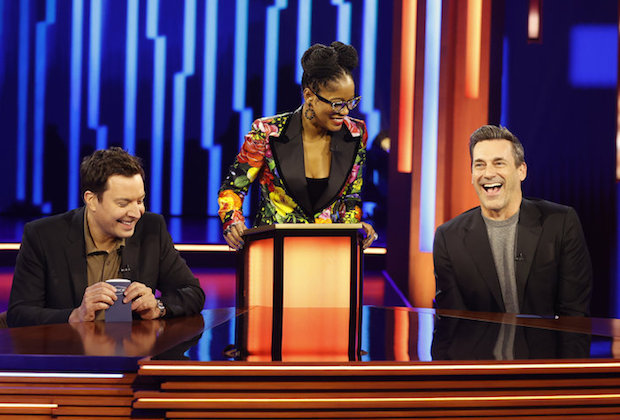 The first teaser for NBC’s Password did this revival zero favors, edited as it was to make a game about the quiet, considered exchange of clues and guesses seem amped up, madcap and rife with Jimmy Fallon antics.

But having now screened multiple installments of the eight-episode summertime revival (which kicks off tonight at 10/9c, followed by a Wednesday-at-9 outing), I can report — with more than a bit of surprise, I admit — that the new Password is… not bad? And even a lot of fun at times.

No, I’m still not a fan of the set, which has none of the coziness from the (deep cut alert!) Allen Ludden-hosted era, but instead seems dictated by the law that every primetime game show since 1999 has to evoke Who Wants to Be a Millionaire. (Is ABC the only network that knows how to lovingly emulate classic game show sets?) And for some reason, the off-camera voice whispering the password to us at home has opted for a delivery best described as “Hmm, Kinda Creepy.”

But the gameplay is faithful to that which we all know (save for a flourish or two), and the proceedings are overseen by a pretty perfect host. Keke Palmer clearly is well-schooled on the rules/scorekeeping and thus keeps the game moving along, but most importantly she is simply “Keke Palmer hosting Password.” She isn’t here to draw attention to herself (fabulous as her rotation of eyewear is) or rummage for a catchphrase, though she will occasionally let slip a pointed observation or reaction — such as when Heidi Klum uses “urination” as a clue for… well, you’ll see.

The familiar format is this: Fallon (who has occasionally resurrected Password on The Tonight Show) each night serves as a celebrity player alongside the likes of Jon Hamm (in the premiere), the aforementioned Klum (Night 2), Yvette Nicole Brown, Tony Hale, Chelsea Handler, Joel McHale, Chrissy Metz, Martin Short, J.B. Smoove and Meghan Trainor. The celebs proudly introduce their civilian partners, secret passwords are handed out, and the teams take turns offering up one-word clues to hopefully prompt a correct guess.

After one round, the celebs switch sides, and the first contestant to win two out of three advances to a bonus round. There, the contestant speed-feeds clues to both celebs to hopefully coax out 10 out of 10 passwords within 60 seconds, and claim a $25,000 grand prize. But even if they fall short, there’s a one-password “Redemption Round” that can double their winnings for the night. 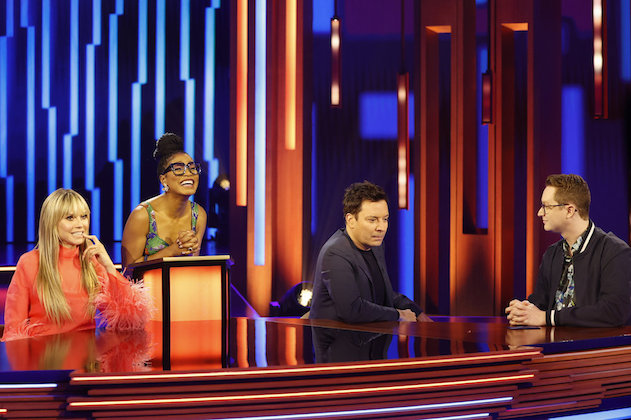 As much as the trailer plays up Fallon’s “energy” (namely, a clap-along that he initiates in an early episode, before unleashing his correct guess), he puts himself on equal footing with the other celebrity guests. Also, the banter Fallon enjoys with each celebrity, presumably founded in preexisting friendships/Tonight Show visits, serves the show well, especially when it leads to playful taunting. Jon Hamm, for one, is a great pick to lead off things, being incredibly genial, witty, and unafraid to make a funny face while repeatedly saying the clue “bonessss.” Klum, meanwhile, jokes about English not being her first language, but her accent does seem to derail her delivery of at least one clue (when “Victoria’s” is mistakenly heard as “victorious”). Oh, and she seems to think Jimmy Buffet sings a sing called “Tequilaville.” That, the aforementioned “urination” clue, and a little dance Klum does throughout the fast-paced bonus rounds add up to some charming moments.

Lastly, primetime game shows these days are prone to overtly “casting” the civilian players — meaning, subjecting us to an outsized personality who seems to be auditioning for a bad sitcom instead of casting John Q. Public. Thankfully, that (pretty much) wasn’t the case in the episodes I watched. And while one contestant at first appeared to be not the best fit for this show, the switching of celebrity partners led to a prompt turnaround in their fortune.