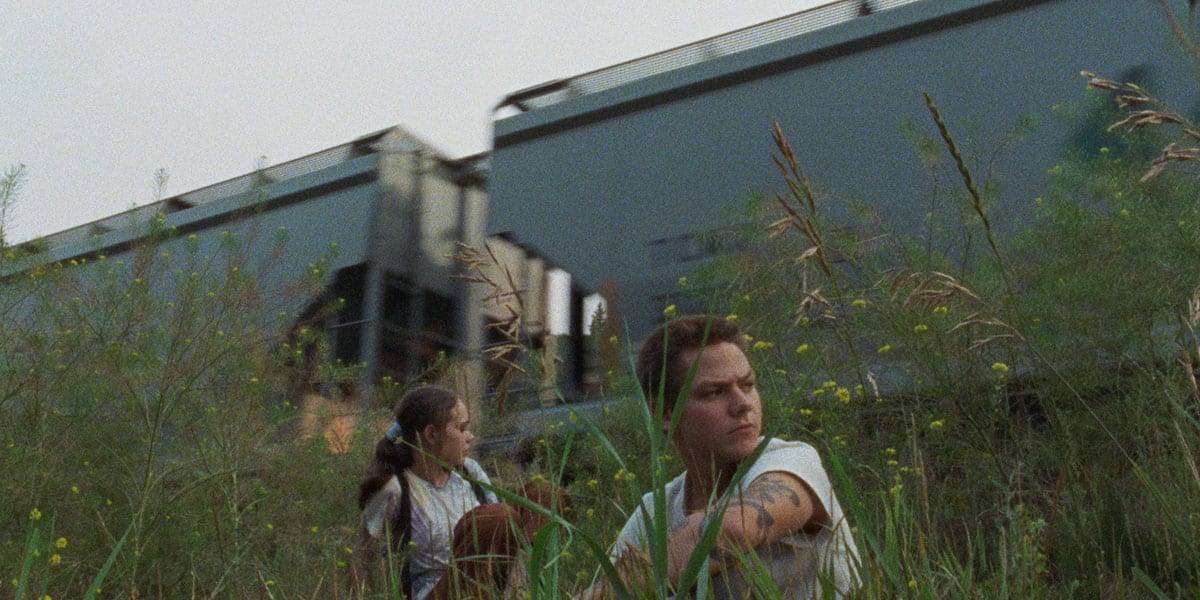 The Maiden, Canadian filmmaker Graham Foy’s first feature, is a plunge into the lonely wilderness of youth. Set between unpopulated Calgary backroads and somber school halls, the film follows the carefree friendship of two high school skateboarders: Colton (Marcel T. Jiménez) and Kyle (Jackson Sluiter). Yet when a locomotive accident takes Kyle’s life, Colton is left alienated in a dense mist of grief. He floats through a frozen world, shattered by its propensity for sudden and irrational violence. When Colton stumbles on an abandoned diary in the woods (its pages scrawled with cryptic ruminations like “What do trains dream of?”), the narrative bisects and shifts to another perspective: Whitney (Hayley Ness), a missing 14-year-old. Her life, unfolding around the same spaces Colton and Kyle shared, teeters on the verge of invisibility. Like the boys, she’s a lost soul avalanched under the weighty uncertainty of adolescence, fantasizing about escape. The Maiden is consumed by the mysteries of death and the possibilities of afterlives. It summons a tender communion with sprits, presenting a world where absence is a mask for transience, and where we can foster connections beyond the limits of words, time, and space.

Foy’s vision of youth is an aimless wander through abandoned spaces. Together, Colton and Kyle skateboard across dusty side roads, fish through river water, climb into basements of unfished residential houses, and graffiti under rusty bridges. These routine and unglamorous spots become sites of the sublime for the two boys. The laidback, destination-less voyage of adolescence feels magical and gentle when shared with a friend. Yet when Kyle’s gone, the landscapes embody an aching melancholy. Their old graffiti tags become ghostly souvenirs: relics of an uncanny past world that, by all affective measures, feels dead. Every place Colton revisits alone becomes a memento of a lost friend and, even broader, a lost world.

Violence looms peripherally in The Maiden’s world. Yet it’s not violence unleashed by any physical antagonist. Instead, it’s an ambient violence, something inherent to nature: eruptions of an uncontrollable world. Kyle’s death isn’t depicted on-screen. Instead, Foy uses a much more haunting image. He cuts around the collision with Kyle’s body but lingers on the endless procession of compartments which burst across the track, plowing over where Kyle stood full of life just moments ago. Violence registers through the shot’s duration, dwelling on the composition until the train’s rumble is a distant hum. All the while, Colton watches silently. He can’t interfere, he can only gaze forward.

There’s also a haunting shop class vignette where a student’s table saw mishap slices of three fingers (we never see him again; there’s no indicated resolution to his catastrophe). The moment unfolds quietly, onlookers unsure how to respond. Foy’s camera follows one student as he bursts out the door and dashes through the school halls, popping his head into classrooms and announcing the news like a town crier. The Maiden captures so many disparate responses to the spontaneous, rupturing presence of violence. Each reaction is distinct, but they’re all united by a shared vulnerability and confusion. The Maiden suggests there’s no innate or rational response in the destabilizing face of violence. We’re all equally lost.

Foy mixes raw and unpolished performances (enormous praise to Jiménez, Sluiter, and Ness) with a soft and reflective energy, rooted in the enchanted natural environment. The un-stylized performances, complete with a uniquely authentic-sounding teenage vernacular, suit the mostly handheld 16mm aesthetics. Foy often uses extreme-close-ups of facial fragments over standard, full-face portraits. In moments of motion, subjects are unevenly framed or out-of-focus, the camera bobbling around their faces. Yet despite the rugged camera motion, Foy finds calm amidst the chaos. Quasi-documentary cinematography fuses with slow-paced, non-expository storytelling, treating its landscapes like spiritual epicenters. Moments of stillness—and there are plenty—always exist in proximity to jaggedness.

The Maiden stages a rendition of youth dislodged from a singularity of time and place. Temporal ruptures become more than flashbacks but, instead, fractures of chronological time. Foy’s mise-en-scène infuses the story with timelessness and placelessness. For a film about teenagers, there are few technological or cultural period-setting markers. Further, the movie’s set in Calgary, but the specificity of location is unimportant and only implied through the prevalence of cowboy hats on teenage heads. Calgary stands in for an everywhere: an open wilderness where we all roam as equals, escaping the cruelties of the outside world. Ultimately, the film proposes a spiritual field beyond the finality of death. It projects an afterlife where we can wander forever, with no rules and no structures: just exploration and love between friends.