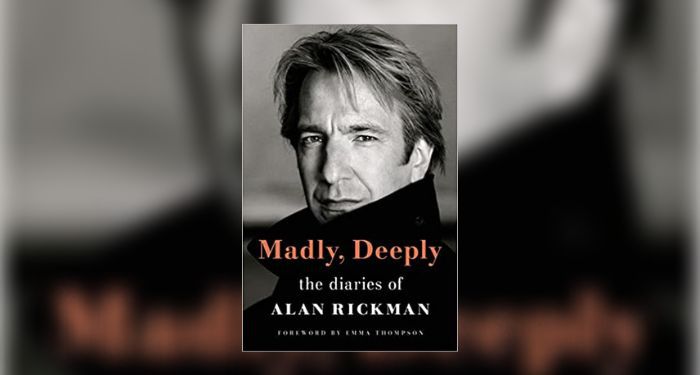 Alan Rickman had no idea who I was and that was probably for the best because neither did I.

I have just finished reading Madly Deeply, the Diaries of Alan Rickman. In the last few weeks, I have had to work through what he actually meant to me beyond that I loved him when I was 12 and sort of never got out of the habit. What started out as a severely weird preteen crush turned into something else. Was he a role model? I never wanted to be an actor and there were any number of people I sought to base my life on that weren’t him (I’ve always wanted to read and write all day in my pajamas, and his journals showed me that he traveled a lot).

I never wrote him a fan letter and I assume had he known about me he would have told me to go find a Jonas Brother. In his journals, he describes an encounter with a starstruck fan as leading to the realization, “that [the fan was] staring at someone frazzled, dusty and ordinary.”

I have absolutely outgrown this. Right?

It never grew to the level of a parasocial relationship or anything — I never felt like I knew Rickman or that he was my friend. When I finally came around to the idea that he was much too old for me and in a very long relationship to boot, I just thought he’d be a good person to talk to, to get advice from. In short, he was influential in my life. I read Jane Austen because of Sense and Sensibility. My Name is Rachel Corrie made me curious about Palestine. In the journals he talks about, “people who absolutely shaped what I do, what I am doing, and who I am” and he was certainly one of those people for me.

All this to say, I was clearly a weird kid and maybe I also sensed that he considered himself to be bit of an outsider, too. I laughed that he commented on airport lounges: “I wish these lounges weren’t so devoted to the bored & boring. Perhaps there could be a door marked Eccentrics and Weirdos Only.”

As I was reading, I started noting down the titles of the books he was reading, so I guess I haven’t quite grown out of this. You could do worse than taking life advice from Alan Rickman.

When I read the Guardian’s announcement of the acquisition of the diaries for publication, it stated that they were always intended to be published. The diaries’ own editor seemed less sure on that point. Parts of what I read feel like they were written for another set of eyes but others were in a rather personal shorthand and mentioned people, places, and events that I couldn’t quite grasp.

I kept journals inconsistently in early adolescence and much more regularly through my junior year of college. I still have them, mostly because I can’t quite bring myself to throw them away. Weirdly, reading these journals and thinking about the nature of journaling made me both really committed to make sure my own old journals never see the light of day but also to getting up to date in my current one-line-per-day journal. I am eternally about two weeks behind.

When reflecting on his earlier journals Rickman notes that they were “[m]uch more naked. I can only hope that when I look again at the ‘90s volumes that I can remember the coded details and the sharp thoughts hidden between the safer lines.” It made me wish that he had the time to tell us his story in his own way. I was owed nothing, so this book is like a gift. It’s edited, of course, and I’m sure many personal things were taken out but I have no right to those.

Alan Rickman was a latecomer to acting, having worked as a graphic designer before attending the Royal Academy of Dramatic Arts at the age of 26. The diaries begin after the success of Die Hard, with a few entries put in at the end from the 1970s. I wish there was more of Normal Guy Alan who decided to change his life. He wasn’t exactly an overnight success and I’m sure there were some doubts to work through.

I have thought a lot about coming to one’s life’s work later in life. He writes about the conflict between doing work you believe in and work that pays which is probably the central conflict for many of us who want to create art of any kind. He wanted to do only real work and he seemed to know what that was for him, but what do you do when you don’t know what that work is for you?

I underlined the line, “If you want to do serious work, don’t be a circus act at the same time.” He was speaking of a very specific situation on a film set but I’ll probably think of it the next time I make a joke about my own goals. I am too often funny to keep from being vulnerable.

Alan Rickman was deliberate about building community about “[Putting] together a group of people who really have something to talk about and basically listen[ing] and enjoy[ing] their mingling.” I have recently realized that I need to be more deliberate about this myself. Adult life can be lonely if you, for example, live far from all of your friends.

Rickman himself seemed to know every actor in the United Kingdom (and many in other places) and he squeezed more out of every day than I think I ever have. He spoke about someone “[living] life in all directions at once,” which is exactly what I feel like he did. However, he was also a human being who complained about wasted afternoons watching garbage television. He referred to Extreme Couponing as a sign of the end of civilization.

Another reason why I think my fondness for Alan Rickman lingers after all this time (see what I did there?) is that he is also connected to memories of my mother. We saw him in both Private Lives and Seminar (the latter was life-changing for me as a writer who doesn’t technically want you to read my work). My mother died a few months after we saw Seminar and that memory is of one of the last good nights we had.

The Rickman diaries also cover the period during which Alan lost his own mother. I nodded along when I read about how he, “tried to rehearse the inside of my head for months now and as I write this I don’t know how much I have accepted.” No matter how well you think you’ve prepared for the end, it never feels quite real.

I think that this book may be a document for a very specific reader and I am exactly that reader. It meanders and sometimes can feel like a list of dinners and deaths. A depiction of a sex dream goes right into a notation that Nelson Mandela had walked into Parliament. I read it almost straight through and I feel as though I’ve just read something written by someone who did get to live the life he wanted, mostly as he wanted it. As I look at what I want (the rest of) my life to look like, there is something inspirational there. He was gone much too soon but he made the most of the time he had and he made an impact on so many lives, including, from a distance, mine.

The one thing I can never do is thank him. I would like to end with a thought from his early diaries when he felt that what he was working on was going in the wrong direction,“I should remind myself that things can be changed.” It may not be original but it is a good reminder that we are never as stuck as we think we are.