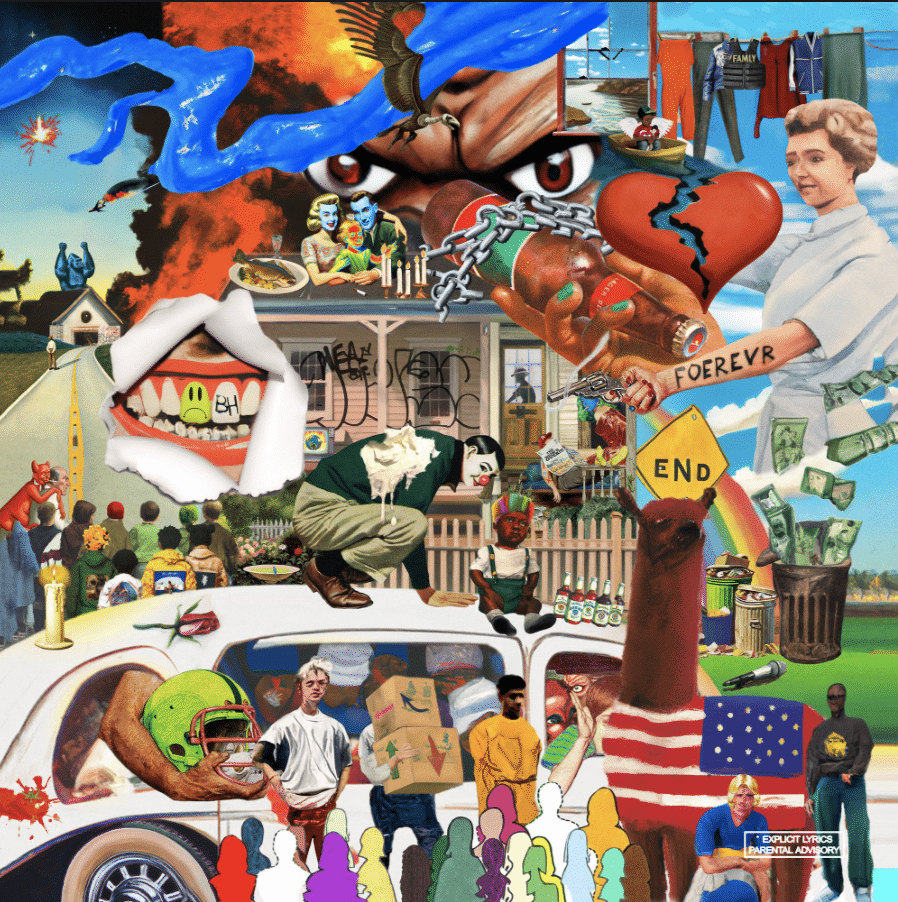 In an interview with The Guardian promoting BROCKHAMPTON’s 2021 record ROADRUNNER: New Light, New Machine, Kevin Abstract made what seemed like a shocking declaration: “I think this is the first album where I’m really tired of this boyband thing.” It’d been years since the SATURATION trilogy cemented their status as the self-proclaimed “best boyband since One Direction,” and despite their frantically prolific output – ROADRUNNER was their sixth LP in four years – the all-inclusive, tight-knit nature of the group still felt like a core aspect of their identity. In expressing a desire to distance themselves from the “boyband” tag, Abstract’s statement only reinforced that idea. They thought of themselves more as, “A community. Friends. Homies,” he explained. The group’s purported final album reaches for an even more powerful and unifying descriptor: The Family. On it, however, Abstract relays a deep feeling of weariness that has to do with more than just terminology: “Dead tired/ Feeling stupid,” he admits over strummed guitar on ‘This American Life’, “And I got nothing to say.”

As if to really the point home, Abstract repeats that line again and again. It fits with the overall vibe of The Family, whose existence is consistently framed as both a label obligation and a chance to tell the BROCKHAMPTON story in earnest. For fans, the end has felt imminent for a while now, with an undercurrent of melancholy and nostalgia flecking each one of their albums since at least iridescence. It wasn’t until earlier this year that the group officially announced they were going on an “indefinite hiatus,” before teasing what’s billed as their “final album” at Coachella. “It’s not a solo thing, it’s a group album,” Abstract promised, and though some listeners might be disappointed that it sounds a lot like the former, it actually plays a bit like both. Abstract handles all of the lead vocals, with contributions from Bearface and Romil Hemnani, and he directly acknowledges it’s somewhat of an oddly jarring send-off: “The group is over without being on the album,” he raps on the exhilarating ‘Big Pussy’. It’s hard to call it a Kevin Abstract solo project when BROCKHAMPTON is, both conceptually and spiritually, the absolute sole focus.

When Abstract isn’t charting the highs and lows of the BROCKHAMPTON, he reflects on how their unlikely trajectory personally impacted his behaviour in ways that further illustrate the group’s dynamics. ‘All That’, spinning the theme song from the 1990s Nickelodeon TV show of the same name, finds him describing how experiencing fame coincided with his addiction struggles, but stresses that healing was what they all collectively needed. Later, on the title track, he goes as far as to embody, rather than simply reflect on, the domineering, self-destructive leadership style that pushed the band to the edge: “I feel free when I drink, you don’t know shit about me.” The toxicity and turmoil that underpins much of The Family feels hauntingly familiar – there have been twinges of it along the way – but never have BROCKHAMPTON owned it with such raw conviction. This brutal honesty remains at the heart of The Family, even as Abstract identifies it as one of the problems that arise when you strive to turn everything into art.

As unsurprising as it is, it’s almost remarkable how bittersweet the album feels all the way through. There’s no celebratory moment without a pang of regret, no hopeful nod to the future that’s not couched in uncertainty. The juxtaposition between Abstract’s somber mood and Bearface and Hemnani’s lush, vibrant soundscapes is also to be expected, but for a record about the volatility and magic of a self-made group that found success after meeting on a Kanye West fan forum, it’s strange just how seamlessly, almost cozily its 35 minutes flow by. If you want a proper taste of BROCKHAMPTON’s shapeshifting, unpredictable energy, you’ll be better served listening to TM – the album they dropped as a “parting gift” to fans a day after The Family, though it was in fact recorded before it. On the whole, The Family comes off as pensive without quite being morose, thought-out but not quite calculated, a family affair but not really. TM sounds like a BROCKHAMPTON album; The Family is a farewell to everything it came to mean.

As often as the album revolves around the same ideas, Abstract seems wary of lingering on any one of them for too long. Most songs hover around the 2-minute mark, and even when they stay a bit longer, they don’t necessarily reveal much that fans wouldn’t already be aware of. Which is why the album’s closing run is so striking: from ‘The Family’ onwards, it sounds like one man trying to cap off the show by hitting just the right note, and even if they don’t all land with the same impact, together they convey the mix of frustration and gratitude that comes with drawing out the end of a chapter. He doesn’t really sound exhausted, just overwhelmed and ready to move on. Of all the biting truths Abstract spills on the album, this one from ‘Take It Back’ would in any other context probably be met with some doubt: “United we stand, divided we fall/ I’m sorry homie, but that don’t apply to us at all/ The next chapter is everything/ That’s my promise to y’all.” The Family makes it sound like more than a possibility.