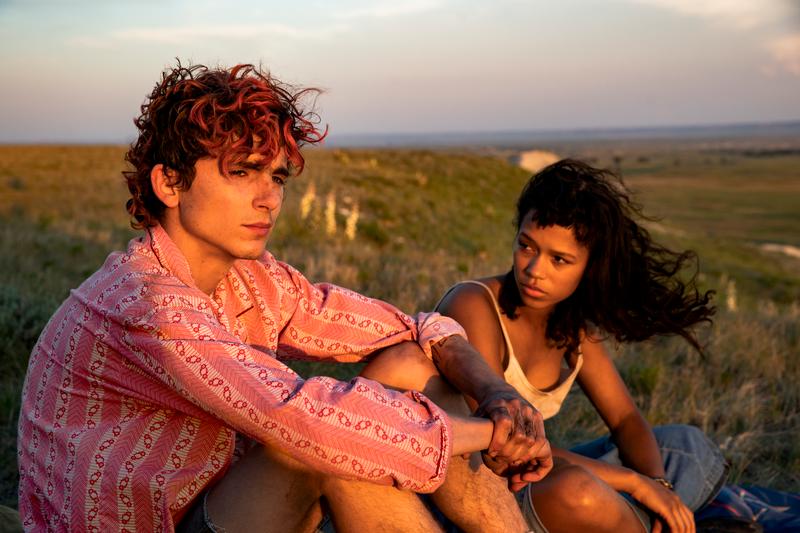 Writers: David Kajganich(screenplay by), Camille DeAngelis(based on the novel by)

Directed by Luca Guadagnino, ‘Bones And All’ is a film about romance, a coming-of-age story, and some times…a horror. The film tells the familiar teen love story, a road trip tale of two young lovers drifting from state to state, but the unusual factor is that their both cannibals. And while on this statewide journey they’re on the lookout for their next feeding.

‘Bones and All’ is a story of first love between Maren (Taylor Russell), a young woman learning how to survive on the margins of society, and Lee (Timothée Chalamet), an intense and disenfranchised drifter… as they meet and join together for a thousand-mile odyssey which takes them through the back roads, hidden passages and trap doors of Ronald Reagan’s America. But despite their best efforts, all roads lead back to their terrifying pasts and to a final stand that will determine whether their love can survive their otherness.

One of the most amazing elements of this film is Arseni Khachaturan’s cinematography, showcasing a vast range of point-of-view shots and organic framing, and incredible landscapes. It constantly reminds you that this is a road trip kind of narrative, and he carries that out effectively. The film also pulls a clever move at reminding you that it takes place in the 1980s without over doing the fact by bombarding viewers with over the top 80’s fashion, style and music.

‘Bones And All’ is clearly elevated by Taylor Russell and Timothée Chalamet’s performances, as the film’s script is rather thin, they still manage to find a way to carry the story out so viewers stay engaged. Guadagnino also does not go overboard with the horror, but there’s enough to cause a bit of discomfort.

‘Bones and All’ is romantic and at the same time unapologetically horrific. It’s a gem of a film that most reviewers are calling one of the best films of 2022.

‘Bones and All’ is out now.