On Christmas Day, the Prince and Princess of Wales walked around Sandringham church with their children, leading to an absolutely adorable moment between Prince Louis and his older sister, Princess Charlotte. In a viral clip on Twitter, four-year-old Louis can be seen running up to seven-year-old Charlotte with a bouquet of flowers.

He calls her name excitedly and then hands her the lovely gift in front of onlookers. Prince William then leans down towards his son and gathers him in with the Charlotte and their eldest brother, Prince George, as they continue their walk through the crowd. The adorable and affectionate moment warmed hearts everywhere.

This was Louis’ first time participating in the Sandringham walkabout, and he was wearing navy blue and dark red shorts for the special event. Charlotte was in a bright red coat which also wore to Kate Middleton’s Christmas carol concert, and a matching ribbon tied in her hair. George was matching his father in a navy suit with a bright blue tie. Princess Kate wore a dark olive green coat by Alexander McQueen with a matching hat by Philip Treacy, as well as a pair of brown suede heeled boots. She accessorized with gold earrings by Parisian jeweler Sézane. 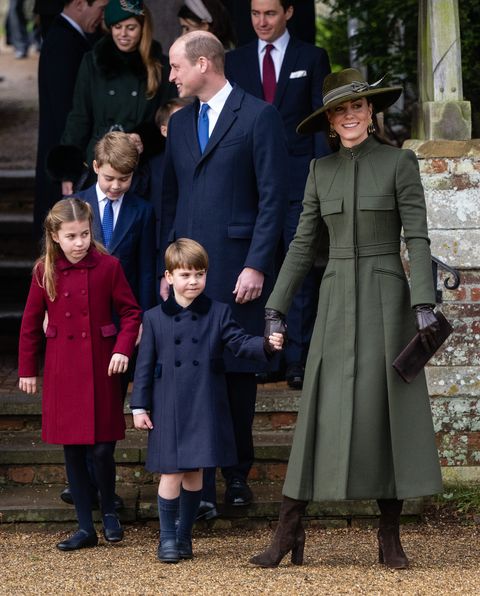 This was the family’s first holiday without Queen Elizabeth II, who passed away this September. They joined King Charles and Queen Consort Camilla this year at their private Norfolk estate, which is where Queen Elizabeth II had traditionally hosted everyone since 1988. The walkabout has always been a part of their festivities in the area as well.

The Waleses shared a lot of social media content to celebrate the season, but one of their most compelling contributions has to be this painting by Prince George, showing a snow covered reindeer being visited by singing red birds.

The family definitely had the Christmas spirit of giving this year.