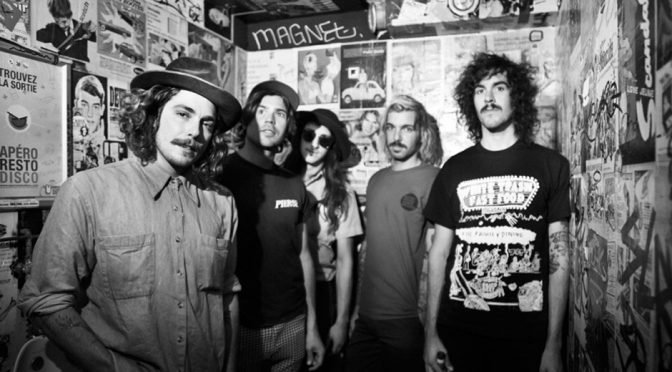 WARNING: This article contains descriptions of assault some readers might find upsetting.

Last week, allegations of sexual misconduct and abuse were made against several acts and employees associated with California garage rock label and record store Burger Records, which has now entirely shut down, including The Growlers. Frontman Brooks Nielsen responded to allegations against the band in a statement, denying them and and stating they’d be looked into “in as thorough, professional and unbiased manner as we are able.”

Now, Arrow de Wilde, lead singer of Starcrawler, has posted a new statement on Instagram, accusing the Growlers of facilitating sexual assault. She recounted an experience she had while touring with them in Australia in January, saying that she was sexually assaulted by a male stripper hired by the band, who were allegedly standing around her, filming the entire incident and laughing as she repeatedly tried to remove herself from the situation.

“The humour faded pretty fast when it just wouldn’t end,” she wrote. “I swear it went on for almost ten minutes. Every time I tried to get up he pushed me back down. It started to feel more and more degrading as each layer of clothing peeled off his body, the growlers just continued to laugh and film the whole thing. Soon he was down to a speedo and I knew where it was headed.”

In a statement to Pitchfork, Starcrawler guitarist Henri Cash corroborated de Wilde’s story: “Everything Arrow said in her statement is true,” she wrote. “We were locked out on stage but, after pounding on the door, we were able to get into the room and saw a naked man standing over Arrow. Arrow was very upset and told me the whole story right after in the bathroom. We were all shocked and horrified and didn’t know what to do.”

Brooks Nielsen has now responded to the allegations in a statement posted to the band’s Instagram. “I apologize for my actions, and for any band members, that have hurt, offended, or damaged any person or made anyone feel less than 100% safe,” he wrote. “I take full responsibility and accountability for the behavior of all Growlers’ band members, past and present.” He admitted that he “arrang[ed] a male stripper as an end-of-tour prank to dance for the great Arrow de Wilde” and called it a “lack of judgment”. Nielsen also revealed that co-founder and guitarist Matt Taylor, who “adamantly denies” any allegations made against him, is taking “temporary leave from the band”. He added that he would be “working to raise awareness and as much money as [he] can for Time’s Up, East Los Angeles Women’s Center, and other organisations that support women who have suffered violence, abuse, and discrimination.”

On July 21, shortly after the band’s now-deleted response to a number of accusations against them, keyboardist Adam Wolcott Smith The Growlers quit the band, admitting to an incident of sexual assault and stating: “I’m not innocent in abuse.” That statement, viewed by multiple sources, has also now been deleted.

If you or someone you know has been affected by sexual assault, we encourage you to reach out for support: