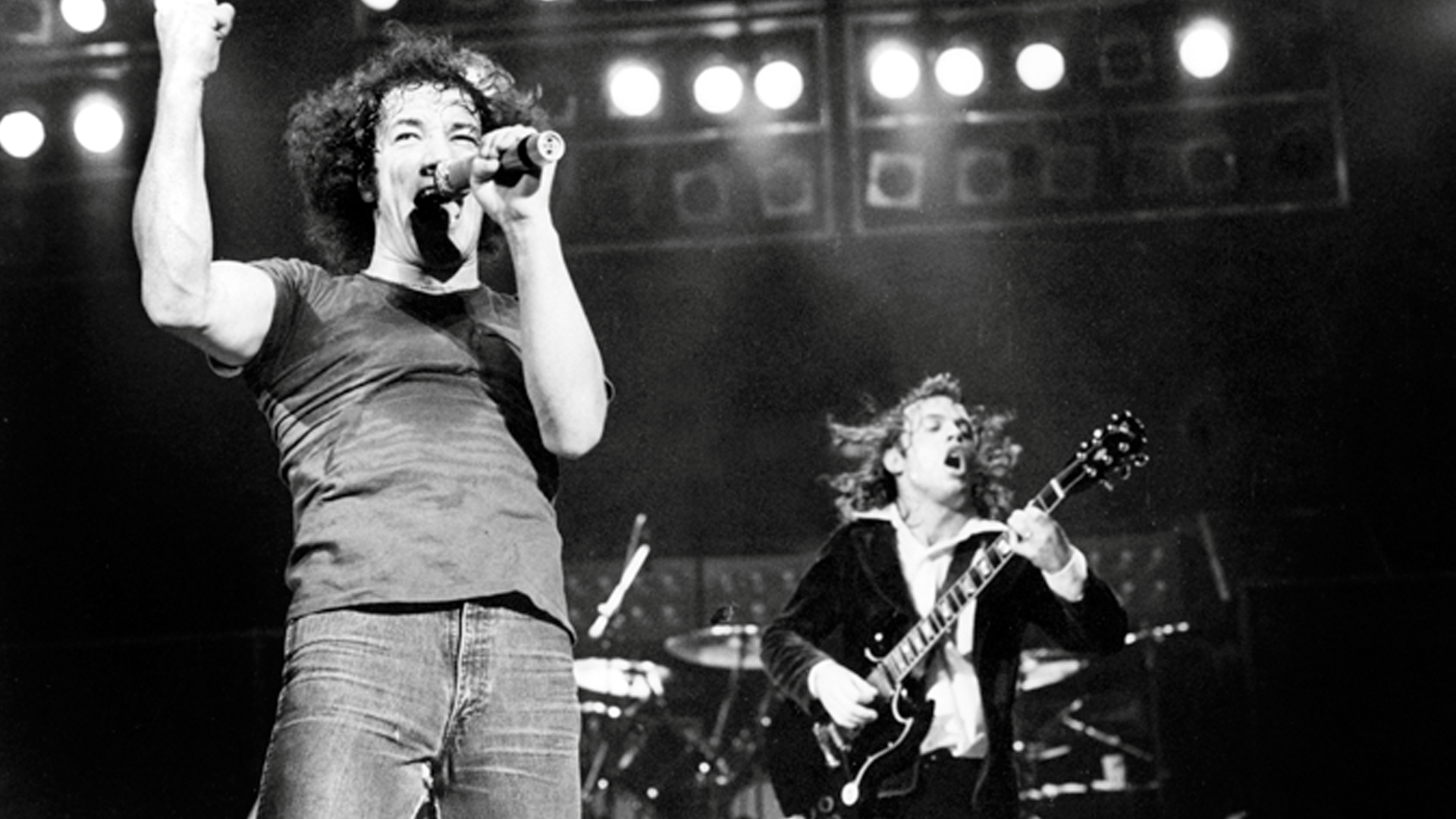 In this series, we take a deep dive into a significant song from the past and get to the heart of what makes it so great. Today, we revisit AC/DC’s ‘Hells Bells’, a tribute to the late Bon Scott that’s also one of the most ambitious songs the band have ever penned.

Picture this: the year is 1980, one of the biggest rock n’ roll bands have tragically lost their lead singer, and just a few months later, you’re holding their new record, boldly titled Back in Black. Instead of the straightforward, no-frills riff you might have expected the record to open with, you’re treated with the slow, funereal sound of a church bell. It doesn’t take long to realize exactly where you are. It was only a year ago that the Australian rockers had released their commercial breakthrough, Highway to Hell, so it only makes sense that their newest one would transport you right into the fiery pits of hell. But where ‘Highway to Hell’ immediately comes off like it’s all just in devilishly good fun, ‘Hells Bells’ sounds ominous and foreboding. Add to that the fact that the guy AC/DC have decided to replace Bonn Scott with, Brian Johnson of the British glam band Geordie, was spitting out lines like “You’re only young, but you’re gonna die”, and you might feel a bit alarmed.

Except, not really. Sure, it takes a full one-and-a-half minute for guitarist Angus Young and company to break into their familiar, mid-tempo guitar riff schtick. And yes, there’s something grim and perhaps even menacing about opening your new record with a song sung from the perspective of Satan ready to take you to hell right after the beloved singer of your band has died. (Later on the record comes a song called ‘Have a Drink on Me’ that’s about exactly what the title implies, which seems harmless until you remember that Bon Scott died after a night of heavy drinking – the police ruled it “death by misadventure.”) But it’s also oddly fitting, a band making a statement simply by continuing to do what they do best: kicking ass. And whatever subtext you might want to attach to it, it becomes no less true that the band have once again managed to make eternal damnation sound like a hell lot of fun.

Still, it’d be unfair to dismiss just how ingenious of a move it was to include that church bell. For one thing, it was not an easy sound to reproduce: engineer Tony Platt was tasked with recording the 2000–pound bronze bell, manufactured by John Taylor Bellfounders in the Leicestershire town of Loughborough and ordered by AC/DC for their next tour; but when he arrived in the town, the bell hadn’t come out of the mould yet. Attempts at recording another bell from a nearby church were unsuccessful; in Platt’s own words, “the first thing we’d hear was this mad fluttering of wings as pigeons flew away” (I, for one, would love to hear that version of the recording.) So that idea was thrown at the window, and Platt had no choice but to go back to the studio and record the custom-made bell as soon as it was ready. As Platt recalls: “The bell itself weighed one ton because that was the largest feasible size to take on tour, but the pitch of the bell as you hear it on the record is an octave lower than the actual bell; it was slowed down to half–speed to replicate the sound of a two–ton bell that would have been impossible for the band to take on the road with them or to hang in the venues.”

Platt talks more about the technical details of capturing that sound here, but in short, it was an arduous process, though one that definitely paid off. Not only did was it mournful enough to honour Bon Scott’s memory, but it also introduced an element of theatricality to the band’s subsequent live shows and became an essential part of their iconography – one that was replaced only a year later by the iconic cannon that came with ‘For Those About to Rock (We Salute You)’. But where the use of the cannon was more or less the product of coincidence, the church bell was imbued with at least some symbolic significance. Not only did act as a necessary sonic transition from Highway to Hell to Back in Black, but it also added a kind of dramatic weight to the track, especially coming from a band mindlessly devoted to the classic rock n’ roll formula. Sure, AC/DC were no strangers to an epic build-up; they would go on to master the technique with ‘For Those About the Rock’, and a decade later, ‘Thunderstruck’. But there’s something elegiac and perhaps even subtle about the way Angus’ guitar melody creeps into the mix, a quality that’s somewhat lost in the group’s sped-up live performances of the track (though the massive crowd’s phantom-like singalong normally makes up for it, especially during this 2009 show).

The dramatic shift indicated by the song’s intro is accompanied by a narrative one in the form of Brian Johnson’s lyrics, which seem to be in direct conversation with Bon Scott in ‘Highway to Hell’. “Hey, Satan, paid my dues/ Playing in a rocking band,” Scott sang on that track, and now Brian Johnson answers back: “I got my bell, I’m gonna take you to hell/ I’m gonna get you, Satan get you!” he howls, reaching into a register high enough to satisfy the demands of any AC/DC fan. But Johnson delivers his lines with a sort of wink, proving that the band still have a good amount of humour in them: “If you’re into evil, you’re a friend of mine,” he sneers, displaying a kind of playfulness that’s amplified in his later live performances (he stopped touring with the band in 2016 due to ongoing hearing difficulties.)

Adding even more heft to the track’s somber atmosphere are the multiple allusions to catastrophic weather phenomena of all kinds. As Johnson tells it, he was having difficulty writing the lyrics for the song until a tropical storm began – which he of course interpreted as a sign from Scott. As he recalled in an interview with Classic Rock: “Mutt said, ‘Listen, thunder!’ And I said, ‘That’s rolling thunder, that’s what they call it in England.’ He says, ‘Rolling thunder, write that down.’ And this is true, it went ‘Boom!’ The fucking rain came down in torrents, you couldn’t hear yourself … I was gone. The song was ready that night. I hadn’t even heard the track ‘cause they were busy doing it. It was whacked down in the greatest haste.” Johnson might humorously insist that he was just “literally giving a weather report!”, but he was also introducing himself as a force of nature to be reckoned with, and thus, worthy of his new gig as the singer of a band who literally used a high voltage symbol in their logo.

Needless to say, it worked: not only was Johnson immediately accepted by the band’s legions of fans, but he – along with his oversized flat cap – is also considered to be an integral part of the band’s legacy. But with a lot of rock n’ roll classics seemingly losing their relevance in a contemporary context, perhaps the real question isn’t so much whether it worked at the time, but whether ‘Hells Bells’ and the album as a whole still hold up after all these years.

I’ll admit that were it not for the 40th anniversary of Black in Black, I would have practically no reason to revisit the album or its opening track. It’s not so much because of the general lack of substance or the repetitiveness that’s often associated with the band’s songwriting, but more so the fact that the music just doesn’t resonate with me in the same way. It also reminds of a time in my life when music was little more than a marker of ‘cool’: when I was as young as 10 or 12, I distinctly remember our music teacher asking us to bring a song to play at the end of class, and practically every boy chose a song by AC/DC (I was a fan, too, but thought I was edgier for having picked Three Days Grace, so joke’s on me). Whatever you think of the band’s music, there’s something unique about the way it’s managed to stand the test of time, even if it’s precisely because of how rudimentary and uncomplicated it can be. Just like Angus Young can still pull of that schoolboy uniform in his 60s, teenagers will continue to listen to AC/DC, because the qualities that render their music enjoyable will always stay the same.

There are a lot things to criticize AC/DC for – as The Observer’s Kitty Empire put it, Back in Black is “built on casual sexism, eye-rolling double entendres, a highly questionable attitude to sexual consent […] and a crass celebration of the unthinking macho hedonism that killed the band’s original singer.” She also named it her favourite album – like many critics reappraising the album decades later, she acknowledges just how much of a triumph the record was without ignoring some of its problematic lyrics, which are perhaps the only thing keeping it from not feeling dated. But ‘Hells Bells’ shares virtually none of these faults. Only a group like AC/DC could turn death into the butt of the joke while also respectfully paying tribute to their recently deceased frontman, a comeback most bands would probably need years – not mere months – to perfect. There was little doubt that AC/DC would keep on doing their thing and doing it well, but the opening seconds of ‘Hells Bells’ feel like a brief acceptance of the real darkness in the world, one whose echo persists long after that church bell is replaced by Angus Young’s killer riffs.