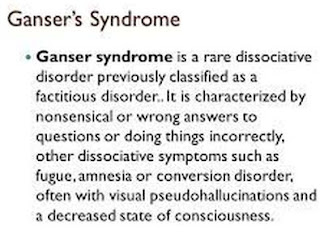 And to say or think that some UFOs are interplanetary –
without a shred of evidence, except perceived technical speed and maneu- vering –
is, I stress again, faulty, illogical thinking.

To guess that UFOs are interstellar or otherworldly flying
machines is fine but to conclude that UFOs are actual craft from an off-Earth
civilization or non-human species is a bit much.

Such thinking is pathological in nature, a plea for a
fantasy without substance.

Now, a few of you fellows think you’ve got a legitimate leg
to stand on with your ET-oriented UFO explanation, but you’re wrong, but more
importantly, devoid of sense: Enmeshed in the Ganser Syndrome which is a kind of hysterical pseudodementia.
The cause of your mild pathology derives from the onslaught
of fictional output that you’ve integrated as cognitive input. Not your fault
entirely, but a lapse of intellectual discretion. Why? That for a therapist.

Yes, the suggestion that UFOs come from outer space is not
ignorance of a grand kind; it makes a little sense. But with full scrutiny of
the “evidence” the idea falls apart, not as a speculation but as a matter of
actual fact.

Nothing has come forth within the current history of the UFO
phenomenon to allow any conclusion, let alone the conclusion that UFOs are
spacecraft from other worlds.

It might be time to look for another answer to the UFO
enigma, one that might have some validity.

To wait for government or military “disclosure” is one more
step into Ganser and you don’t want to do that.